Top of the League!

It would have been hard to write up a better start to the season for Arsenal, maybe with fewer injuries. Still, things are going right for Arsenal. They had a great chance to put up a massive point total with a light schedule and have taken full advantage of it. There are no more easy matches in the Premier League, just ones that are less hard (Bournemouth might be excluded).

Arsenal 2-1 Aston Villa: By the graphics 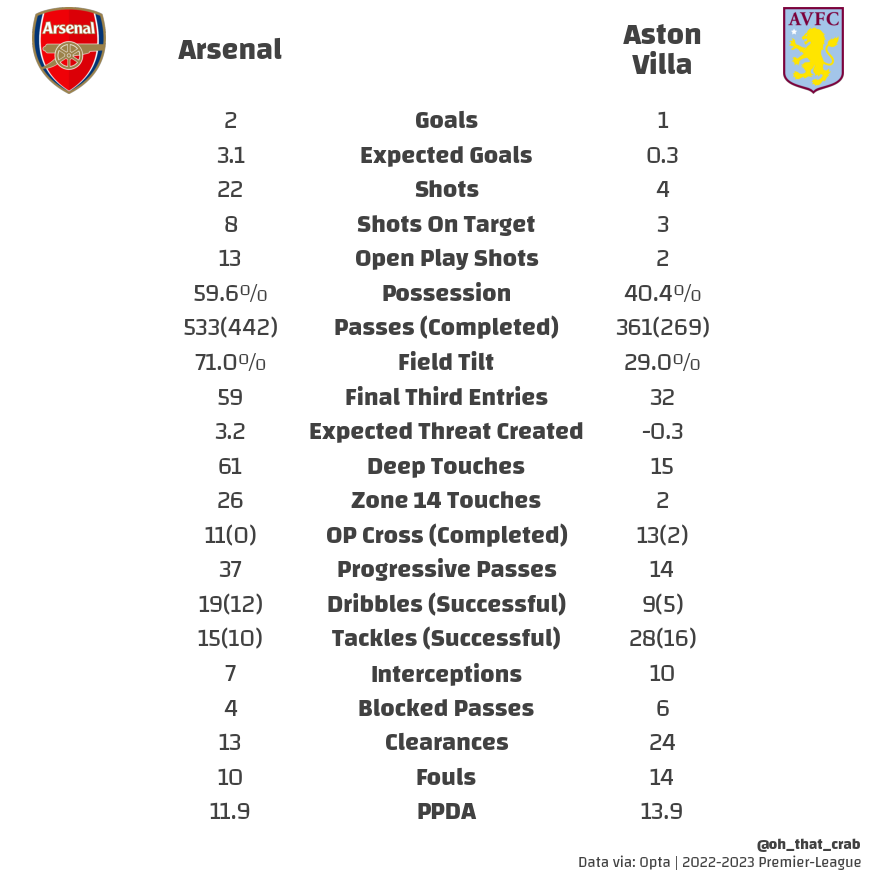 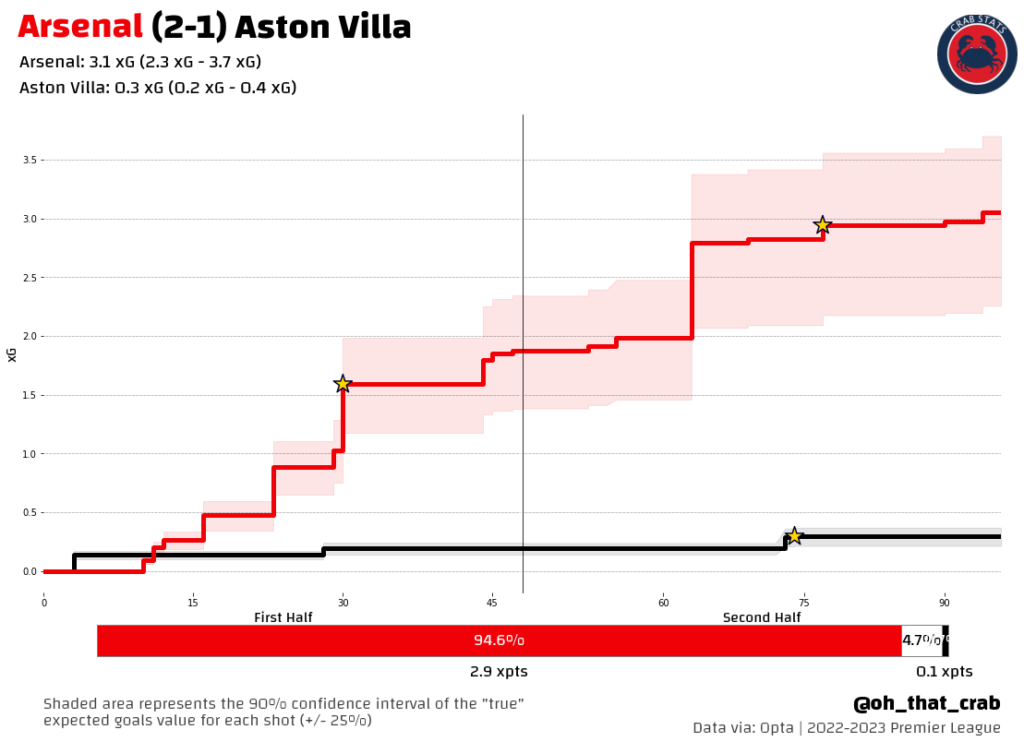 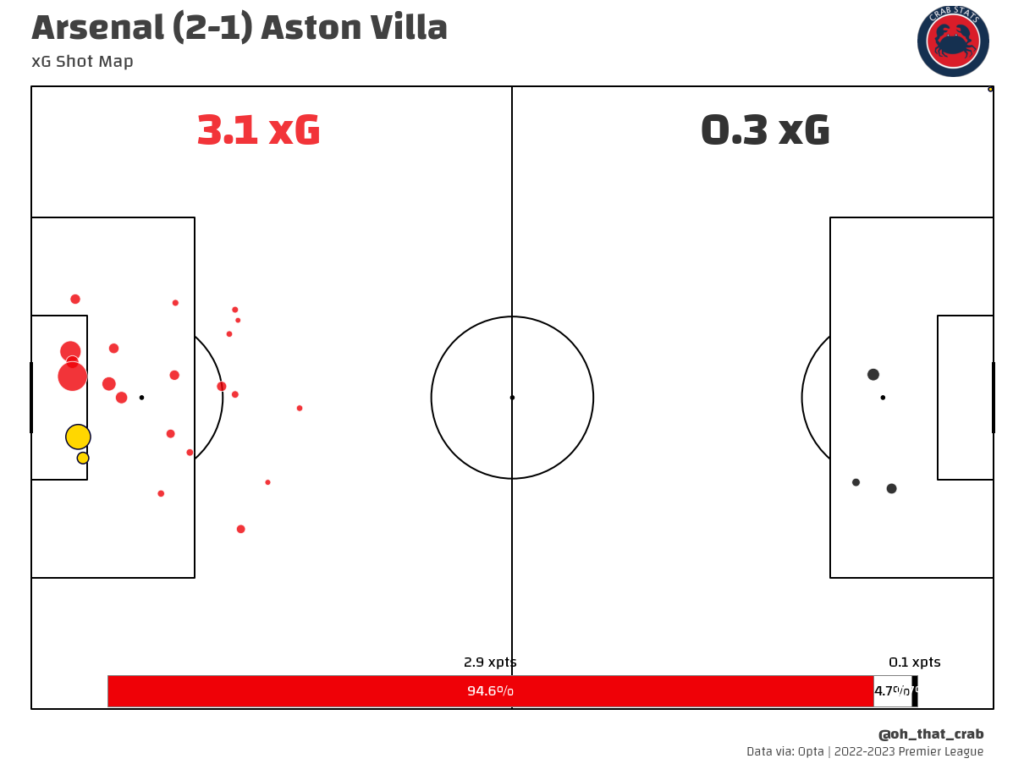 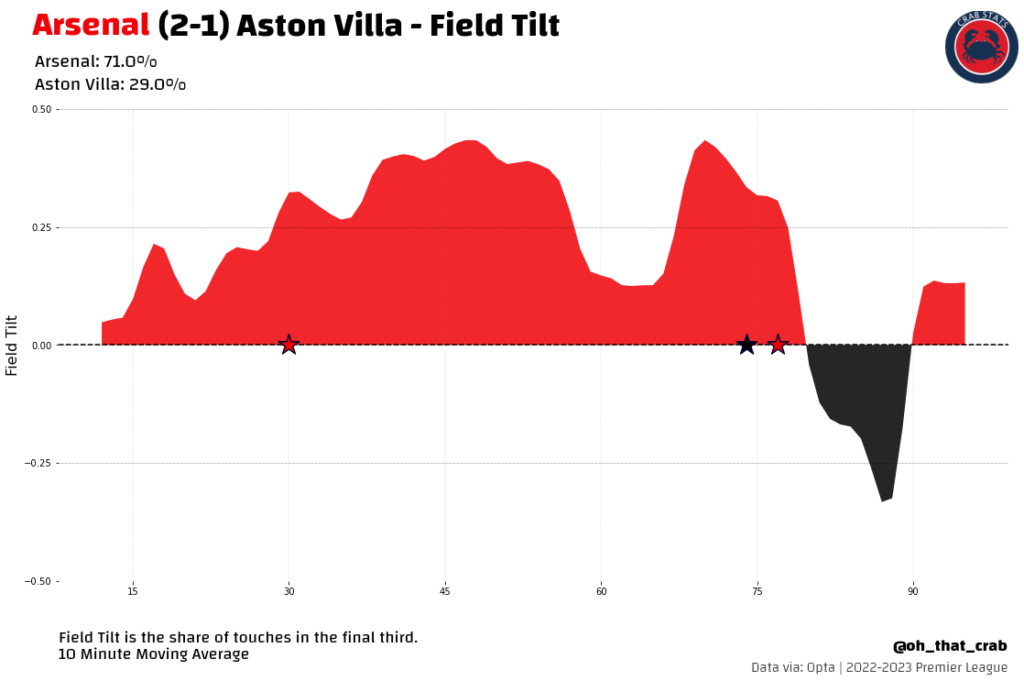 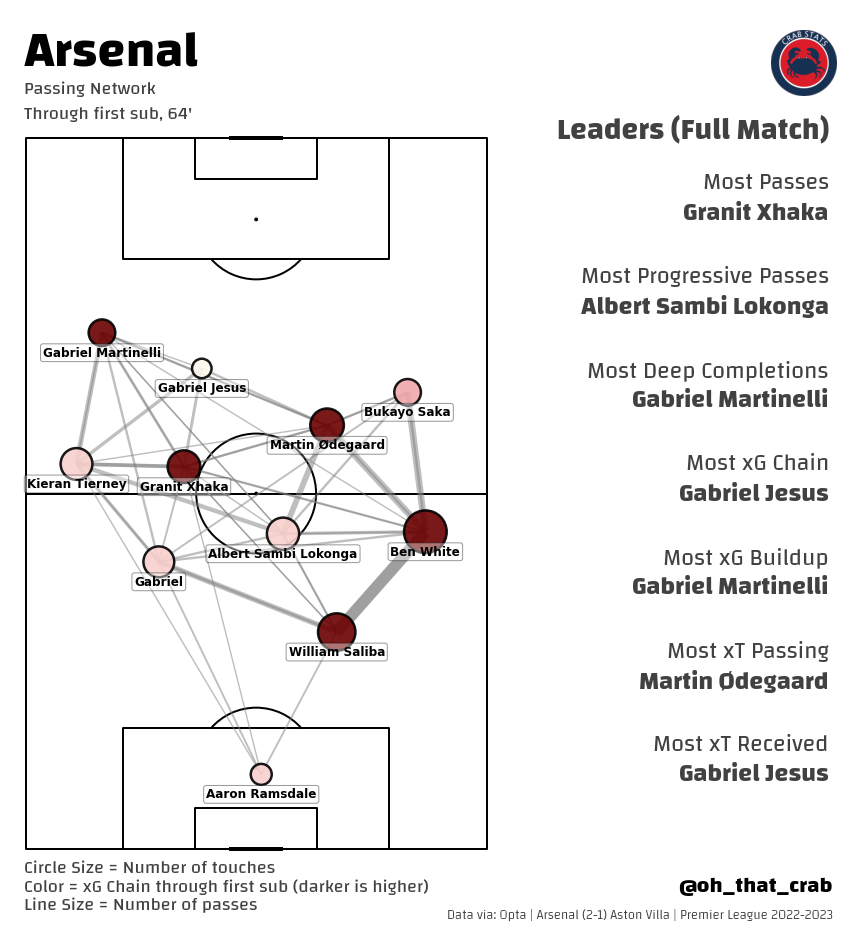 2* – Shots in the second half by Aston Villa. *I don’t know if the corner for a goal was truly a shot but it does go down as one. These shots had 0.1 xG

This is probably up there with the Bournemouth match for the best overall performance for Arsenal. Arsenal were pretty dominant the whole match in this one, Aston Villa got a little more of the ball after the second goal but still failed to threaten too much (with Arsenal offering significantly more threat on the break).

Overall this is a match with just a bit better finishing that could have seen 3 or 4 goals.

With some very good finishing, this could have been like the 6 goals Manchester City scored with similar shots (they actually had lower xG on their 6 goals, with 2.8 expected from my model).

Martin Odegaard is getting going 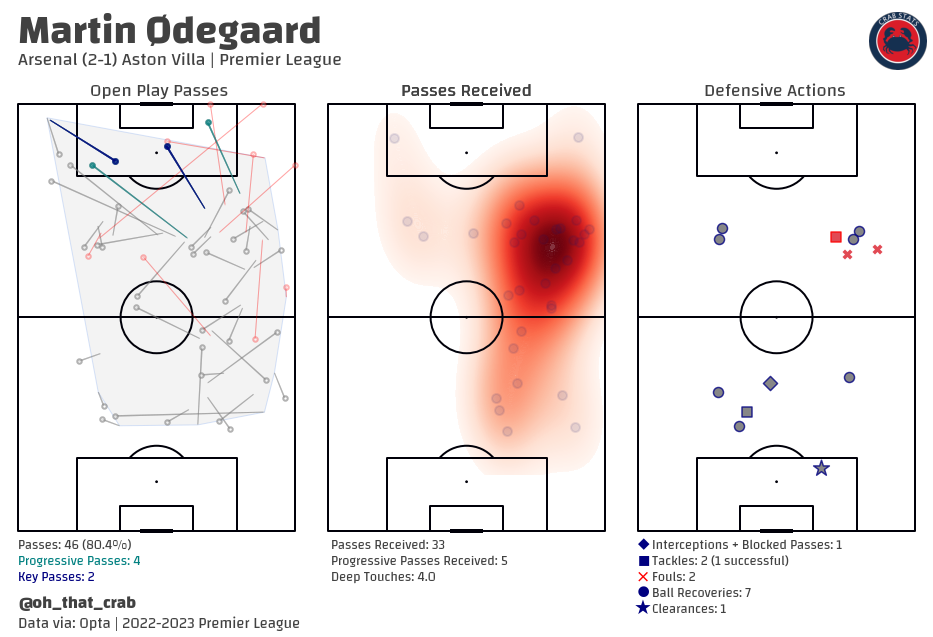 79.6% – Pass completion percentage with a 102.8% Pass Efficiency meaning he completed more passes than the expected model would have predicted.

4 – High Ball Recoveries (within the attacking 40% of the pitch)

After a couple of “quiet” opening matches, Odegaard has really come alive in the last few matches. Maybe it needed a few games to adjust to playing with the different style of Ben White at fullback (who has done really well there but still plays the role differently) but he is looking like he is back at his best and maybe even better. In this match, I think he found a very good balance of dropping deep to help get the ball into the final third and making himself available for others to find him in those pockets of space.

The progress is looking good for the captain.

Sambi does well with his chance 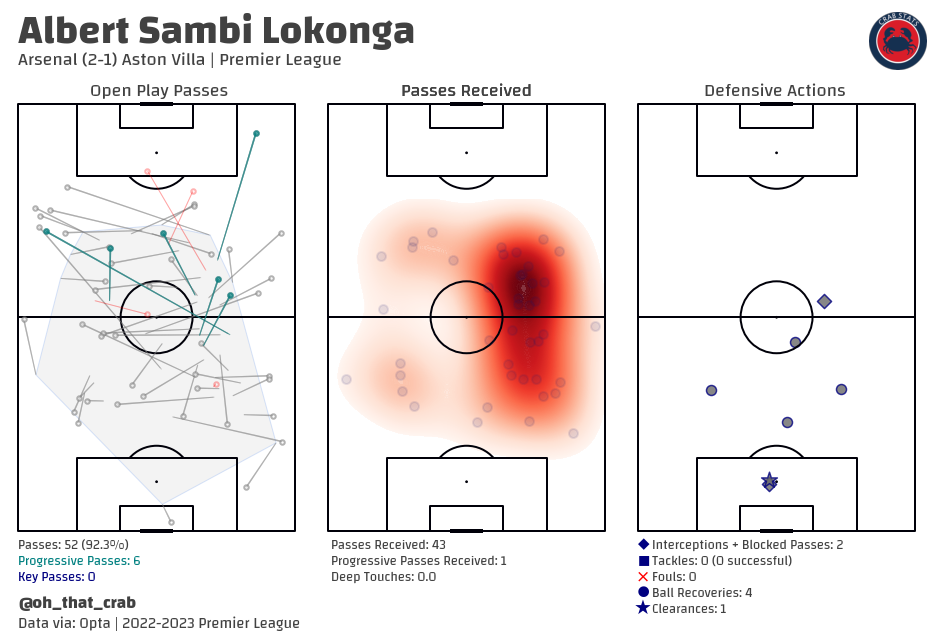 6 – Progressive Passes, 1st among all players 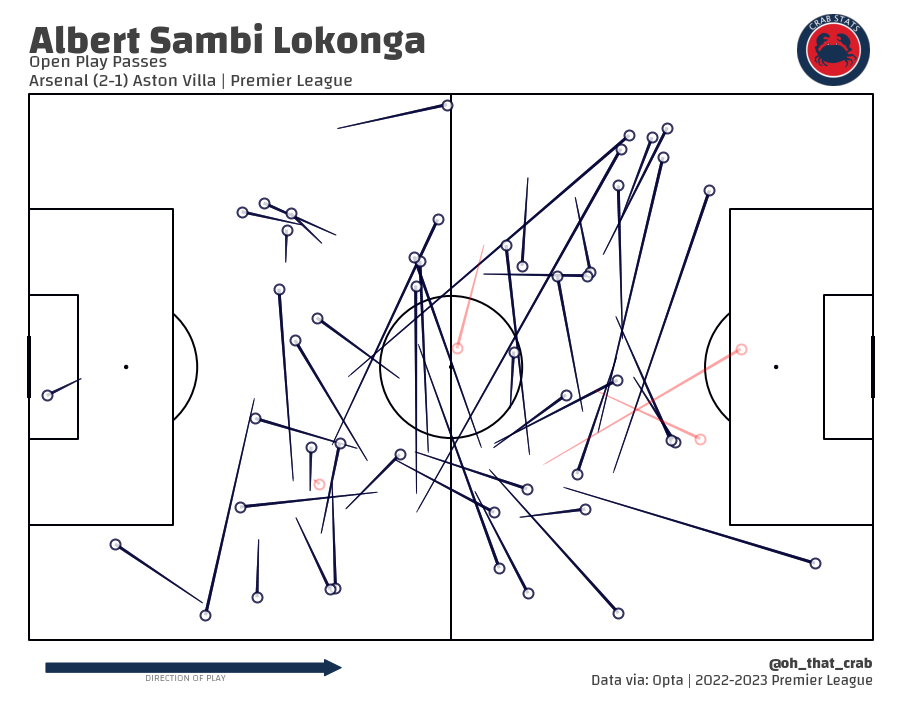 2 – Times Fouled (again Villa were out to kick Arsenal)

In the buildup to this match, there was a lot of debate and conversation about what Arsenal should do with the injury-caused hole at defensive midfielder. People (including myseld to be fair) pondered different shades of exotic options for moving players around. Ultimately Mikel Arteta went with the simple option of just picking the guy next on the depth chart.

Sambi looks like he repaid that trust in this match. He had a good match and generally keep things simple in the Arsenal half (very Elneny and probably exactly what was asked of him) but showed his ability to be progressive when in the attacking half, including a number of very nice switches of play.

I think that this performance warrants him to keep this spot at least until the injury crisis subsides.

Sources: Opta via whoscored, my own database. StatsBomb via FBRef

Here’s one a lot of people seem to be missing.

3 – Balls hoofed by Kieran Tierney that are now orbiting Saturn.

Yeah he doesn’t have the same technical level under pressure, he did have some good overlaps that I don’t think you see from Zinchenko. Nice to have different flavors at left back

I was there at the match and Villa were poor (eg their right back did a lot of poor passes) plus we were good though could have made more of it with a bit of luck (see the XGs above). Hope we can continue the results we’ve been getting when playing at United.

Love that we keep scoring in the next few minutes after conceding, shows great spirit. I’d would prefer us not to concede, though how their goal wasn’t a foul I’ll never know.

Can anyone explain how it is not a foul on Rammers? Because the Villa Player has two arms around rammers behind his back. He’s locked in. Terrible decision. How that cannot be seen on review is staggering?!

it shouldn’t even have been a corner, Ramsdale clearly didn’t get anything on the shot

Undoubtedly impressive Arsenal stats but somewhat let down, ultimately, by poor finishing I think. I’m sure Arteta can/will address this but for all the team’s fine efforts yesterday, good football, possession, the fight back etc., it still came down to two goals out of three against pretty “average” opposition (and for the second game running too). I don’t see that we can afford to be wasteful against better opponents – not least because there probably won’t be that many chances. We should all be pleased with the great start of course, but I think we should be just a little… Read more »

Apart from Saka’s empty goal chance can you bring up another example of wastefullness?

Eight shots on target, thirteen shots in open play – 2 goals. What I’m saying is (and Arteta said basically the same post match) is that we need to improve on that.

I think Odegaard (and to a slightly lesser extent, Xhaka) was careful to make sure that Lokonga was rarely isolated under pressure. It never seemed like he was in any danger of being overrun or making hurried (or worse, panicky) decisions.

Lokonga is a class player. We need a midfielder for depth, but I think this will be Sambi’s season.

I find the Lokonga graph a bit puzzling. Fx it says that he has 100% long passes but the graph has many grey ones.
Also that there are no fouls but I can remember the elbow to the c*nt who injured Ødegaard. Btw Lokonga raised his elbow close to his ribs while the c*nt raised his above his shoulder. Yet he ended up complaining about Sambis elbow

Grey ones are completed passes, the red/pink are incomplete

Love these posts Scott. Can you clarify for me what counts as an OP cross? I saw we had none completed but I’m thinking of Martinelli playing it across the box for that Saka tap-in in the first half for example.

it can be a little fuzzy around the edges. generally, it is from the edge of the box to the sideline so things that start inside the box don’t count as a “cross”