Winning at Stamford Bridge isn’t for everyone.

Going into this match Chelsea hadn’t lost at home since April last season when they also lost to Arsenal.  Over the last 3 seasons (counting this one) Chelsea have lost 7 times at home in the Premier League, 3 of which have been against Arsenal.

Stamford Bridge is starting to feel like a home away from home.

Chelsea 0-1 Arsenal: By the graphics 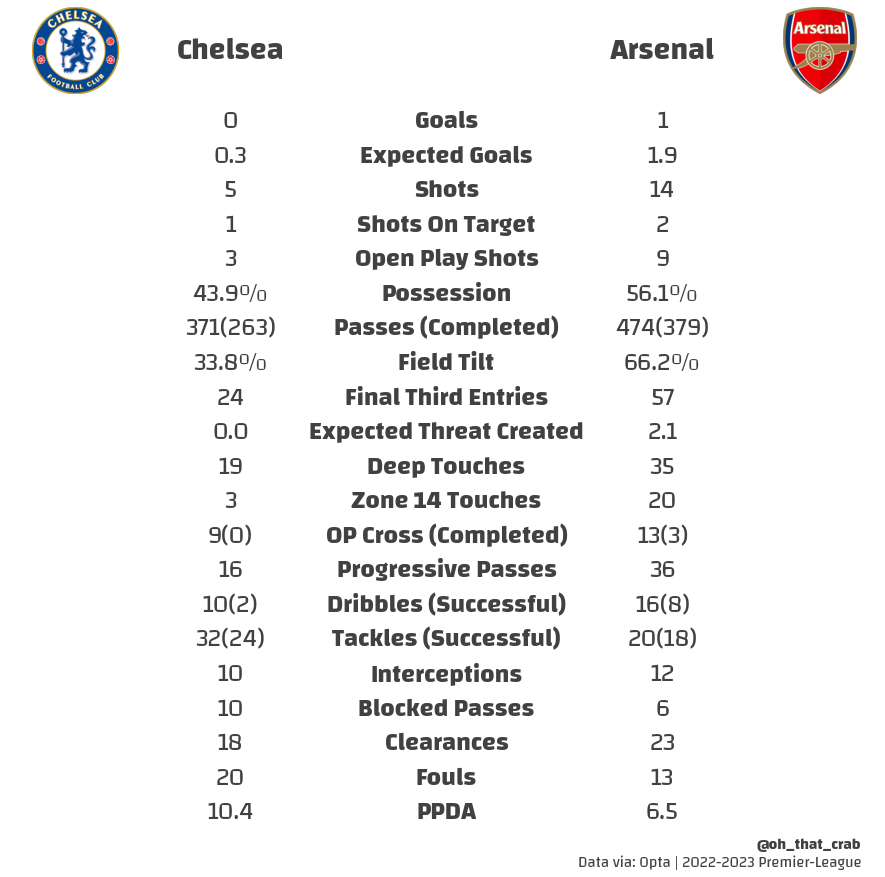 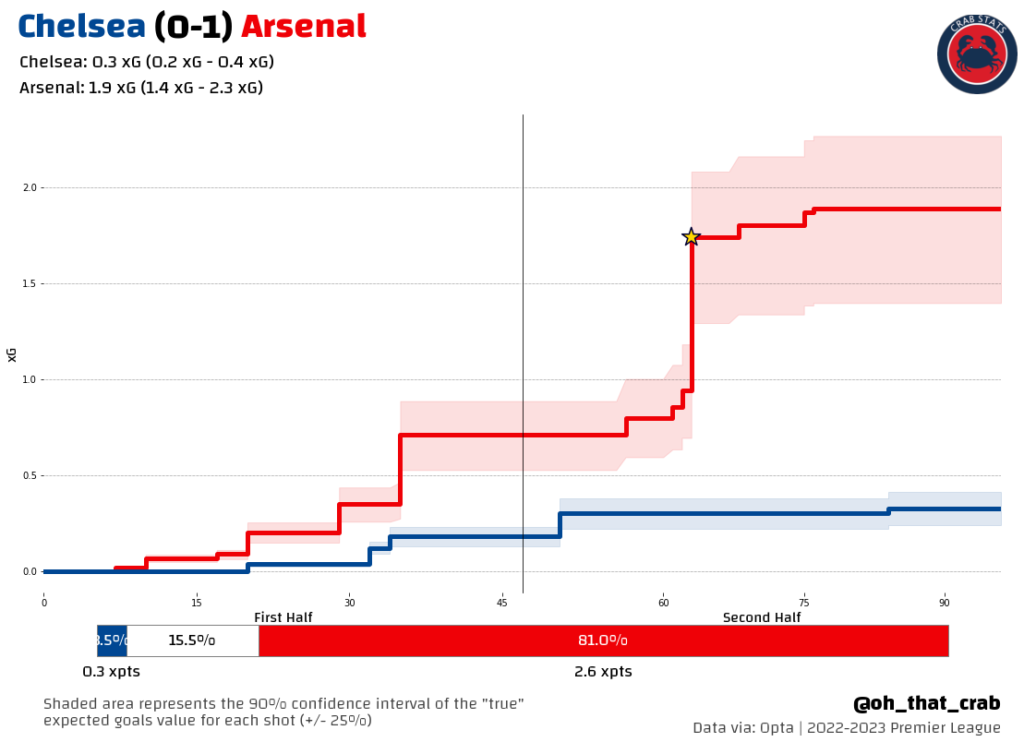 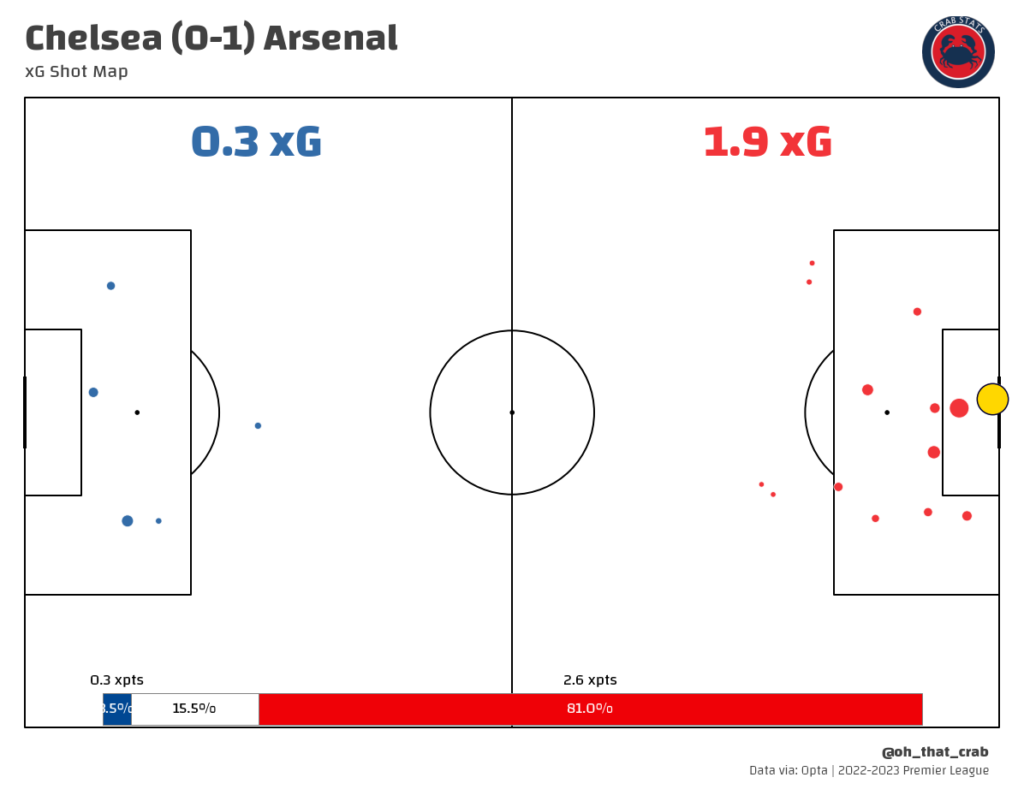 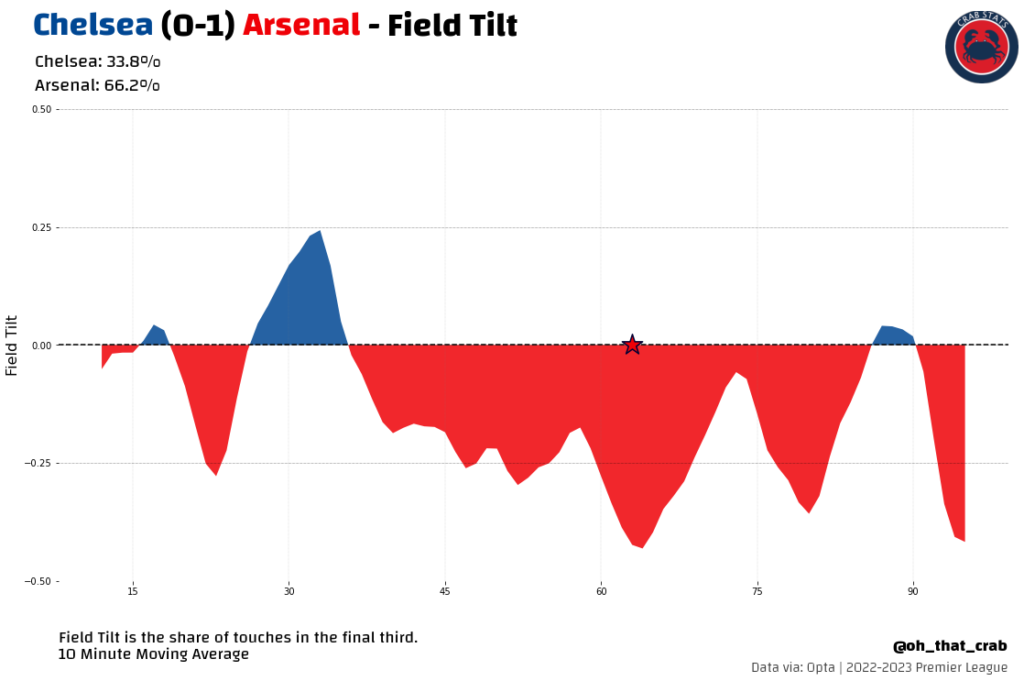 1.96 – Expected Goals (xG) for Arsenal, rounding that to 2 that is the 7th time this season that Arsenal have had 2.0 or higher xG in a match. 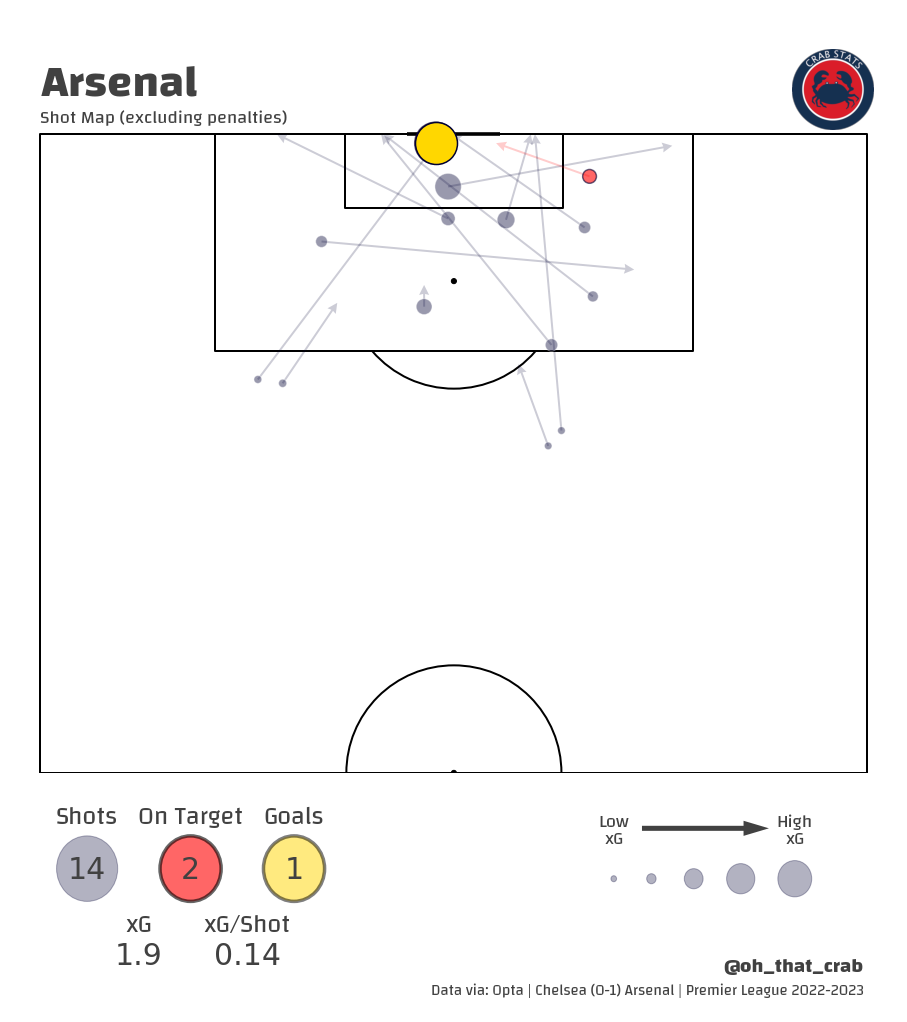 5 – Shots for Chelsea, tied for the fewest they have had in a match this season

0.3 – xG for Chelsea, their lowest total for the season

2 – Shots in the second half for Chelsea

7 – The number of times that Arsenal have held an opponent under 1 xG this season. 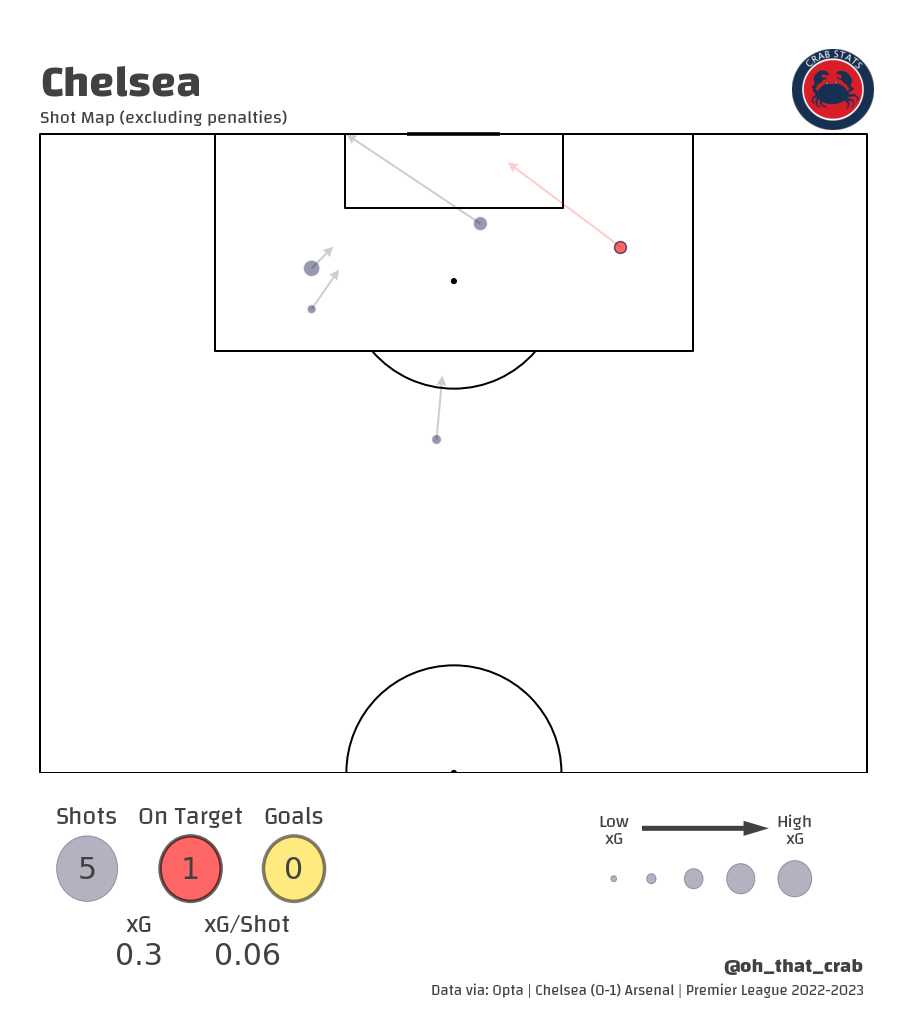 Arsenal’s attack has been impressive this season but I think one of the biggest reasons that they are currently top of the table is the defense (well really both but still…). In this match, Arsenal were rarely put under much pressure. Chelsea had 15 touches in the box in this match, three of those came as the result of a corner kick that didn’t result in a shot.

In the second half they had one in the 49th minute (the result of a bad Saliba touch) and then didn’t have another one until the 75th minute. Even chasing the game they managed just 3 overall touches in the box after going down a goal.

Arsenal’s defense just didn’t allow them to do anything. Arsenal pressed effectively in this match. This was Chelsea’s lowest overall passing percentage this season, Arsenal held them to just 83% passing in their own half and forcing them to go long over and over under pressure. Arsenal ended up with 15 High Ball recoveries (in the attacking 40% of the pitch) in this match compared to just 7 for Chelsea.

5 – Pass attempts, the fewest among all players that started this match. He completed just 3 of them.

Just some stats, nothing personal Pierre.

William Saliba is just so good 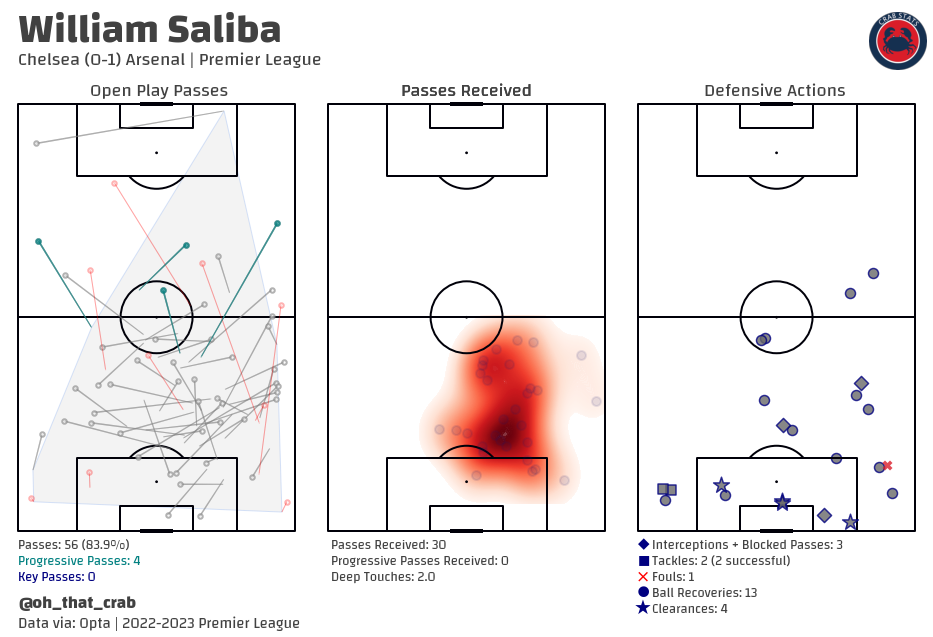 0.3 – The amount of total xG build-up he was involved in, most of all players.

1 – Blocked shot, saving his own error leading to a shot

William Saliba just oozes calm and cool. I don’t really know how to quantify things like that. There are no times that he seems rattled. Even after making a mistake today, he is able to recover and clean up his mess.

He is just a phenomenal player and deserves all the plaudits that are coming his way.

Bukayo Saka bounces back from his injury 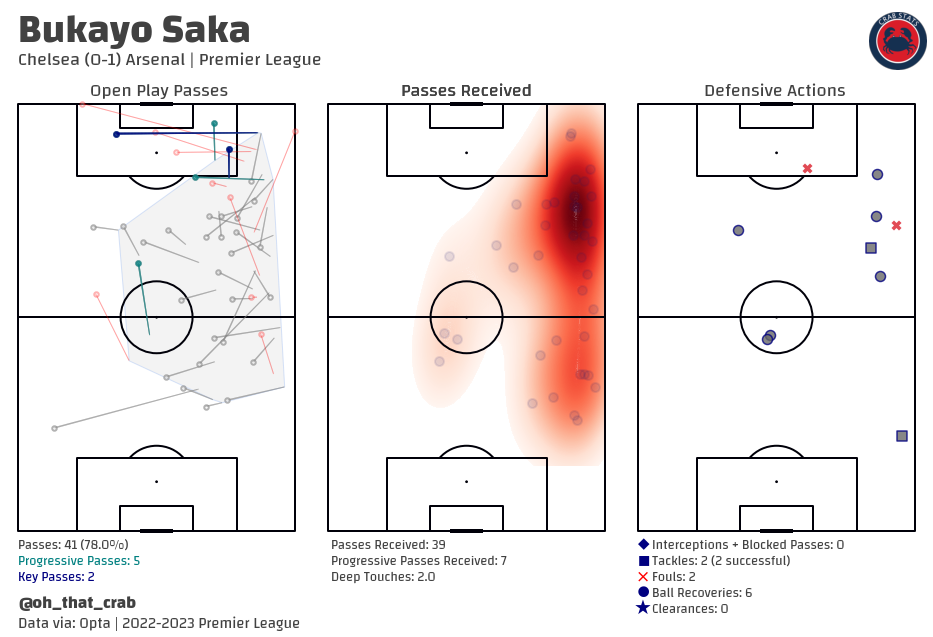 1.02 – xA, most of this comes from his assist of Gabriel’s goal which might have been going in regardless

2 – Times fouled (that were called)

Bukayo Saka didn’t have his best match but he was incredibly influential. I think that is one of the things that makes him special, even when he is off his best he is adding incredible value to the team. He was a bit isolated with Arsenal preferring to attack down the left but when he did get the ball at his feet his ability to cause problems was apparent and a major problem for Chelsea. Some day he will get the respect he deserves and the foul calls that actually happen.

Sources: Opta via StatsZone, FBRef, my own database

Correction: It was said that Chelsea hadn’t lost since April of last year, when it should have said April of last season. I regret the error and have corrected it.

1. The position we occupy in the league.

In every league! PL Europa, Academy, WSL – and Tony Adams dances on too!

Just watched the game finally. Shut those blue fuckers down! Zinchenko is just a game changer. I honestly think we’re a legit chance if he’s healthy. We’re a completely different team. So dominant. Loved when Saka kicked they’re bollocks lb after his 1000th foul. Worthy yellow. Should have gone the other way. And xhaka. Honestly, this is a different player. No one can convince me he has ever played at anywhere near this level previously with arsenal. He was rubbish in years past. Last year, decent before that just not up to scratch. Now he’s one of our key players.… Read more »

Incredibly strong performance away from home, against a team with a solid home record. Looking great going forward and staying back. Hope the players all stay fit and we keep performing at this level. Already a great season so far, let’s hope we can keep it going!

A good away win, and one which we had to get so well done again to the youngsters. We played some really impressive stuff but (and this will get the negative votes) I still don’t think our finishing reflects our build up play. We should have won that game more comfortably, particularly as Chelsea really weren’t that good. OK, we got the three points which is all that matters, but we’ve seen recently (against Southampton) what can happen if we don’t put more chances away when leading 1:0. There’s always a risk. I really hope that we can turn more… Read more »

It will happen. There are goals from every position on this team. My only worry is whether our key players come back from World Cup in one piece.

Negativity after beating Chelsea at home for third year in a row. Life is to be enjoyed not worrying what may or may not happen. Try living in the moment.

Hi Scott, Arsenal won vs Chelsea April this year (2022) when Nketiah scored a brace and Saka finished off with a penalty. Interesting stats nonetheless. What I noticed about our defending is just how much we are defending from the front. The whole structure of the team off the ball were just superb for the whole 90 mins.

3. The number of goals scored in the Liverpool – Spuds game

2. The number of goals Liverpool scored against Spuds 1 which wasn’t enough, not even with Kane applying his best diving techniques, for a Spud win.

1. The number of goals we had against the Oligarch’s Delight FC who managed only 0 which means we whooped them in their gaff.

8. The number of points we sit above Spuds as they continue their slide down the table as we retain our first place!

I could mention the Villa – Manure game but they’re shit (Manure that is) and hopeless so who cares? Well not me!

They hadn’t lost since April *this* year surely?

According to the xG chart, Arsenal’s goal was about 0.8 xG. But what had happened if Gabriel hadn’t got that touch before the ball crossed the goal line?
Would Arsenal’s xG have been significantly lower, as the xG for that chance would have been computed from the corner kick position rather than half a meter from the goal line?

Yeah that’s exactly what would have happened

Thanks for the positive stats on Saka. Too many fans don’t recognise his impact and preferred Nelson.

I’ll echo that. Saka misplaced a few passes and I was thinking he had a so-so game. But I wasn’t seeing the defensive work he did or the times he was an outlet for us. He’s a fantastic all-around player and seems to be a great guy too. Surely he can’t be enticed away from the Arsenal now that major trophies are a realistic possibility–right?

Not prefer Nelson, but I do love his skills. More drive and confidence will do him a lot good. Wish he makes it at Arsenal.

Question on the progressive passes yeardage. You show Saliba with 4 and 360 yards. That would mean the average pass was 90 yards. The chart does not seem to bear that out. So does that yardage also include yards the pass recipient take by carrying the ball?

It’s total and not just for the progressive passes.

I almost made a comment about Auba. But I realised that he is no longer our player and I liked it when they kept him in and technically were playing with 10 men 😂

Wait a sec. Willy’s offensive contribution statistically was greater than Auba’s? The irony is delicious.

Just a quick question scott:
66% field tilt means we had 66% of all the games touches in the opposition box?

In the final third

Oh but guys, we haven’t beaten any big teams 😉

Just a quick thanks Scott, I don’t usually comment on your columns but I always read and appreciate the effort you put in. Dominant display today, not only Auba but we made all their forwards look completely ineffective.

Thought this was Saka’s worst game all season. If he’d been on it I think we’d have been 2 or 3 up at half time. Looking forward to Smith Rowe coming back after the WC but still think we need another quality forward who can play RW or CF if we want to go on and win the league.

Arsenal have so many young and talented players. Just wondering if we play the football manager game, how many of the arsenal players is classified as “wonderkid”?

Gréât job Scott. I was hoping to see Partey in the stats. I thought he was immense and eye test tells me he leads a good number of the stats.

This season, we lost against United without him, I reckon we would have won with him.

He is crucial to our success, hope he stays fit the whole season.

For me. 2.3 pts per game is championship level across the first 30 game. You’re then in an 8 game shoot out.
Encouraging thing is, we only need 12pts from the next 7 games to maintain that level.