Arsenal boss Jonas Eidevall says that the decision for Nikita Parris to join Manchester United this summer was largely driven by the player and her desire for greater playing time ahead of Parris’ reunion with Arsenal as Manchester United travel to Emirates Stadium on Saturday evening.

Parris joined the Gunners in the summer of 2021, before Eidevall was appointed and found starts hard to come by, with Beth Mead firmly preferred ahead of her on the right flank. Eidevall says that he and Parris had a conversation at the end of last summer and he granted her wish to leave in pursuit of more playing time.

“It was a very straightforward conversation,” Jonas told Arseblog News. “Keets, as a person, was brilliant to have in and around the team. She is honest, she is straightforward, she is hard-working and she really puts the team first.

“She is one of those players who you wish every bit of success to. It just turns out in her situation that I chose to play with other players ahead of her but I still value her very much as a person and a player.

“When her wish was then to go to play in another environment which would allow her to get more playing time, we didn’t want to stop her. She gave everything to us when she was here and if that was her wish, I respected that.” 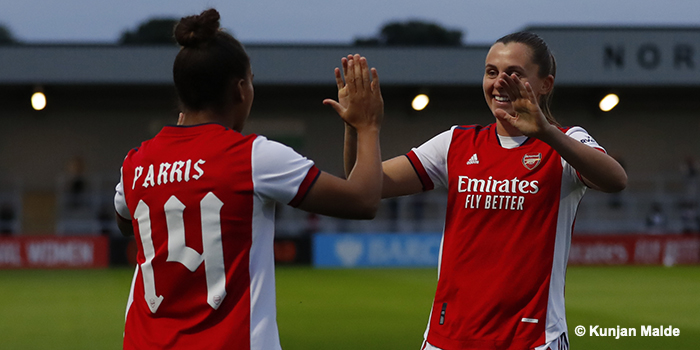 In two home games against United last season, in the WSL and the Conti Cup, the Gunners conceded Alessia Russo headers from setplays. United remain very strong on corners and free-kicks with the delivery of Katie Zelem and the likes of Le Tissier, Blundell and Russo attacking them.

Arseblog News asked Eidevall how he balances preparing for this threat without creating anxiety with the players every time they concede a corner or free-kick.

“Then I don’t think it creates anxiety, then you are focused on what you are doing. It becomes scary for your players when you talk about situations where the opponent is strong but you don’t provide a solution. Then it becomes stressful.

“We know United are very strong on setpieces and they are a very good crossing team as well. For us, it is about focusing on how our organisation when we defend them, what we do, how we defend crosses when they come in and how we stop crosses from happening.”