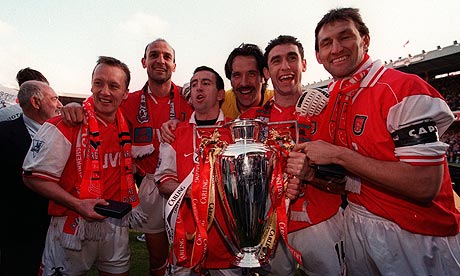 Former Arsenal skipper Tony Adams has revealed he would love to return to the Gunners one day but only as a manager, rather than a Number 2 or coach.

Adams enjoyed 22 successful years at the Gunners winning four league titles, three FA Cups, and the Cup Winners Cup, establishing himself in the Arsenal history books as one of the club’s greatest ever players and captains.

The Gunners legend is currently managing in Azerbajan at FC Gabala, following unsuccessful managerial spells in charge at Portsmouth and Wycombe Wanderers.

While rumours are rife with whether Arsene Wenger will strengthen his backroom staff this summer, Adams has ruled out the possibility of returning under his former manager and mentor.

“I would love to go back to Arsenal one day, but not as No 2 or a defensive coach.

“Arsene Wenger would not let me do enough. He does all the coaching, so I don’t think I could work under him. It’s a tougher job at Gabala than at Arsenal.” Adams told the Daily Express.

The former member of the famous Gunners backline also gave an insight into the the strenghts of former manager George Graham compared with that of the Frenchman.

“It’s his strength. Coaches have strengths and weaknesses.

“And he is a lovely man, he has the respect of most of the players he has worked with.”

Wow Tough words against AW especially after he stood by him. TA is not a good enough manager for arsenal anyway.

What is he basing this on? Perhaps AW just dismissed TA’s suggestions when they worked together because they were crap.

Aint it worrying even the ttrusted ex arsenal players are now doubting Wenger…………… Because i am to im getting extremely worried with lack of business in transfer window apart from signing a charlton shitter who was on loan at eastbourne last year well that made my day when i saw this!!!

Adams has carped about Wenger for some time now. None of this is new. He was a great player for us but his petulant outbursts and his belief that he will ever be good enough to manage a top team is very sad.

Perhaps he should stick to hi poetry slot on The Arseblog.

Adams could be a great no. 2 for arsenal, his passion and determination for arsenal to get back to winning ways should be an inspiration for our current crop of players.

As for taking over as manager, hmmm not so sure his record on that front is good enough. Maybe we should weight and see how bergkamps coaching comes along at Ajax and forge a dream team of former greats to take over from AW

TA might never be good enough to manage Arsenal, but he’s worked extensively for GG and AW and understands football more than most of the pundits and fans out there, so for me his comments are valid. As a player Tony Adams was a 100% winner and Arsenal legend, so to dismiss his comments as rubbish or sour grapes just isn’t right. oo oo Tony Adams! Merson on the other hand…. wtf is that waxing the dolphin and yellow injections thing about? weird. Come on Merse lay off mate. Don’t become like Ian Wright and chat complete shit for media… Read more »

I think this guy doesn’t know that one of the most frustrating and difficult thing to do is to manage Arsenal, it only takes a genius in AW to do it.

Wenger versus Stroller? Come on Tony. Legendary player and captain you will always be but this is a no brainer! I get the impression that someone is still smarting from a perceived snub.

As I’ve jokingly said before, get Georgey G back to manage our defence and keeper, let AW do the rest, bobs your uncle

Well TA is right on the issue of defence and GG though he is only stating the obvious. On the other hand AW had the Invincibles of Cambell, Toure, Cole and Lauren. So yes AW has problems at the back now but does that mean he’s entirely defensively inept?

Tony has not shown himself to be good enough to manage or even be assistant manager at Arsenal, a legend as a player still has a lot to learn as a manager.

Tony, you must know no one is going to manage Arsenal whose CV can be summed up thusly:

“The Gunners legend is currently managing in Azerbajan at FC Gabala, following unsuccessful managerial spells in charge at Portsmouth and Wycombe Wanderers.”

If that truly is an ambition you hold dear, better get to work.

Keep this dreadful manager away from Arsenal.

Respect to a legend, but still. He is no manager.