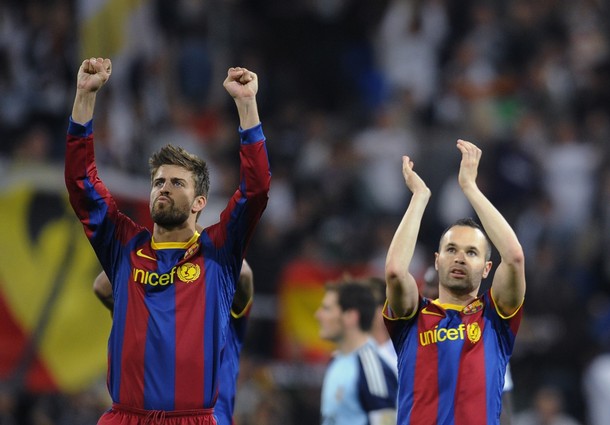 It will come as little surprise to Arsenal fans that Barcelona’s Gerard Pique has once again spoken publically about his desire to play alongside Cesc Fabregas at the Nou Camp.

The Spanish centre-back, who grew up with the talismanic midfielder at La Masia, has long been a public advocate of a raid on the Emirates often providing sound bites for hungry media men in his homeland.

The former Manchester United man’s latest quotes come hot off the heels of a recent picture, posted on Twitter ahead of the Champions League final, in which he and teammate Gerard Pique were seen snatching a picture of Fabregas from the wall of the Arsenal training ground.

Quoted by The Sun, the 24-year-old made clear that his desire to see his friend wearing the famous shirt of the Catalan giants remained strong: “I would like him to. It’s my wish for that to happen. I can’t be clearer.

“He is a Barcelona fan and has been his whole life and he would love to come. It would be very, very good for us.

“Last year it looked like he would come but he didn’t. Now it looks like he could again but we have to wait. I hope the people in the offices can work well and can bring him in this time.

“I have said before and I still do that my hope is that one day he will play for Barcelona.

“I would love to have him alongside me because as well as a good person, he is a great player.

“I would love him to be here this year or if not then next year. He would give us more.

“I haven’t spoken to him recently. I don’t know how Arsenal are set up economically but I do know that he is a great player and a real friend of mine and he is a Barcelona player – he has been in the youth system here and he knows what we are about. He could perform perfectly here.”

Citing the Arsenal man’s struggle to secure a regular first team place in the Spanish national set-up, many football analysts have suggested that Fabregas could potentially find himself regularly playing back-up to the like of Xavi Hernandez and Andres Iniesta if he were to return to his childhood club.

Dismissing such worries, Iniesta himself told Spanish radio station ONA FM, that if the Gunner were signed it could only make Pep Guardiola’s squad stronger.

“(The signing of Cesc) is a matter of Arsenal and Barcelona, ​​we cannot do anything,” he made clear this week.

“Xavi, Cesc and I are not incompatible. If he comes, the team level will be better.”

Despite the calls from their first team squad to make Fabregas the number one target for a second successive summer, Barcelona’s hierarchy announced this week that their total transfer budget would not exceed £45 million; a figure which looks unlikely to cover the cost of persuading Arsenal to sell and rules out funds for pursuing other targets.

Having warded off two bids for former Barcelona president Joan Laporta last summer, Arsene Wenger again reiterated his stubborn stance to keep hold of his captain in May, despite rumours of a potential exodus which could see several established stars quit the Emirates.

If barca want him then put an offer on the table, but nothing under 50 million should be accepted.

Sell him to Real Madrid for £55M. That’ll be a lesson to all those Barca pricks and to Cesc himself for agitating for a move.

This disgusting campaign of Pique and Xavi’s should be investigated by the FA and FIFA. Complete lack of decency and respect.

Perhaps if Pique wants to play with Cesc so much we should make an offer for him, along with all our squad doing interviews saying about how much Pique has expressed his desire to play alongside our captain.

How popular are our players, Pique and Iniesta flirting with Casc, Vidic and Ferdinant with Nasri….

Can’t wait to get the money for Cesc. Great player that he is, it’s only a matter of time and I still bet it is this summer. Any figure from Barca about budgets is an opening gambit.

I’ve had it from a very good source that the incoming replacement for thomas rosicky and denilson this summer is Ever Banega from Valencia. i’m not saying we’ve signed the lad but Valencia have been approached by the players agent after we showed significant interest in him. solid source.

Banega is someone who I saw was available and thought he’d be a decent signing for us. He is quite physical and has a bit of a short fuse which might actually be a good thing for us.

Cesc wont go this year. It’s not up to Cesc, Pique, Xavi or Barcelona where Cesc plays. It’s up to Arsenal and we don’t want to sell him.

The money would be nice. 🙂

I’m sick of these two muppets and Xavi included. How is this not classified as “tapping up” by UEFA? 60m or shut up.

How do Barcelona get away with tapping up our players? How do ManU players get away with it? Doesn’t UEFA have rules again’st this. Financial Fair Play is not the only thing they need to do. This just makes me crazy. If Fabregas did not want to play for Arsenal, why did he sign the contract?