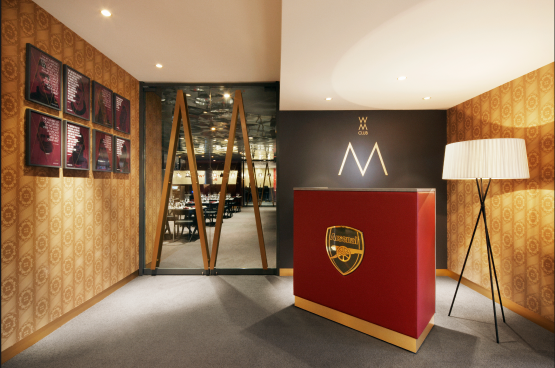 Design consultancy 20|20 has been awarded the Project of the Year prize at the 2011 Stadium Business Awards for its work transforming the Club Level interiors at Arsenal’s Emirates Stadium.

The London based agency, which is also responsible for the current Arsenal crest, the Armoury club shop, the stadium’s external wrap-around graphics and the interior of the Diamond Club, beat off stiff competition from projects across the globe including The Boot Room Sports Café at Anfield, Liverpool FC, the new conferencing and hotel facilities at Coventry City’s Ricoh Arena and the Eden Park Redevelopment in New Zealand.

Club Level caters to 7,000 supporters at the 60,000 North London venue and was revamped last summer as part of the ‘Arsenalisation’ project which the club’s board instigated with a view to turning the Emirates into a more fan-friendly arena.

Much of the inspiration for the designs created by 20|20 for the Club Level areas were based on a celebration of the club’s past and present successes with Arsenal’s two most successful  managers, Herbert Chapman and Arsene Wenger, featuring heavily.

The WM Club restaurant, The Foundry buffet-dining area and The Legends Bar have all been added to the original 2006 plans incorporating plush leather seating, contemporary lighting, sleek furniture and rich timber panelling throughout.

Paying lip service to the attention to detail and quality of the designs, the judging panel granted the top prize to the Arsenal entry, “for not resting on previous success and taking a new stadium to even greater success… for transforming an under-performing space and creating ‘club within club’ spaces to create unique, intimate experiences which appeal to increasingly diverse customer segments… for creating an environment that immerses fans in the beauty and detail of Arsenal’s rich history.”

News of the win in Barcelona comes just a week after 20|20 was also handed a Gold Award by the Association of Interior Specialists (AIS) for the same project.

So we won a trophy?

Technically, design agency 20|20 won the trophy. The plastic surgeon takes the credit for his surgery…not the poor lass being operated on.

Yippee!! This was the one we wanted. This will wipe the smug look of the ‘ six years without a trophy’ brigade.

And how does this help the true ‘common’ that parts with a good amount of his annual earrings to get a seat deep in the north bank freezing his bollocks off to catch a glimpse of glory? How?

Sengupta: If you had paid better attention at school maybe you would be earning enough money to enjoy the classier areas of The Emirates Stadium.

maybe someone as “educated” as you think you are should spend his money on the poor and the needy instead of being a “mug middle class muppet” who increases the profits of arsenal’s greedy shareholders by wasting money buying the disgusting club level ticket. if i had my way i would rip out that mug level and turn it into a standing area and allow back in all the local poor people from n5 and n4 who are the real arsenal fans and have been priced out to allow you fools with too much money in. then maybe we would… Read more »

Why mock tourist? They are Arsenal fans too.

Woh, this comment section got all serious for no fucking reason.

My arsehole smells like shit, I can’t afford toilet paper or arsenal tickets – weep for me brothers… weep… :'(

Nilo, I think you’re taking Tim’s comment a bit too seriously mate. But the sad reality is we can’t afford to pay People like Cesc £130k a week without attracting the wealthier fan. That’s modern day football I’m afraid. If you don’t want that you accept that you become an Aston villa type club. It’s like Roy Keane bitching about the ‘Prawn Sandwich Brigade’ while negotiating a £40k a week contract, which at the time was silly money. Also, no need to insult the entire middle class, I would say I’m probably middle class, I’ve been going to Arsenal for… Read more »

Perhaps we should flood the agency with mail demanding that they propose a change of the crest to something more digestible.