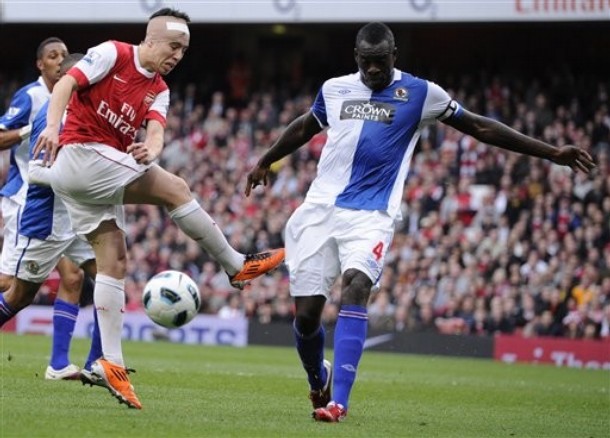 Blackburn Rovers defender Christopher Samba has reiterated his desire to leave Ewood Park if a suitable offer is forthcoming this summer.

The Parisian-born centre-back has been strongly linked with a move to Arsenal in recent months and despite signing a new five year contract at the start of the year following talks with Steve Kean, still harbours desires of playing at a higher level having proved himself a consistent performer in the Premier League

Speaking to L’Equipe, the 27-year-old remained coy on a specific link with the Gunners but did confirm: “I know there are discussions with some clubs.

“For four-and-a-half years I have been at Blackburn and fought against relegation.

“If a good opportunity presents itself, I want to take it. I hope the club will understand if I want to make the step up and not prevent a deal.”

Yesterday Rovers boss Kean made clear that he was under no pressure to sell Samba having already offloaded 19-year-old Phil Jones to Manchester United for £16 million and with the club’s new owner eager to see the club push up the table.

“We don’t have to sell him [Samba]. He signed a five-year contract in the last window. He’s one of the players we would like keep.

“We’re going to try and hold on to all our good players.”

I KNEW IT! There just had to be some connection to France or else why would AW be interested? Now I just need confirmation Wilshire went on a school trip to France at some point…

Aw diddums, how about we say Samba is actually from Blackburn and grew up there. There, there, better now?

Martin, for the scholar perhaps but really on a forum I don’t think my post lost any of it’s point. Your reply did however make you look like a petty minded twat *kiss*

Have the club (Blackburn) said he’s not for sale? If so and if Arsenal are claiming interest we are airing distinctly Barca-esc in unsettling the player. I suspect we haveade a valid approach and they are considering their options, despite what the manager says.

I’m not convinced tho, seems to me he had a couple of great games at the end of the season and now he’s the best thing since sliced Bale.

We’re not claiming interest. Not a single person from the club has come out and publicly claimed that we’re interested in Samba. It’s absolutely nothing like what Farça are trying on with Cesc.

I agree with you about him not being the best option though – I hope we’re not in for him, except as maybe a backup (an expensive one at that!). I really think Vertongen could be ideal, having watched a lot of the Eredivisie this year. I don’t even know if we’re in for him or not though. Might just be media stirring/me dreaming!

If we sign Chris and sell Clichy, what is the starting lineup?
Defos: Vermaelen (CB) & Sagna (RB)

What happens to Kos & Djourou? Will Wenger play this formation:

Is Kos left or right footed?

He’s right footed. If we sell Clichy, I think we’ll most definitely be in for another LB, as I don’t really think Arsene sees Vermaelen as the man for the job. And I agree completely. On a separate note, has anyone ever thought of what Koscielny would be like at CDM when Song is away/unfit/out of form? We all know that he’s a monster tackler who barely ever loses out. At DM he’d have less challenges in the air, and any lapses in concentration would be potentially *less* harmful… and on the ground tackling is his forte! He’s potentially more… Read more »

That actually makes alot of sense. Kos also makes good runs down the middle at times. I’d rather have Vermaelen stay at cb, but if we don’t get a proper replacement he could do the job. With maybe Samba(or whoever Wenger gets) joining Djourou at CB.Gibbs can replace Verm for the games where he has to go to cb. I know Djourou had a bad string of performances in the last game, but he probably our best cb last season. Besides, I doubt Wenger is gonna get more than one cb.

That is why I want Sahko. He is tall and very athletic. Can play left back or centerback. We go with Gibbs and Traore. Traore as the 3rd or 4th options. Vermaelen can also play leftback. That way we have options. We play a speed team, we play Gibbs or Traore. We play Stoke and we go with Djourou and Sahko inside with Vermaelen at left back. If there are injuries, Sahko can slide over and we go with Kos and Djourou inside. Lots of options there and we get the youngest Captain in the history of PSG. Please break… Read more »

Another trophyless season is coming, no decent signings, we’ve been there before. Why to renew ST and memberships if our money isn’t invested?

The transfer window isn’t even open and people are bemoaning the lack of signings, Jeez the modern football ‘fan’ is a spoiled brat. Let’s say wenger goes then, first off who replaces him, secondly how much of a transfer kitty will he want, more than the £45mil we have, which includes the first years salary of any new signings. Arsene could have done better but when he goes people will realise what a good job he’s done just keeping us up there.

Utd have nearly finished their transfer business with two of the games best rated youngsters for 30m, and we’re still d1cking about with Samba! Where is the ambition? At least Cahill has shown a bit of international promise.
Arsene is a must-have but when Clichy and Cesc are waving goodbye do we really want to see Gervinho, Samba or Joey Barton(!!) sign up?

@Rads – Do you reckon Cahill is better than Samba? I reckon Samba’s figure alone would be a massive asset in our back line and I would rate him on par with Cahill roughly in other categories. Also woudl come at 10-12m as opposed to 16-18m

It does make me grin.

We moan about others going about their business in public – whether it’s Sandra in Spain or Twitchy down the road, who clearly has previous on it (he’s a smashing – twitch – player, but he’s under – twitch – contract – so we can’t do – twitch – nuffink – twitch – about him, but I’d love – twich – to have him – twitch) – and then when we DON’T do our business in public we, well, moan.

Nik – yeah you could have a point! Kos would make a great cdm. I hope he makes it into the team somewhere I think he had a great 1st season for us.

If the transfer window isn’t open how are all these deals being done by other clubs?

The transfer window for English clubs dealing with each other opened on the last day of the season, the window for dealing with overseas clubs opens on July 1st, all deals done by Real Madrid etc. are pre-agreements until the 1st of July.

If you wanted to be in a position to move and knew Arsenal were interested in January, why sign an extension without a release clause? He needs to sack his agent…

If Arsene wants flexibility he needs to add a classy DM, someone better and more mature than Song. I would love to see Inler and even better – Schweinsteger in this role. Then Arsene could even try Song as CD, just as he intended some time ago, or keep him as a competition for a new DM.

Atlast some1 thought as i did.koscielny would be the defensive midfield player we’ve been expecting…i also think we have gd defenders but we lack depth.To win pl we need,many defenders,any in that case who can work hard..some1 to replace denilson..and gervino to asist Theo and we are good to go

I’m quite frustrated honestly. United have signed Young, Jones, and De Gea. Already. Bang, they identified areas to strengthen and targets to go after and then they signed them. Why can they do that while all we can do is faff about? They’re definitely not much richer than us in terms of available cash.. Honestly at least a new manager would demand funds and would use them

Why do we need Samba?! We’ve got Vermaelen coming back, Koscielny and Sqillachi in their first seasons – they will definitely be given another chance – Song, who can play CB if required, Miqel coming through, and Djourou, a mainstay. People keep saying we need a tall Defender, but look at the stats: Koscielny – 6 ft 1 in Squllachi – 6 ft 1 in Vermaelen – 5 ft 10 in (but makes up for it in skill) Alex Song – 6 ft 0 in Miquel – 6 ft 4 in Djourou 6 ft 4 in And with Sagna, Jenkinson,… Read more »

I agree about the LB, if enrique is available he would be nice but otherwise fuck it. I do think we should sign one attacker

:O I could have sworn he was 5’9 or so… well then we’re sure to win the title next year

[…] Christopher Samba says he wants to leave Blackburn, with Arsenal rumoured to be interested. He said: I know there are discussions with some clubs. For […]

I can’t see anything happening with Samba. Too much noise. A more typically Wenger deal would be Carlos Cuellar from Villa. Rangers were turned down at 1.5m but even if you double that, it’d still seem a good deal for a CB with PL experience.

Andy carroll’s not gonna outjump both our CBs and our keeper at the same time if one of those lot is Samba.. just saying

Personally, in would like to see Eboue given a chance at CB. Well, he’s gotta be better than Sqillachi. And Vela as CDM – come on, give the boy a chance!