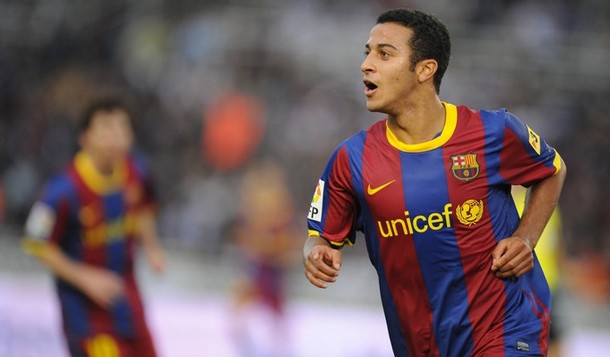 The father of Barcelona midfield starlet Thiago Alcantara has dismissed suggestions that his son could be about to move to Arsenal as part of a deal taking Cesc Fabregas back to the Nou Camp.

Reports in both the Spanish and British media at the weekend hinted that Arsenal had been approached by representatives from the newly crowned European champions with a view to thrashing out a £50 million package for Gunners captain Fabregas which would include Alcantara as a make-weight.

Another graduate of the Catalan side’s La Masia Academy, the 20-year-old has been tipped for a bright future at the top of the game with Pep Guardiola rewarding the youngster with a position on the substitute bench for the Champions League final victory against Manchester United.

Despite being groomed for a regular first team role with La Blaugrana it has been suggested that the Spanish under-21 international is frustrated with the competition he faces from the likes of Xavi Hernandez, Andres Iniesta, Javier Mascherano and Sergio Busquets and could eye a move elsewhere to garner more first team experience.

“We have seen the news in the papers, but I believe that Thiago enters in the plans of Guardiola for next season.

“My son stays at Barcelona. They have a contract and we have decided it’s continuity.

“Thiago is developing and needs to evolve. This season was important, but next season could be better.”

The last thing we need is another Barcelona youth that can’t get a game for the first team, who will be only too eager to go back once he’s got a few games under his belt.