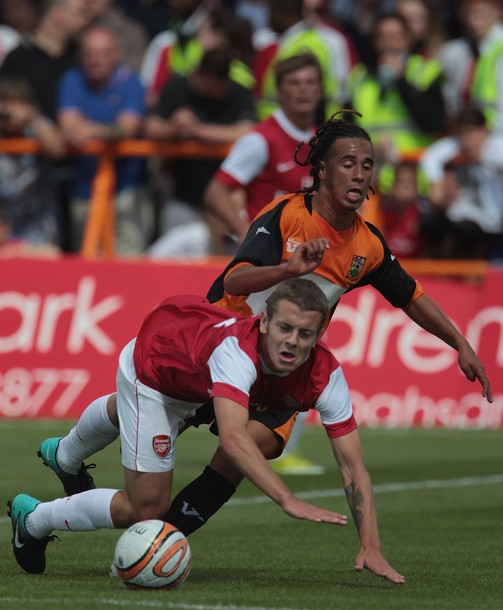 League Two side Barnet have confirmed that they will not face Arsenal in the pair’s annual friendly match at Underhill.

Arsene Wenger’s side have regularly taken on their North London neighbours in a summertime showpiece friendly match as part of a deal which saw the Gunners afforded use of the minnow’s facilities for reserve and youth team matches.

Last season Arsenal’s reserve team increasingly played their matches at the club’s London Colney training ground and it appears that as a consequence the need to play a compensatory friendly match has been negated.

A statement on Barnet’s official website relayed the disappointing news about the cancelled fixture before revealing that Tony Adam’s Azerbaijani side Gabala have been lined up as an exotic replacement.

“The long running money-spinning pre-season friendly against Arsene Wenger’s talented Arsenal will not be staged this July, the club revealed today.

“The sell-out game against the Gunners was staged in recent years as a prelude to the season in return for the Premiership side playing all their reserve games at Underhill. The rules have now changed and they now only play appoximately four reserve games at the ground.

“In addition, former Arsenal and England centre half Tony Adams will be at Underhill on Wednesday, July 20, as head coach with his Gabala team from the Azerbajan Premier League.”

Arsenal have so far announced matches against a Malaysia XI, Hangzhou Greentown and FC Cologne before the end of July Emirates Cup matches with Boca Juniors and New York Red Bulls.

I think this is a real shame. The Arsenal/Barnet friendly was always a great day out and a very good money spinner for Barnet.

I think the cancellation of the friendly is more to do with our tour of the far east than the rules changing for reserve games. It is one more move away from club traditions and supporters in view of making more money for Arsenal.

Shame, agree with drew – the football world I used to know and love watching the Arsenal in the 60’s and 70’s is dead and gone. Instead of a good laugh, few bevvies and a look at the youth we’ll probably be sat in front of the laptop watching some godforsaken stream with a chinese commentator.