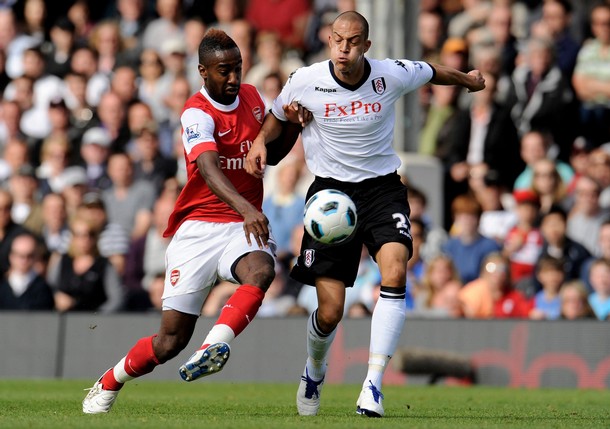 Arsenal defender Johan Djourou has revealed that he is content with the form he has showed over the last nine months, but stressed that the Gunners must improve if they are to win silverware.

The Swiss international featured only once in the 2009/10 season after a cruciate knee ligament injury sidelined him for nearly a year, but grew last term to be an integral part of Arsene Wenger’s defence in the absence of injured Thomas Vermaelen.

Forming a solid partnership with Frenchman Laurent Koscielny, Djourou helped the Gunners to a four pronged assault on domestic and European honours before the Gunners collapsed in the final months to prolong their trophy drought.

Speaking in the aftermath of Switzerland’s 2-2 draw with England at Wembley yesterday, Djourou reflected on a tough end to the season at the Emirates:

“For the team, it was difficult because we were playing for so many trophies at the same time and we were so close to getting one.

“Last season, I didn’t play a game and to play so many games and have a good season, I was happy.

“Obviously, now we want to do better as a team and as individuals to get something. I think that the fans deserve and the manager deserves something. We need to get better, get stronger, and really prepare well for next season.”

The Gunners have been strongly tipped to strengthen their squad in the close season with several big names thought to be on Arsene Wenger’s shopping list. Considering the potential impact of an influx of new faces in North London, the Swiss continued:

“I don’t know – that’s for the manager to answer,” he said, when asked about the summer plans.

“I think competition is always good. That pushes you in your position. When you want to make a team better, you have to have a good squad.

“I think that we had a good squad but if players with experience or different players can bring quality, they’re welcome.”