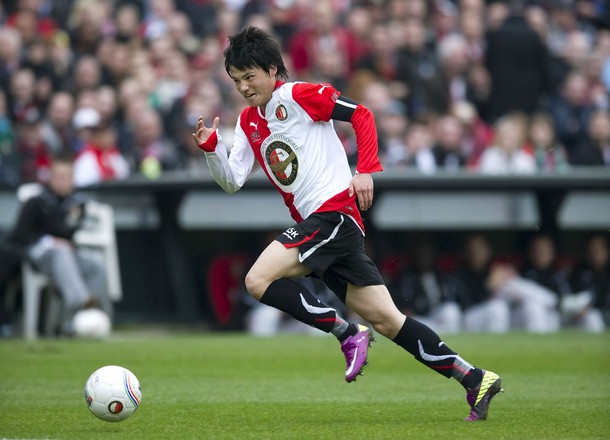 Dutch side Feyenoord have confirmed that they are analysing the possibility of taking Ryo Miyaichi on a second loan spell from Arsenal but stressed that with young players of their own needing first team minutes a deal for the Japanese winger is still some way from being confirmed.

The 18-year-old, who signed for the Gunners from Chūkyōdai Chūykō High School, failed with a British work permit application in January and immediately travelled to Rotterdam for the second half of last season where he impressed from the outset on the wing.

“Ryo has definitely been of great value to us. The lad has done very well with us, but we also have to look at our own players.

“In Sekou Cisse and Jerson Cabral we have two players able to work just as well as Ryo in the same position. We cannot turn a blind eye to that.

“Therefore we will go through everything and then make a considered decision whether it is wise to bring in Ryo.”

Tipped for a bright future at the Emirates Arsenal are thought to be willing to apply again for a work permit for Miyaichi ahead of next season. In May Arsene Wenger revealed his hope that the winger would be called up for Japan’s Under-23 squad aiming to qualify for the 2012 Olympics; a scenario which would aid his chances of playing in the Premier League.

“That is a good help,” said Wenger. “An even better help is putting him straight in the [Japanese] first team, then we do not need a work permit any more.

“He looks a very promising boy and everybody who went to watch him has been hugely impressed by him. He is a character and a great football player.”

It appears that whether Miyaichi moves on loan or not he will still be included in Arsenal’s pre-season preparations which include a tour of Malaysia and China.

“He will be with us in pre-season,” confirmed Wenger. “I think he is good enough but if he is ready enough to have a place in our team, we will ask for a work permit and try to get him in.

“What I like about Ryo is that he has good timing with his runs and understands when to go and where to go. That is something very important. He knows how to use his pace and he is an intelligent player.

“He is a boy who went straight from school football to professional football and straight away was the best player in Feyenoord.”

“straight away was the best player in Feyenoord” – arrogance, love it.

Who decides if he is a ‘special talent’? Surely the best people to make that judgement are football clubs, especially EPL clubs. Clubs spend huge amounts of money on players for some binsy 5head to decide, actually – he ain’t that special. Why if said pen pushing screen licker is a spurs fan?

I do not claim to know the criteria, but the general idea of immigration limits I think is that foreign players must be better than run of the mill UK players. So he has to be _better_ than readily available UK players. However, clubs consider also may sign a foreign player simply because they could get him for less from the selling club or he would play for less in wages. The reason the “pen pushing screen lickers” can’t abide solely by the judgement of clubs as to a player’s skill is because clubs care very much factor in the… Read more »

in the second-to-last sentence:
– care very much

I agree, who are they to say he’s not a special talent?The immigration quota is stupid anyway, what percentage of UK immigration happens as a result of cost-cutting prem teams? .00000000000000000001?

Welcome to the jungle… of wordpress. | savagegooner

[…] Onto interesting news then, the last six months have been nothing short of magical for young Japanese winger Ryo Miyaichi, having gone from high-school footballer to a leading light as one of Arsene Wenger ‘Young Guns’. He has impressed fans and pundits alike during his season long spell in the Eredivisie with Feyenoord and has attracted attention from clubs all across Europe with “two Bundesliga clubs and a Belgian side [most probably Anderlecht]” looking at him. He looks unlikely to win a work permit this summer and I’m sure that there will be no end of clubs ready to… Read more »