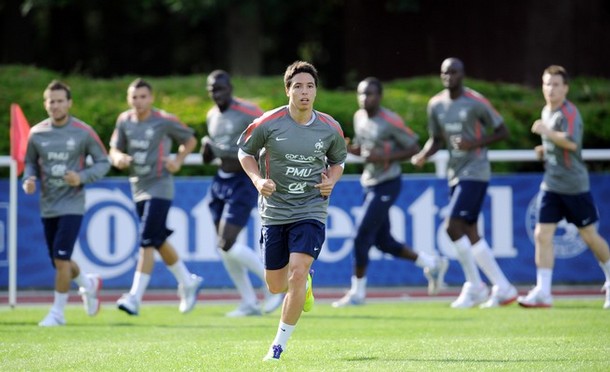 The agent of Arsenal playmaker Samir Nasri has clarified the situation regarding the Frenchman’s future insisting that the 23-year-old is set for continued talks with Arsene Wenger and the Gunners hierarchy.

Talks regarding the renewal of Nasri’s contract had broken down due to the French international’s wage demands with the midfielder being linked with a move away from the Emirates with rivals Manchester United reportedly interested. The Daily Express revealed this morning that the Frenchman was set for a “showdown” with Wenger regarding his contract situation.

Despite continued exit reports the agent of Nasri has moved to distance his client from reports linking the former Marseille star with a move away from North London.

“I want to clarify that there has been no break with the Gunners over the contract’s renewal and we should meet again soon with Arsene Wenger. ” Alain Migliaccio told calciomercatoweb.

“There are a few clubs interested in Samir, but it is useless to name them.

“Before listening to other teams, we need and we want to talk with Arsenal.”

Look at Cesc’s comments today: so much more class than Nasri.

Why? Because Nasri has been honest the entire time saying he doesn’t know, and Cesc is sitting here telling the public he’s fine even though he’s pushing for a move away? Nasri is not indebted to Arsenal. He chose to come here, because he had ambition, and he still does, so let’s just hope sees a good future here.

On the other hand, this is first implication that Nasri actually wants to play for Arsenal, and will negotiate to make it happen.

He wants to play for Arsenal as long as we pay him what he thinks he’s worth. I hope he stays but we can’t dish out silly money based on a decent half season. I think he only managed 4 assists in all competitions which isn’t comparable to Cesc over last few seasons. I think it dangerously close to becoming another Adebayor situation and the supporters are tired of seeing players try and squeeze every penny out of the club but not achieving anything but personal wealth.

Comparing Nasri’s production to Cesc isn’t particularly enlightening because for most of the season they played different positions, and Wenger deploys them differently in the First XI.

Compare Nasri to others who played in his stead or on the opposite flank in the top 3 of the attack. Those players would be Arshavin, Walcott, et al. Without checking, I reckon Nasri outperformed those other guys by miles.

I think arshavins assists are actually far greater than Nasri’s too, and he’s been pretty average. Sorry it isn’t enlightening to compare productivity of two creative players, my humble apologies. Next time I will only use 5’8″ tall 23yr old French players of African decent when trying to make a general point. Apologies again.

Don’t get your panties in a twist. Nasri plays on the wing and Cesc plays in center of midfield, often creating from deep. Goals and assists aren’t likely to be comparable.

All I was saying is Nasri wants comparable money to Cesc but isnt as productive regardless of position. And as for my panties…….I’m not wearing any.

Oh yes, forgot to mention that his agent is indeed a cnut!

That all hell is let loose and the world is about to collapse on Arsenal FC is because of one arrogant man that will never listen to people. If he had bought players by now I am 100percent sure that Nasri would have signed. Look at Ribery some years ago when Bayern wasnt winning anything, he wanted to leave at all cost. A year after, with Robben and other players bought, the team missing a treble by loosing in Champions League final, the issue became dead and buried. He has since signed a long term contract. No player want to… Read more »

Dude I had to agree with you on the Bendtner miss from a classy pass that Wilshere dished out with like 2 minutes to go….you’re righ…no one wants to give a pass to someone who obviously won’t score, safe to say…let Cesc go, for his heart is not with us…we all know that, and as for Samir; he could stay just switch him to 110,000 after all, Cesc will have been gone right? Make Thomas Vermealen Captain and lets move on.

I think it’s time to say goodbye Sami. Arseblogger was right in the column today saying ‘biggest expense to a club is players wages, that’s what drives up prices for fans’. Pay the best commensurate wages but making Sami the highest paid player at the club is undeserved. If Sami and Cesc go… It’ll have to be a major rebuild. Btw if Craig Gordon is bought, nice and cheap, it’ll be a great bit of business. I know it’s not been resounding success for him down here but in my former life I was a hearts fan. He was playing… Read more »

Some part of goalkeeping is ice-cold confidence, and it seems Gordon’s is a bit shaken. What kind of solution would he be at this stage in his career? If there are legs to this rumor and it goes through, is he installed as No. 1? Gordon is still young for a goalkeeper. What should Fabianski or Sczezny make of that, then?

This whole nasri thing bears a strange resemblance to the Anelka saga of yrs ago,. again it was his agent (his brother) who was doing all the mouthing, whilst the player didn’t help things either. you’d have imagined that a man of le bosses intelligence wouldve learned from the first time,???,.. Strange…

ian fogerty
Reply to  Will

Then Anelka basically f**ked up his career at Madrid and needed bolton to rebuld it and Chelsea to give him a 2nd chance.

Perhaps we should give him what he wants just so he signs a contract, then stick him on the transfer list for £20mil the next day.

If every great player wants to leave Arsenal, does that reflect on the players or Arsenal? Anelka, Viera, Henry, Hleb, Flamini, Fabregas, Clichy, Ashley Cole, Sol Campbell, Pires, Nasri. All of these players have been unhappy at the club and/or their wages. They all forced their way out sooner or later. We are top 5 in revenues in Europe. Why can’t we keep the players?

I don’t know that it says much of anything either way. Club and players win some and lose some. 1. Who knows what Sol was thinking, but he didn’t leave Arsenal for more money. Or trophies. 2. Neither did Pires–he left because he could tell that his career in the First XI was on the wane after his CL final substitution for Almunia following Jens’s red card. 3. Vieira left for years on his conract, iirc, because Wenger wouldn’t offer him a multi-year deal. 4. Henry left in the middle of rebuilding because he had a short number of years… Read more »

Agreed Fam….agreed, i agree with all you said apart from the fact that when most young players leave Arsenal with Cole and Flamini the only exceptions, first team football is at a premium, just ask Hleb who basically begged Wenger to sign him back. One mistake i felt was how Wenger treated Gilberto, he was immense for us and a decent domineering captain, someting cesc isn’t. Look at all that left us Sylvinho, Overmars,Hleb, Vieira etc, they all petered out somewhere and got forgotten.

I see you, Cabaye . MMMmmmm

Nasri: “We were the best team” | Arseblog News – the one stop Arsenal news site

[…] been deemed acceptable to either the player or his agent. However, Nasri’s representative spoke earlier in the week about imminent talks with […]