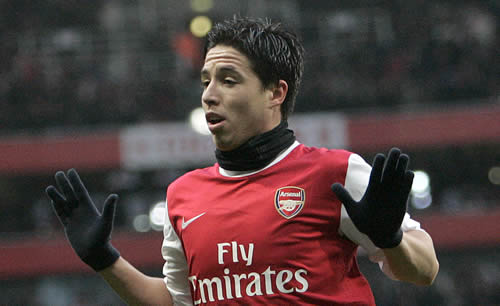 Samir Nasri has cast serious doubt over his Arsenal future by saying he ‘hasn’t really thought about’ extending his contract with the Gunners.

The midfielder has just 12 months left on his current deal and although Arsenal have been trying to tie him down to a new deal for some time, the French international still hasn’t put pen to paper. With the prospect of a Bosman next summer or a cut-price deal in the near future he appears to hold all the aces at this moment in time.

In an invterview with TF1 show ‘Telefoot’, Nasri was asked about a new deal at Arsenal and about rumours that Manchester United are interested in signing him:

Q: Will you extend at Arsenal?

I don’t know, I haven’t really thought  about it. Discussions are taking place. I still have important games with the national team

Q: Were you contacted by Manchester?

You have to ask my agents. I have to see if there is anything concrete/true about it.Then we’ll have to ask the right questions and talk about it with the club after the Poland game with France.

Nasri’s lack of clarity about his future at the Emirates will be a disappointment to many fans who have long supported him despite inconsistent form since he joined the club.

He had his most profilic goalscoring run between August and January, scoring 13 times, but he faded badly towards the end of the season, scoring only twice. Arsene Wenger will be anxious to keep Nasri, especially with the Fabregas situation ongoing, but there’s a strong belief that unless he signs a new deal before the end of June he’ll be transfer listed.

Arsenal are simply unwilling to let him go without recouping some of the £13.5m they paid for him in July 2008.

In what promises to be a very busy summer for the Arsenal manager this is one headache he could do without, and it remains to be seen if the history between Wenger and Nasri’s agent, Jean Pierre Bernés, will play a part in the outcome.

Thanks to Dylan for the info.