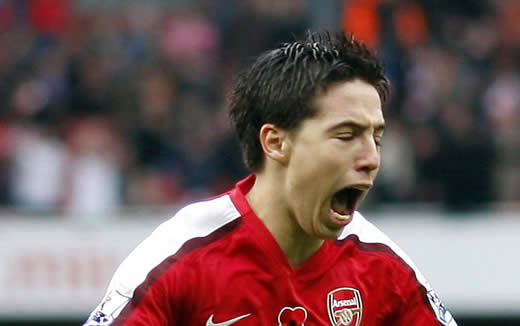 Samir Nasri says Arsenal were the best team last season even though they finished the season 4th and without a trophy for the sixth season.

Speaking to the Arsenal Magazine, Nasri said “We had everything to be champions, but if you look at it, every time we played to go top of the league, we never did. In terms of talent, I feel we had the best squad of the whole league. We played the best football. We were the best team, even if Manchester United had a good season too”.

The Frenchman put Arsenal’s now almost traditional end of season collapse down to making mistakes out of a desire to win but says new additions could bring the good times back.

“As a team, we all realise now what we need to do to win a trophy. We have improved so much. If the boss adds some good players, I really believes a trophy will be won”.

Nasri also spoke about his contract situation but stopped short of making any assurances about his future, saying “There is not much to say apart from don’t listen to all the rumours and everything that is written or said. Earlier in the season I spoke with the boss and we said we would talk during the summer, which is what we are going to do.”

Arseblog News is aware that Nasri has been offered a number of lucrative contract extensions over the last 6 months but none of these have been deemed acceptable to either the player or his agent. However, Nasri’s representative spoke earlier in the week about imminent talks with Arsenal.

With just 12 months left on his contract Nasri could move on a Bosman next summer, a situation the club are not willing to face. A deadline of July 1st has been set – if Nasri fails to agree new terms by then he will be made available for transfer so Arsenal do not lose a valuable asset for free.

Who hold the good information. I do remember Wengersaying that they were focusing on competitions and that that situation would be sorted out in summer. Now we are in summer. Nasri says the same today. So who we need to believe ? Arseblog which make an amazing work but does it basing on what it “heard”. Or those who are clearly involved in the situation. That’s not a rethorical question, it’s a true wondering.

In arseblog we trust

These quotes are from the Arsenal magazines which comes out every month. This is probably quotes from the May addition magazine.

I like nasri as player and hope we keep him. However I think we should save blowing our own trumpets until we have some silverware to decorate the band stand. Otherwise you can look a bit foolish …. The best teams generally end up winning at the end of the day.

[…] Speaking to the Arsenal Magazine this month he said fans should not listen to rumour about his future and confirmed that he’d be talking to the boss in the summer about his situation. However, he made no assurances about a new deal and while he might well want to stay so far he’s turned down all the offers made to him. I also wonder if he might be a bit mad, seeing as he seemed to believe we were the best team last season. […]

unless wenger keep nasiri , another trophyless season will arrive soon.

I should be chief negotiator at Arsenal. Me – do you want to stay or not Sammi and form a dynamic partnership with Joey Barton, and how much more a week do you want? Sammi – Er, £20k more a week then your predecessor in these negotiations were willing to offer. And I want all the blue ones picked our of my smarties. otherwise I do one for nothing next year. Me- done and done. Sammi – (two thumbs up, cheeky grin) there is my signature on a five year contract. Me – Ta muchly. You are with that signature… Read more »

Arseblog … an Arsenal blog | Players start to return, Arsene has work to do

[…] space of a few years, that he’s changed his position from a couple of weeks ago where he said we were the best team to one that’s not good enough for him, and it doesn’t buy the bit about it not being […]