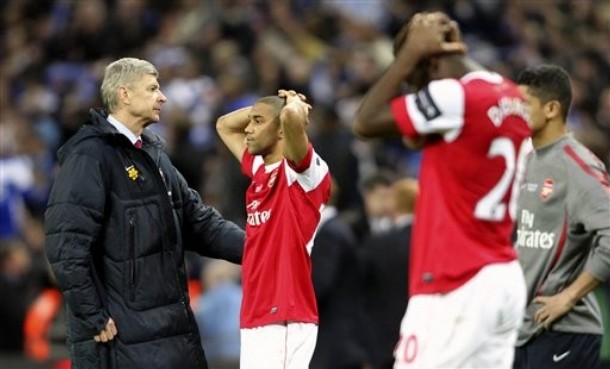 Paris Saint Germain have emerged as a new suitor in the race to sign Gael Clichy, according to Footmercato.net.

The Ligue 1 side, who were recently the subject of high-profile investment by The Qatar Investment Authority, are ready to table a bid in the region €15 million for the French international and will sweeten the deal for the player by offering a huge €3 million a year salary (after tax) in an attempt to ward off interest from the likes of Liverpool and AS Roma.

Clichy is far from being the first high profile target linked with a move to the Parc des Princes. Echoing developments at Chelsea and Manchester City following their respective takeovers , the Parisian outfit have also been tipped to make offers for the likes of Dimitar Berbatov, Samuel Eto’o, Jeremy Menez, Marco Borriello, Javier Pastore, Dimitri Payet, Eden Hazard, Gervinho, Kaka, and Ganso.

It remains to be seen whether PSG lodge a formal bid with the Arsenal board. If they do it is likely to test the resolve of Arsene Wenger who was quoted yesterday claiming contract talks with Clichy were ongoing. The former Cannes player has just twelve months left on his contract at the Emirates.

Meanwhile, L’Equipe report that free agent Robert Pires is  weighing up an offer from Evian TG. The Annecy-based minnows, who were only formed in 2003 following a merger between FC Gaillard and FC Ville-la-Grand, recently earned promotion to Ligue 1 and are looking to add experience to their ranks ahead of the new season. 37-year-old Pires, who has not played in France since quitting Marseille for Arsenal in 2000, was released in May by Aston Villa after six months on the books in the Midlands.

I don’t see the need to keep Clichy, I think he is an average player, decent in patches going forward, but lacking in awareness and defensive ability. He often plays opposition forwards onside and this has cost us at times last season, notably the last moments Sunderland away and almost in the Carling Cup final.

If we get a decent bid for him and replace him with a quality left-back (and the much needed Center back) it may do wonders for our defence.

Well then who is it that we should replace him with?
I mean we as fans spent so much of our time watching, analyzing and dissecting our players that we tend to loose focus. according to some reports based on OPTA stats Clichy might have been the best defender in the league last year.
Sell Clichy, but replace him with whom?

yes it seems like a very good deal esp. if he’s reluctant to sign a new deal but we have nobody to replace him with. Gibbs is not up to it yet and injury prone. Finding a top left-back for a right price will not be easy for sure.

Sell! Sell! Sell!!….Another 15Mill in the transfer kitty would do us some good…if and only if Wenger is out to splash the cash….not holding my breath thou….

That is amazing, which is why our deity wont allow it obviously. Leighton Baines I think we all agree would be great but we wouldnt pay what Everton would want unfortunately. Who else to go for?

I’d love to see Baines in a Arsenal shirt, but obviously it’s not just a matter of just putting money on the table. Everton are notorious for driving a hard bargain, see the Lescott saga and us trying to get Jagielka last year. We can’t just pay 30m for a left-back. Also that would put us in a very weak position in every other transfer, that’s why City aren’t able to buy a player without paying 20m upwards. At least try to show some rationality and understanding how to do buisness, it’s a bit more complicated and difficult than what… Read more »

Would rather he stayed, I like Clichy. 25 now so must surely be ready to cut out the mistakes. Plus i cant see any readily available replacements, can you?

Weedy, judging by your use of the shift key, your form makes you an ideal candidate for Arsenal!

Ha.. ha.. anyway I think the fact that he’s 25 and still cocking it up suggests he’ll never cut the mistakes. I’d like to let him go but only for 8-10m+. If we did that Enrique from Newcastle for 5-7m would be solid and then a CB… that or Baines!

It doesnt work but thats not important.

There is no way this story is true.

Take It. he’s a liability. does contribute going forward and makes defensive mistakes. only god thing about hi is that he is quick but thats it. Get rid.

Why shift a quality centre half to left back? Why not just buy a decent left back, they are cheaper than centre halves anyway.

that’s the le-grove line….go back to your caves i tell you! lol.

but really why would you want our future captian, strong leader, and really f’ing good centre back out on the left? and what makes you think wenger is even thinking along these lines….this is just an aimless ruse, with no grain of fact in it..

er… he’s actually not bad… compared to the rest

I still quite like him as a player but his ability to lose concentration at crucial times and his lack of any final ball in the final third means i won’t be too said to see him go. I can’t believe the figures quoted though.

This isn’t new – they were mentioned a while ago as possible buyers – I thought at the time it would be a good place to shunt Clichy off to.

We don’t want him going somewhere in the Premiership and then getting a second wind.

[…] of suitors appears to be growing on an almost daily basis with Roberto Mancini’s side joining Paris Saint-Germain, Liverpool and AS Roma as a possible […]

Clichy was spotted on the train to Dover this evening. He got off at Ashford International. He could just be off for a couple of days holiday but maybe there is some substance to this.