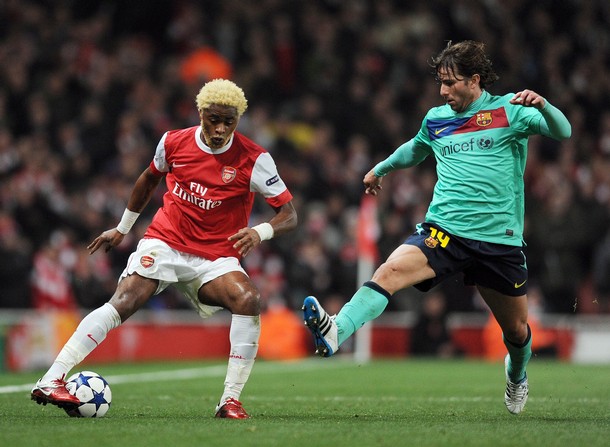 Having been fined US$2,000 for failing to shake the hand of international colleague Samuel Eto’o, it’s safe to say that Alex Song is in a pretty foul mood. So foul in fact that he is now ready to appeal the punishment imposed by the Cameroon Football Federation by taking them to court.

The incident, which took place in a Yaounde hotel ahead of the Indomitable Lions’ African Cup of Nations qualifier against Senegal, has earned big headlines in Cameroon even though his legal team believe that the Arsenal man has not technically infringed any rules.

Despite the fine being replaced by a three day stint coaching youngsters, lawyer Sebastien Song is quoted by Chinese News Agency Xinhua stating:

“The fact that you refuse to shake hands with a team-mate does not constitute a breach of the body’s rules and regulations.

“The incident took place in a private gathering and can’t be blamed on my client (Alex Song). More to that, the coach who was present at the scene did to include the incident in his report to the FA because he felt Alex didn’t break any rules.

“It is a stupefying verdict that we’ll not sit back and accept. It is totally unjust and we’ll use all available means to appeal and overturn it.”

Song is currently gearing up for a return to pre-season training with the Gunners as Arsene Wenger’s side prepare for a tour of the Far East.

great stuff, let’s hope this ones runs and runs and runs, and ends up with song not heading to the ACN in January

Fair fucking play to you Song. You gots my respect in this one fella.

I am genuinely bewildered by this. You’re paid to work with people, not like them. Song’s lack of hypocrisy is a fantastic thing and should be applauded. And yes, if it means he doesn’t go to the ACN then it’s an even better thing…

Can’t blame him. What a stupid egotistical decision from Cameroon. Eto’o is a cunt anyway.

‘eto’o is a cunt anyway’- beautifully put, was that Shakespeare or Oscar Wilde? True though.

Of course, how foolish of me.

Good on you, Song. I do hope that he pisses Cameroon off enough to be excluded from ACN… although I’m sure it’s an honour to play in it.

Gallas and toure didn’t see eye to eye when they played for us, well gallas and most of the first team didn’t get on that well but we didnt fine them because gallas of it.

If your going to get fined for something, make sure it’s worthwhile. Should of chinned the twat – that’d show ‘im!

Song should tell the Cameroon FA to go do one. We can do without him playing in the ACN.

Personally I think he should fight with them until they drop him from the squad altogether. If we can keep him during the ACN, sweet!

We all know he’s doing this to get out of the ridiculous community service penalty, not the 2k fine. In any case as previously stated, ad naseum, itd be great to keep him during ACN and finally, eto’o is a cunt

With all this weird transfer stories flying about, i’ll throw in my hypothetical 2 cents. So this is what will happen. Song and Eto’o will kiss and make up, become the best of mates. Song will persuade Eto’o to join him at the Emirates. Eto’o will combine with Van Persie ( who will play his first full and injury free season) to form the premier league’s deadliest attacking combo, scoring 25+ goals a piece leading us to our first trophy in 6 years. True story.