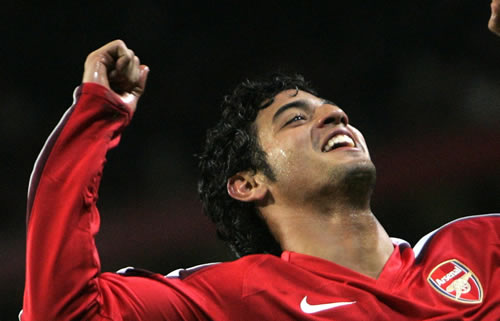 The agent of Carlos Vela says the Mexican forward is not for sale and will continue at Arsenal next season.

Eduardo Hernandez told ESPN Radiofórmula, “I’ve had eight conversations with Arsenal, the most recent was last Friday, and Carlos is an Arsenal player, he’ll stay at Arsenal and is not for sale”.

Hernandez spoke about Vela’s loan spell at West Brom and his progess at Arsenal, saying “The process with Carlos is a little bit slow. Arsene Wenger is an extremely demanding coach, he sent him on loan for 6 months to West Brom not with the results he wanted, but, nevertheless, everything is going very well”.

Vela has been linked with moves to Anderlecht and Turkey this summer and Arsenal fans will be somewhat bemused by his agent’s insistence things are going ‘very well’.

Despite being issued the number 11 jersey last summer, indicating Vela was very much in the first team plans, his season was a big disappointment. A chance on loan at West Brom did little to suggest he was ready to make any kind of impact at Arsenal and these declarations about his future sound very much like posturing ahead of a transfer away from the club.

Vela is a better sub than Bendtner and i’m glad to see that he is staying actually.. he’s a good player and just needs to play, in my oppinion..

I have to say I’d be happy to move him on. Good player when you’ve won a game and fancy a nice goal to finish things off, but not much more than that.

Outside of the Carling Cup has he ever scored a goal that meant anything? Serious question.

Agree with the guy above

Vela is not for sale? A player who is not good enough to regularly get into West Broms squad, let alone team is staying at Arsenal. So all of the talk about a fresh start at Arsenal this summer was predictable bollocks.

If tI feat for the future of AFC.

He’s had plenty of chances. Plus there’s the suggestion he doesn’t work hard enough in training to be given chances, likes a night out rather too often, and has no idea where he passport is.

I’m astounded Arseblog have beaten Carlos Vela News to this story, keep up the good work!

Vela should be looking to move on, he’s been around arsenal for years now and never made it out of the CC side. Not good enough I’m afraid

CVNews stopped bothering after becoming depressed his hero was a nobody.

He’s one of those players that promised so much and delivered so little. I do think he needs to play week in week out but can’t see where he would get that unless he drops down a division.

Possible contingency plan by Wenger? RVP, Gervinho, Walcott, Arshavin, Nasri, Cesc etc has plenty of goals in them. That’s not the major problem that needs to be addressed. We desperatly need to sure up are back four! Please, please can we tie up Cahill and Samba asap.

I think Vela has class but just not the workrate or agressiveness (maybe lacking the power too) to make an impact in our first team. Would be fun to watch him tear up the championship though he should sign for west ham

Vela may not score many important goals for arsenal, but none of you understand how hard it is to pick up form when you don’t play.

Also, even though he scored important goals for WBA, they played a certain formation with one striker. You would obviously choose odemwingie over vela because of form

Everyone understands how hard it is, which is why a player has to work really hard when he does get a chance. Vela never did.

Vela needs to bulk up and build his body in to that of christiano ronaldo. Then he’ll do well in the prem. If not spain would suit him well.

The lad needs a kick up the arse. He could be a great player, just has to sort himself out.

You know your clubs in the doldrums when were debating who you’d rather have, Vela or Bendtner. Tomorrow let’s debate ‘what would you rather have, syphilis or genital warts?’. For the record, I’d rather have syphilis.

Arsenal have to many players like vela that walk around thinking they have made it already.sell those,I’d rather see Joe Barton in the team than half the midfielders we have now

You gringos don’t know what you have. Señor Vela will light up your Premier League like a fiery chiuaua let loose in el Presidentes palace! Señor Pendajco (how you say dickhead John Terry, no?) will be left dizzy as Carlos runs rings around him like offensive cartoon mouse with giant sombrero. Vamos!

Welcome to the jungle… of wordpress. | savagegooner

[…] Vela’s agent has also been out and about talking about his clients future. Vela is a player who divides opinion amongst Arsenal fans, while the talent is obviously there […]

Your opinion at the end of the article wasn’t neccesary. Just because you don’t rate Vela doesn’t mean he’s not good. He hasn’t failed in any way shape or form. He hasn’t even played! how he can fail at something he doesn’t even do.

Denilson is worse than him but has played a lot more, eboue is worse, Theo isn’t much better to be honest. Vela just needs to play.

Mike, whilst I agree that Walcott might not be much better than Vela technically, I think he applies himself and uses the skills he’s got. He is effective and offers something to the team. Vela hasn’t taken the opportunities he’s been given, and by all accounts his attitude is poor, you only have to look at the reasons behind his suspension from the Mexican team to see this.

Mike, there’s a reason why he hasn’t played.

Mate you can say any player is amazing if they don’t play. He didn’t force his way into the west brom squad..

If vela is happy to stay at arsenal and up his work rate and increase his aggression / work ethic I think he is a player that could be a late bloomer. Don’t know what money he’s on, but could put him out on loan elsewhere see how he goes. Keeping him for another season isn’t going to bankrupt us . The boss must still hold some hope for his development… What’s too lose?

[…] agent insisted earlier in the summer that the Mexican would staying at the club, but the arrival of Oxlade-Chamberlain, the rumoured […]