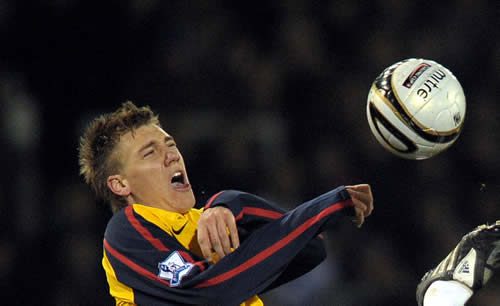 Arsene Wenger has confirmed that Nicklas Bendtner and Emmanuel Eboue are close to leaving the club.

Speaking after today’s 2-2 draw with Boca Juniors Wenger said, “They are both on the verge of a move but nothing has been concluded with anybody”.

Bendtner has not been involved at all in Arsenal’s pre-season preparations with Wenger giving the Danish striker permission to talk to other clubs. As yet no deal has been done and the manager was giving nothing away regarding his possible departure.

The Danish international has been linked with Sporting Lisbon of late while Eboue, who played for a few minutes today, was set for a move to Turkish giants Galatasaray.

“I don’t have any club in mind for Nicklas Bendtner because we are far from having done anything with anybody. I cannot give you any club because we have given him the permission to move”.

The manager also cast doubts over Samir Nasri’s future. The Frenchman took the captain’s armband for the second half during the Boca game but he could still leave the club this summer.

“We have to deal with the situation one way or another. In the next ten days we have to be clear on that front”, he said. “If you ask me if I want to keep him, I say yes. But he needs to be committed to that as well. I don’t give them ten days, the transfer period is until August 31.

“Ideally, we go into big games in two weeks, in the next two weeks we have to sort out problems out. There is no specific deadline of one day or 24 hours”.

You sure those quotes werent regarding Cesc man? Look alot like the Cesc quotes I read earlier.

Things certainly did not improve when Eboue came on today. Also, Nasri hasn’t exactly done much to merit his £20M price tag this pre-season, so perhaps we would be better served by just taking the cash and buying someone less likely to bugger off at the end of the season.

What on earth are you on about? Its pre-season FFS. Judging Nasri on a few meaningless friendlies is daft man.

I’m on about the fact that he has looked largely anonymous.

It’s Sid the apologist. You have certainly made a name for yourself lately in various websites claiming leniency to your deity and being rather aggressive to anyone who dares live on planet Earth and tell it how it is, eg Arsene is still taking down a downward spiral of mediocrity. It’s only a friendly? Give it a rest, it’s the same nonsense we have had to put up with the last few years. Utter garbage. But with the apologists still out in force ready to lavish praise on our dear leader and his failed project, nothing will improve. Do us… Read more »

Taking down a downwards spiral, is a good thing surely? Funny how you talk about Sid being aggressive, you must see the irony of this after your post, yes?

For one I am not pleased with Eboue’s departure. So what if he’s not first team. He has the reputation a bit like Nani’s in United. For me he’s one of the more energetic squad members who gives his best. And probably keeps everyone laughing as well. And as for Bendtner, he was never going to be playing in the first team for Arsenal. Good riddance. Finally, cmon Mr. Wenger! we need a hound of a defender with nothing else on his mind but to keep the ball away from the goal. Enough of attack-minded defenders. I am of the… Read more »

Samir Nasri was looking largely out of shape and slow today. He had one moment of brilliance in the first half, charging into the penalty area down the right, but instead of picking out a teammate at the far post, he dawdled in possession and had the ball taken off him by a defender. A friend commented to me that he was playing for us today,,, and I could only respond “Well, Nasri is out there, doing something, but certainly its not playing for us.” He looked lost for huge portions of the game, even when Chamakh played the ball… Read more »

Some good, some bad, same as it ever was « Arseblog … an Arsenal blog

[…] other news the boss confirmed both Eboue and Bendtner were ‘on the verge’ of moves away. The People report this morning that Arsenal’s demand for a £15m fee and […]

Wenger’s comments are all a bit cryptic at the mo. Bendtner is “on the verge of a move” and yet he “doesn’t have any club in mind”. How does that work? His Cesc/Nasri stories seem pretty confused too. He talks about reaching a conclusion in ten days then says “I don’t give them ten days, the deadline is 31st of August”
So Bendtner is on the verge of moving but to no particular club and the Nasri/Cesc stuff will be sorted in ten days or by August 31st. Cheers Mr W you’ve really cleared that up.

And one more thing………I saw you running around the Highbury pitch in the Villareal match we played in the Champions League……:)

lol actually i was there for that game North Bank lower!! great season

why didn’t bartley get a chance< even 5 minutes would have done if eboue is leaving why even bring him on? squillacci is the worst defender to play at the club since sylvestre ,stepanovs , cygan . why does wenger never critiscise his own players ? no wonder they want to leave he doesn't hold all the cards anymore . if he doesn't sort things out in the next week groundhog season is upon us or worse no champions league football 🙁 get rid of squillacci machete to the neck , sell fabregas for 35-40 million ,sell eboue for whatever… Read more »

Couldnt agree more, what concerns me is that we can’t seem to find players to sign and just go out and do it. We are in a position where we could have real cash for the first time
Cesc 40m
Nasri 20m
Bentdner 10m
Eboue 4m
Glichy 7m
Squilachy 1m
Arsenal board funds 30m

Why can’t we sign top transfer targets with this money the schnieders and neymars of this world. It’s clear we can’t compete for a whole season our squad is just not good enough

it’s simple! because board and arsenal wants to get rid of fans like u. They have been trying that for past 6 years but people like u just won’t give up. Go find a hobby mate, it will be good for both arsenal and u.

I didnt see the game as i was at a frickin wedding!! Did Nasri get a good reaction from crowd?? People need to calm down about this situation that he will leave for nothing next summer…i will have £20 bet on that a new deal will be signed up by sept/oct as he takes on a more central role and will not run down his contract to leave for dirty Mancs! Remember AFC is run as a sharp business and they wont let this geezer do what Flamini did to us….Add some muscle/steel to the defence tho MR W as… Read more »

if ebouse stopped mincing around the field, diving and humiliating the club in all ways, he would have been a good bench warmer. right back/ right winger, somone to throw on when we’re three nil up away to stoke to take a battering in place of nasri/walcott/mata/whoever/ as for nick ‘fuck me i’m so fucking good!’ bender i’ll be glad to see the back of him. he’ll probably sign for some seconmd rate spanish side and get fat while tucking away 15 a season and getting to sleep with all the brides-to-be at whatever local fucking town hosts his cunty… Read more »

Hate both Eboue and Bentner, fuckin’ disgrace to our club, sack the useless French manager too.

@genius that was me, glad someone remembered!

Now if only we could get rid of Diaby, it would be a good summer of clearing the crap out.

Reading many of these comments i am utterly disgusted. Quite clearly infiltrated by scum from the other end of the seven sisters!!! if your not, that’s where you belong, ‘cos you sure are not talking / behaving like arsenal supporters. Booing after a friendly….. for crying out loud, what is going to happen when we drop a point/s in the prem?? Get it right chislehurst twitchy!! our useless french manager has not failed to get the team into the CL, when on numerous occasions the so called experts wrote us off. No things aren’t perfect, but arsenal is a special… Read more »

i think he is talking about alumunia and bendtner.
Do u have any video evidence of who “both” are? He never quoted eboue did he? It’s always been “both” = alumunia + bendtner.
And i think u have been conned by media.

Sporting Lisbon have just confirmed the signing of Jeffren for Barca for 5 mill.
makes the Bendtner transfer look less likely. Barca now also have a further 5 mill in the kitty.