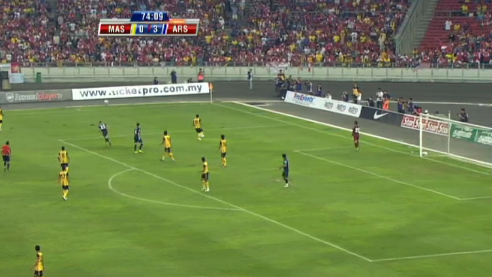 Arsenal have kicked off their pre-season fixtures with a 4-0 win over a Malaysia XI.

Arsene Wenger started with newcomers Carl Jenkinson and Ryo Miyachi and took the lead early on. Jack Wilshere was taken down driving into the box and Aaron Ramsey stepped home to tuck home the penalty in the 5th minute.

The game was played in high humidity and heat and the pace was positively Cyganesque at times.

Arsenal went 2-0 up in the 36th minute when Aaron Ramsey’s clever ball over the top of the Malaysian defence found Theo Walcott. He calmly lobbed the onrushing keeper to stretch the lead further.

The second half saw plenty of changes with Mannone, Djourou, Squillaci, Rosicky, Frimpong, Denilson and Vela all getting a taste of the action.

And it was Vela who put Arsenal further ahead in the 56th minute. Some nice build up play saw him clean though on goal and the Mexican, who has had more chips than a 17 stone single mother from a council estate, lofted it home beautifully.

He could have made it 4-0 almost immediately but headed straight at the keeper and then had an attempt cleared off the line.

Arsenal brought on Sagna, Nasri, van Persie and Arshavin, the latter replacing Denilson who was clearly unhappy and went straight down the tunnel according to reports.

The game dwindled out then until Arshavin’s clever play and lob set up Rosicky for a close range header to make it 4-0 in the 91st minute.

Overall the game provided a good work out for the Gunners who now travel to China for a fixture on Saturday.

Though Arsenal outclass the team they played, I think this game should help quell some of the worries and calls for Wenger’s head that we see on Twitter every day.

Ramsey was excellent, as was Wilshere. Miyachi and Jenkinson showed flashes of what they’ll be, and the rest of the squad were what we’ve come to expect…even Denilson. 😀

nice to see us start the tour positively, did vermaelen start? or get game time?

Vermaelen played the first half

Verm played the first half

Denilson storming off after being taken off after just 20 minutes of 2nd half action – very interesting move there by Arsenal. Really showing the player, and his agent, that he needs to be looking elsewhere if he wants playing time. Nasri running around like a man on a mission. To show Arsene he is ready for the new season? Show suitors that he is the real deal and they should step up negotiations? Who knows, I think the guy is a little off. All around it was great to see the boys in the awkward away kit getting some… Read more »

I am also very excited with the team chemistry between our younger group (Wilshire, Djourou, SCSZ, Ramsey, etc.) Really makes you wonder if this group sticks together for the next couple of years what they can accomplish.

“the Mexican, who has had more chips that a 17 stone single mother from a council estate, lofted it home beautifully”
HAHAHAHAHA excellent
it was a nice chip though

Surely the writing is on the wall for Denilson?

We can only bloody hope so. Then we could replace him with a competent midfielder.

just been lookin at the games highlights on sky sp news, vela’s goal was class, great to see the boys back playing, although the strip is horrible, a jockey would even refuse to wear it!! I think denilson knows his days are numbered, all I hope now is that we don’t pick up any “stupid” injuries while on tour, make one or two “top quality” signings whilst keeping who we have & we will be in good shape.

In the same way you pay managers off for sacking them (breaking their contracts) can the same be done with players? – I think this is the only way we can get rid of Denilson

Collin Morgan
Reply to  Fed up of Barca

I don’t think there are termination clauses on player’s contracts solely based off of poor performance and not wanting the player anymore. The PFA would go mad if they tried to pull a stunt like that I’d imagine.

Very impressed with Jenkinson, nothing flash but solid and quick, composed, and most importantly defended the right back area. Also good crosser. Wish he was a LB actually, we need one who isn’t an attacker first, defender second. One who won’t be caught out every time a hit and hope goes over the top. Ryo did his usual decent show, would like to see him make runs on the inside instead of waiting to collect the ball and take on the man, he could be lethal. At Feyenoord he became a bit stagnant because he was manmarkd and had to… Read more »

I’ve heard he is two-footed which makes me think he could possibly slot in at LB if needed. Arsene wants Gibbs to do the job though, hopefully it works.

Was really annoyed with Walcott’s performance sans the goal. looked so half hearted. let the ball roll out of play many a time and i can only recall one or two good balls in. even miyaichi crossed better

Xavi has come out on barcelona’s website saying Cesc is suffering. We need to screw every penny out of barca and get rid of him and replace him ASAP. This can’t go on anymore. His heart wasn’t in it last year. He will be worse this year. I’m sick of the whole story now and how their players and club get away with this bollocks every year. FIFA or uefa would of had any other club for tapping up. Ps watched the game. Ramsey and jack looked good. Good warm up

Most interesting – Wenger’s comments after the game as published on the Arsenal site. Does the Board support his decision to keep Nasri? Yes. He thinks so. I have £100 on Nasri staying at Arsenal put over a week ago – looks better by the day.

[…] after Arsenal’s 4-0 win over a Malaysia XI ,Wenger said, “He has always had a very good attitude. We are a big club with many good young […]

Hey Arse Chums – how was the Gibbster? Did he get much match time? Important season coming up for the young lad so would be good for everyone if he got off to a decent Orr-season start

Goonersville is right. Barca should be fine points deducted or something. FIFA are running scared of this club with completely no class or respect for anyone

After what Denilson said at the end of last season, he’s lucky to be on the tour at all. If he wants to play, then he has to bust a gut when he gets the chance, otherwise he’ll get subbed off.

It has to be a PR stunt taking Denilson!

IE show he’s worth more than a tenner..

In other news, Liverpool only managed to beat their opponent 4-3. Found that rather comical

Perhaps we’ve hatched a cunning plan to fly denilson home separately, only for the plane to mysteriously vanish, leaving us to claim the insurance money.

Just saw Vela’s chip on Arsenal player! I cannot believe how easy he commits those shots… Why, oh, why can he not do that outside of Carling Cup and friendlies?

Walcott’s was nice, too.