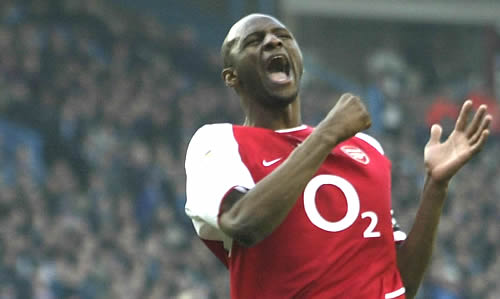 Former captain Patrick Vieira says he’s ‘gutted’ for former boss Arsene Wenger but understands why sections of the fanbase may have lost faith with the Frenchman.

On Manchester City’s US tour Vieira, who this week announced his retirement from the game, spoke fondly of the man who brought him to England from AC Milan’s reserves.

“I am gutted for him because I know how much hard work he has put into Arsenal and how he loves the club”, he said. “‘He arrives early and leaves late and spends more time on the training ground than he does with his family. But you can understand the frustration of the fans. They are used to winning and haven’t won anything for six years. For a big club like Arsenal it is difficult to go a season without winning a trophy”.

And Vieira believes the balance between good football and the physicality required for the Premier League is not right, saying “I honestly believe that the Arsenal team now are playing better then we ever did. The difference is we put silverware on the sideboard. That is what people remember, not how you play.

“Our team was more physical and responded better to the English game. Maybe now Arsenal lack the physical aspect. You need a balance to win trophies. If you look at United, Chelsea and City, the physical aspect of the game is there. The season is really long and hard and players get tired and perhaps need to work harder”.

Vieira, whose last kick as an Arsenal player was to score the penalty which won Arsenal’s last trophy, the 2005 FA Cup, will continue at Manchester City as a ‘development executive’. He has still to complete any of his coaching badges and perhaps in the future Arsenal fans will see him return home when the time is right.

Patrick is true class, shame we didn’t snap him up in some capacity. He could have shown the current squad what it takes to be a winner.

We need him there now. Everyone in football knows what Arsenal require, but Arsene Wenger.

Arsenal need Viera as a football ambassador? Don’t be silly.

He is blinded by the cash.

Sad he stayed at city, would have loved him to come back.

Can’t really fault what Paddy is saying here, we all know we need an edge to our team that is conspicuously lacking, he knows it, we know it, Mr Wenger knows it; the crux is, what is he going to do about it. Apart from the odd bitter narcissist, everyone of us can accept the Wenger years, his forethought has been mind blowing..alas in the last few years, results havn’t matched the vision. Its a seminal season for the team, the fans and most especially the manager, I for one, like Paddy Vieira am fond of our manager and hopeful… Read more »

He’s what he need in the dressing room, he understands the problems. But Wenger is such an arrogant fuckwit he doesn’t want anyone near him that might ask a question. I long for the day he’s sacked and I can get my Arsenal back – a team with players who play with passion and fight, wherever they end up in the league table.

Very poor view in my opinion. Viera in the dressing room? He has stopped playing. Should Arsenal have a pulpit erected in the dressing room so he can deliver speeches? He did his leading on the pitch. The manager speaks at half time etc. Ridiculous viewpoint.

Say what ? Whats this my Arsenal your talking about ? Do tell James, sure enough the last 5 years have been disappointing but if your seriously expecting me to accept that we had it better off prior to Wenger, you Sir are sadly mistaken..and as to wherever they end up in the league table…do me a fk’ing favour …you’d be no doubt one of the very first to cry for hanging, drawing and quartering for any manager that had us out of the top 4. Seriously, you’d be alright with 17th hey, as long as some bottle was shown… Read more »

We weren’t better off prior to him but we would sure as hell would be better off without him now. I would support any player or manager that is giving 100% to the club and shirt, not a self-serving manager that cares more about his precious ego than Arsenal and a bunch of wimpy, gutless players who are paid a kings ransom for continually losing to inferior teams.

Balls, James. You do know football better than any man alive. From the armchair in your living room, you obviously can see into your magical television, a fucking crystal ball that allows you to see into the hearts and minds of men. All those teams are absolutely crowing over their 1-0 wins over Arsenal last season, absolutely busting that they are crapping against relegation year after year, but hey, at least they aren’t playing for a world-class manager and with world-class foreigners who have won something. Fucking hell, Arsenal are in the champions league every season (and every spring) playing… Read more »

How can you disrespect a man who has done so much for The Arsenal. You are a disgrace and should go and support someone else. Arsenal clearly attracts some very unpleasant and ignorant charcters and you appear to be one of them.!

True, Paddy was class. But what’s all the talk about needing his services? Not sure if we contacted him but if we did and he snubbed us for City then he doesn’t care too much about the red and white anymore. Talk is cheap.
That said, inject the Arshavins and Diabys with a bit of the brashness in Vermaelen and Wilshere. That would be a good way to start.
And yep. One old player that we all know truly cares? A certain Thierry…

Arsenal are physical enough but what has kept them from wining trophies is consistency or to break it down further the current arsenal players lack the mental ability not to make foolish and costly errors. Hopefully this season players like cesc,jack,song,verms and r.v.p. can improve on this and greatness will be there’s

Anyone on here ever heard the term punching above your weight? That is what arsene make arsenal do. If you realize our wage scale and our transfer policy you know we are running between third and fifth on wages including transfer fees. If you know this and how we ended up there is nothing to really complain about except maybe be very close to something amazing and just falling short. Now anyone who calls for the managers head please let me know who you have in mind and how you expect them to do much better with the current structure… Read more »

I tend to agree with most comments here and Paddy has run his course done his thing and wants to stay in the shit end of Manchester for money that’s his prerogative. Arsenal are in desperate need of a leader in the team there is no doubt and you dont come across true leaders that often plus when you do they are not cheap but that should not as the 5th richest team stop us investing. So I would like to see positive moves there which I think most of us would agree if we see intent from AW and… Read more »

[…] some interesting comments from Patrick Vieira about Arsenal’s current problems. While saying this current side play better football – […]

But what is Paddy actually doing at ManC? He has no coaching badges and no coaching experience. I agree with the point above that Paddy did his leading from the field. Perhaps the “development executive” role is no more than a contractually agreed run-off period for after Mancini decided he didn’t need Paddy in field any more. If so then well negotiated Pads. If not, then learn the trade and, when you’re good, come and do it for us. You’ll always be welcome at the Emirates

Lets be honest, how different would todays team be with 24 yr old Paddy in midfield? Probably a successful one!

Paddy true legend and one if the finest players I’ve ever witnessed in the red & White. What his role would be at arsenal I just dont know however do you think he would stand back silent watching players like denilson and diaby half hearted performances, Patrick was a winner his medal collection speaks for itself, I don’t think we have anyone currently who instills that winners mentality. Hearing stories about rvp berating diaby at Blackpool for picking up a needless booking booting the ball away shows the rollockings required don’t come from pat rice and certainly dont come from… Read more »

We need ‘Le Long’ back in the dressing room.