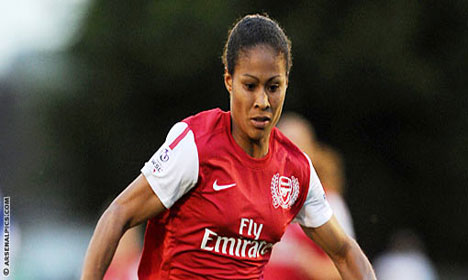 It was been a long ride but Arsenal ladies have delivered when it matters most and brought home yet another trophy. As usual they did it the hard way by taking an early two goal but giving away a soft one before finally putting the game away with a penalty for the third leaving the final score Liverpool 1 Arsenal 3. It has definitely been a difficult season chasing down Birmingham City Ladies but the coaching staff and the players must be very proud to have brought another trophy to the Emirates Stadium especially with the mens team form being so unpredictable.

Arsenal manager Laura Harvey had made a single change from the team which beat Everton 2 weeks ago with Danielle Carter moving from the right wing to center forward while Ellen White was coming on the right wing. The player omitted, Julie Fleeting, is currently injured. Gilly Flaherty continued at right-back, keeping Steph Houghton out of the team.

The equation was simple, win and the title was Arsenal’s. Draw or lose and it was likely to go to Birmingham. Considering Liverpool were bottom of the table with only one win in 13, a win was expected and the game started well with Arsenal spraying the ball wide well and using Danielle Carter as a point of fixation. From one of the well supported attacks, Rachel Yankey was found on the left wing and as she entered the penalty area she decided to shoot rather than cross and the power surprised Danielle Gibbons in the Liverpool goal. Arsenal were dominating the game at this point but were missing the final ball while shooting accuracy to finish off all the chances created was found wanting. Then came Yankey’s second goal. Michelle Evans missed an interception at left back and Ellen White was free to roam on the wing, she went to the byline and crossed for Rachel Yankey who made a run between two defenders and tapped the ball into the net from close range. It was Arsenal’s beautiful football at its best. Half-time came with a solid 2-0 lead that was needed as news came that Birmingham were 1-0 up at Doncaster.

For some strange reason, the team switched of at half time and came back at a slower pace, the movement was missing and the passing was a bit sluggish. Still with the game well in control nothing seemed to happen and the title was safely coming to the Emirates until a moment of madness in the defence. A long speculative ball was sent into the Arsenal penalty area, Emma Byrne came and called to catch it but Faye White decided to add the comic factor by blocking her which resulted in Byrne dropping the ball, White then lay injured on the floor and Brusell grabbed the easiest goal of her career with Byrne in no-womans land. It was disappointing to concede such a cheap goal but coming from Faye White who had a record 0% passing accuracy on long balls during the first half it could only happen to her. That goal unsettled the team and with Birmingham still ahead at Doncaster another mistake could have resulted in the title handed to Blues. A cagey period followed and with a run from the left wing Ellen White was pulled by the shirt by a Liverpool defender which resulted in a penalty. Kim Little dispatched with ease and with a two goal cushion the game was won. The game petered out nicely at a low tempo and soon it was the final whistle and time to receive the trophy the first ever FA WSL.

Congratulations to the 18 women for what has been a very successful season.  Next up is the continental cup starting next week to look forward to with an away quarter-final to …Liverpool.

Why don’t we just play the ladies in the PL? They have more talent, bottle, guile and tactical awareness than our PL team. Also, they have a winning mentallity, something we have missed since 2006!!

Let’s move some of the ladies over to the men’s 1st team.

We should start watching the women now, since we are the best there… 🙂

CONGROTULATION!!! To our ladies u ar beta dan our men thngs keep it up specially denielle cater

Congratulations. They probably have put up a better fight than the men’s team today.

a big congratulations to the ladies team, keep up the good work 🙂 🙂 maybe some of your organisation and game play will rub off on the mens team!!

Will coach Laura please say a word or two to Arsene about how to manage a team to win matches and trophies. Perhaps he can learn a thing or two… Well done to the ladies. At least that’s an Arsenal team I can support!!!

[…] it is Arsenal we are supporting, but the ladies team! No fear of such humilation, after all, the ladies have won the league! Hahah, how’s that for positive […]

[…] to the Arsenal Ladies, whose continued excellence is not remarked upon nearly enough. They defeated Liverpool 3-1 yesterday to confirm the club as winners of the inaugural Women’s Super League. This is their […]

This definitely makes perfect sense to anyone.