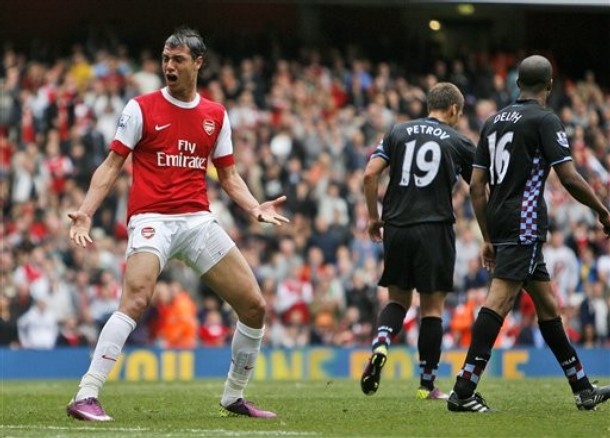 Marouane Chamakh believes that he can challenge Robin van Persie for a starting berth at the Emirates after accepting that he suffered a loss of form in the second half of last term.

The Moroccan international, who signed for free from Bordeaux in May 2010, began life at the Emirates as the club’s first choice striker after Arsene Wenger was robbed of both Nicklas Bendtner and Robin van Persie due to injuries. Working as the lone front man the 26-year-old proved himself a real nuisance for opposition defenders garnering a spate of penalties, getting on the scoresheet himself and linking up the play in the final third.

However, having been rested ahead of the hectic Christmas period Chamakh was predominantly reduced to appearances in the domestic cup competitions with Van Persie restored to the team in the New Year. Seemingly low on confidence in the final months of the season, the man with the buzzard hair was nothing short of abject during several Premier League cameo performances as the side limped to fourth in the table.

Speaking about his first season with the Gunners and stressing his desire to repay the faith shown in him by Arsene Wenger, Chamakh told SkySports.com:

“I want to make my name in the Premier League.

“I started well last season and lost my way. However, I want to make a name for myself here.”

Despite his poor showing since January, several clubs have been linked with a move for Chamakh’s signature with AS Roma and Marseille both tipped to make a move. Despite the speculation, the player himself insists he is fully focused on seeing out his contract with Arsenal.

“I’ve heard a lot of rumours about me leaving the Gunners, but I have a contract here. I want to honour it and make myself No.1 in my position. I am looking forward to that.”

If Chamakh can keep his form over an entire EPL season, if Gervinho can take his excellent pre-season showing into the real thing and if RVP can stay fit, then our attack won’t be half-bad this year.

I like Chamakh, he’s getting a bit of stick at the moment because his form is awful, but that doesn’t make him a bad player.

He is full of running and has overall a good attitude.

Haven’t we all been moaning about players with character and work-ethic? Bendtner may be more gifted than Chamakh, but Chamakh puts in more effort. Can you honestly tell me that isn’t what this club has needed over the past few seasons?

I really hope we see his bordeux form

Arent we forgeting something? Was he top striking in Boudoux or from the wing? How many goal did Bendtner score and how many did Charmak scored? Rank all strikers and place Charmak in where he belong having scored 12 goals in his first season. How many striker scored such? Tores? How many did he score? How many did Walcott score despite playing more than Charmak. Why give dog a bad name to hang it? This is the same way we catigated Ebue and now he is going out. Which wing has he consistently played other than rotating him from one… Read more »

jacobs and ken are right, we are always whining about players with no workrate. chamackh was the hardest working player in the team for the 1st half of the season year, and also played very well. then he was sat on the bench and even worse was expected to make an impact with cameo appearances in a team that was falling to pieces. it was experienced arsenal players like nasri etc that did the damage, prancing around like a proper egotistical pansy.chamackh will come good if he follows RVP direct style and not wengers pass the ball to death, look… Read more »

He actually made a few names for himself during the second half of last season….

Message to all: if you’re going to be negative about Arsenal, at least do it like this.

The headline was just crying out for that….

Well, hopefully this season the attack will stay potent during duration of the WHOLE season. The biggest worries is still the defense and possibly the midfield. Depending on departures. All I’m gonna say. Good luck to you Chamakh and I’ll hope you find your form again!

i agree with bg_gunner, i’d take bendtner any day.

chamakh doesn’t seem to have the right mentality. he’ll be through on goal with just the keeper to beat and turn and look for a support pass. what kind of instincts are those? he should want to score and be confident in his ability to score.

while NB52’s confidence bordered on arrogance, he has proven in limited appearances that he can score goals and he still has room to improve, unlike chamakh. i’m disappointed to see bendtner on his way out to make room for this guy.

I wish Wenger just for once opted for RVP and Bendtner. Let them play 10 games together, with no pressure or cocky comments in the meantime, and I’m sure they’ll kick ass

agree…would love to see rvp and b52 together up front. Bendtner scored a lot of goals and he was often on the pitch in league cup games with diaby and denilson. So he had to spend a lot of time defending…

I would say that Bendtner’s confidence bordered more on delusion, but, I do think he is a good target man (our game; poor crossing & deploying him on the wing, has never suited him). Poor first touch, clumsy but nevertheless if played in his correct position could cause problems. Has never been ready/still too young to lead our attack, but a good option off the bench. Bendtner, Arsharvin, Walcott all played out of position. For me a front two of RVP & Arsharvin would be deadly. As for Chamakh, I think the talent is there, he is good on his… Read more »

Yeah….like the goal Bendy scored against Barca when no one was around him when through,,,,Mascherano was 10 yards away,,,,,He couldn’t even shoot , forget shooting on target and scoring an obvious centre forward goal……..
Why Bendy is leaving now is his decision of delusion and not what Wenger wants…..
Bendy is similar to Denilson in someways(going backwards in terms of ability)…..
Chamakh had his first season in EPL….Let’s wait and see….

I want to see him succeed so badly. It looks like he has the drive to get through this slump, I really hope he can bring something to the team off the bench and poach some goals.

playing Bendtner with rvp, would mean switching to a 4-4-2, and I am unsure wenger wants to do that

And cut that ridiculous hair!

he looks like the son from that dinosaurs tv show

haha. he’s defo got the most man utd haircut i’ve ever seen on an Arsenal player….

I have no idea what what jacobs feme said.

I really want him to do well. I wish he would stop playing “the Arsenal way” (ie looking to play someone else in all the time) and just bang the ball in the net whenever he gets the chance. That’s what will make his name, not always looking for the assist.

We need Chamakh up front – someone tall, with a good head is missing from our set pieces both up front and at back.

when the club isn’t winning anything the caliber of squad players drops. top quality strikers won’t come to this team to play second fiddle to RVP when they don’t get a league winners medal for their troubles. we need to add success on the pitch to our strong position off it and we will improve the overall squad. given our current position chamack isn’t a bad backup choice. he started well and i really think the pace of the prem broke him mid season. he said himself over christmas he was physically exhausted. lets give the lad the first half… Read more »

he’s a good lad, works hard, and showed promise at the start of last year before his legs gave up.