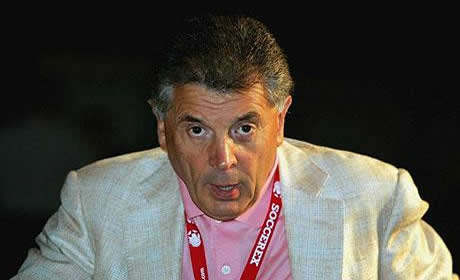 Speaking to the BBC about the possibility of Wenger leaving, Dein said, “That’s always an option open to him because it could come to a stage when he will say, ‘Well, I have had enough.’

“At least that’s how I feel and I feel the fans should feel that. They should at least give him the respect that he deserves for what he’s done. It’s easy to get rid of people and then what?”

While many will feel Dein should offer advice to his close friend rather than Arsenal fans, the man who earned £75m when he sold the shares he bought for £300,000 to Alisher Usmanov claimed to understand the frustration felt by many.

“Last season was particularly difficult because they were nearly there. At one stage, a few months before the end of the season, competing on four fronts and in the end coming away trophyless is difficult, perhaps, to accept.”

Perhaps, indeed. Perhaps almost as difficult to accept as the fact that Dein’s son was a driving force behind Cesc Fabregas’s move to Barcelona and is now lurking around the place as Robin van Persie’s agent. Perhaps.

The full interview can seen on tomorrow’s Football Focus on BBC1.

Can someone just take out Darren Dein? He’s a diseased minge barnacle. And David Dein should cock off with his opinions too. I think what he’s saying is kind of right but he shouldn’t be the one saying it. Some peoples agenda against Wenger is a bit much. If someone had told me the players who would be leaving this summer a few months ago the only one I’d be sad about would be Cesc. It’s just the lack of movement the other way that’s worrying. It’s too early to pass judgements. Let’s see where we are in January before… Read more »

if wenger doesn’t buy now, he’s not going to buy in january.
dont hold your breath, arshavin was a one time wonder.
there are preliminary conclusions to be made at the end of the transfer window, and at the end of the season, thats just it.

I don’t mean we’ll sign someone in january, i mean, we’ll have a better idea of the quality of this team by then because we’ll be half way through the season and the problems will be more glaring unless people have stepped up by then.

Thanks argonaut. Quite proud of that myself! oh, my name was different earlier! heh.

Dein shd do well to remind his neighbour that his comments to the media often is the source of backlash from fans and he ought to do better. If he has nothing good to tell fans then it’s better he says nothing at all. His comments have too often left fans guessing what he’s really trying to say, almost sounding cheeky at times. It’s unfortunate he’s going through this at this time, and some of his better players don’t wanna continue with him. But i think he brought it all upon himself with his reluctance/stubborn attitude especially in difficult times… Read more »

Let’s be clear here. Cesc was the driving force behind Cesc’s move to BCN.

All the sam, it would be foolish to overlook the ‘influence’ of Darren Dein on some of our players.

Henry, Cesc, Clichy and if you’re not worried about RVP I would suggest you ought to be.

If we don’t qualify for the Champions League next Wednesday, we may find ourselves without a manager. What will Dein have to say then?

No he won’t be fired but he might just resign. The Champions League means everything to him.

Can’t believe some people want this orange cunt back at the club.

Savage is a Dave
Reply to  William

Off topic – is ryo available for tomorrow’s game against liverpool

it has just said on sky that the ugly little lezzer nasri is not far away from joining shitty. good fucking job. CUNT CUNT CUNT

From the man who sold out Usmanov and whose son runs around unsettling our best players. F*** OFF DAVID!

Dein has already benefited from the club and his son is also making millions selling Arsenal players.

Asenal has made the Dein family millionaires

Ha! Respect for Wenger? Respect breeds respect. And as the last few seasons have showed, we see a manager who lies to the fans (‘we’re not buying players because we’re only after ‘Super talent’ etc) and ignores the main problems which everyone else can see and is basically sticking two fingers up to the fans, arrogantly continuing on with his flawed theory of bargain-bin inexperienced youth – a theory that no other club in the Premiership follows – I wonder why? As for the increasinging minority of Arse(ne)-kissers, who blindly follow our increasingly stubborn and deluded manager, a reminder: Arsene… Read more »

I don’t know what if do if Mourinho was at Arsenal. It would make me feel sick. He’s such a self congratulating spunklapper. Plus the board wouldn’t have him anyway. He likes spending money too much.

Just listening to the whole interview. Beeb are serious shit-stirrers, they took a lot of the quotes out of context.

Not that I am defending Dean here, but he actually says that fans have the right to their own opinions while calling for appreciation of what Wenger has done and is capable of doing. No where as patronizing as they made it sound.

Wenger deserves no respect, atleast not again. He is obviously delusional and he’s going to run the club to the ground and then end up leaving. It’s fans like us that will be here for the club then. So i say screw Wenger and screw Dein, and any other individual that has been remotely associated with the clubs continued slump over the past year. 4ever a Gunner

The guy is the most successful manager in the history of the Club.

If anybody deserves no respect is the short sighted, naive, pessimistic, irresponsible people like you who claim to be a ‘fan’.

wenger doesn’t deserve respect because he is clearly wasting time , he’s just waiting till the window closes and then he can say “we tried to bring the super quality in but couldn’t find it” etc , he has at least 30 mill to spend now even before nasri leaves so whats he fucking around at? we have to concentrate on liverpool he says and the next thing will be we have to concentrate on udinese the list goes on with the amount of games we play ,added to that this stupid charge thing will keep wenger worried about any… Read more »

I don’t know where this is coming from.
Tell us Dein how we have dis-respected him. We respect him a lot.
Fair criticism doesn’t count to disrespect in my opinion.
We all know that the squad needs depth.

@turq- how optimistic are u abt d current squad. Left like this, they will most like not get a 4th league position. And u are such a dumbass 2 have left d ‘atleast not again’ from my quote. He is- so What? I say thanks for what he’s done, and out he goes now. He has done absolutely nothing from the footballing point of view over the past 6yrs and deserves to be kicked out. No other club could possibly tolerate such under achievement

No text speak, please. Thank you.

Why isn’t Wenger making RVP sign a contract now? Even if he has to tie him down and torture him?

If we lose Robin, we are screwed.

I am not quite certain what the Dein family’s agenda is, but they have grossly enriched themselves at the expense and detriment of the club and it would be reasonable to expect that any end game that they are working will involve more of the same. It should be noted that Mr. Orange only seems to pop up in the news when he’s working some angle. And i cannot be the only one with a raised eyebrow regarding the Arsene-David-Darren axis. If Wenger wasn’t so successful, I wouldn’t be surprised if Kroenke didn’t clean house to rid the club of… Read more »

hohoho down we go

i think our board, coaching staff and wenger are getting too old. they have lagged behind in football. we need to inject new blood, younger coaches, new ideas. we need to revolutionize arsenal