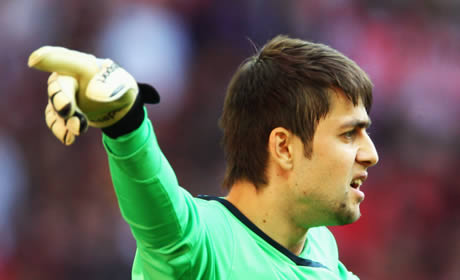 Lukasz Fabianski believes that the departure of Cesc Fabregas provides the perfect opportunity for Arsenal’s other midfielders to make their mark on the Premier League.

Recognising the importance of his former captain, the Polish stopper made clear that the likes of Jack Wilshere, Aaron Ramsey and Tomas Rosicky were now integral cogs in the centre of the park and must take responsibility for providing ammunition for the attackers.

“Cesc was a massive player for us, he was always a player who was giving the final ball,” Fabianski told Arsenal Player.

“Now I think we have to split this between the other players; they have to take more responsibility on their shoulders.

“Jack [Wilshere], Aaron Ramsey and  Tomas Rosicky, those players have to step up more and take that responsibility.

“We know that Cesc was a great player for us. Every single season he had about 20 assists and was scoring loads of goals as well so I think he will be a big miss, there’s no question about it. As well though, there are chances for other players to step up.”

One of the new players who will no doubt be vying for a place in Arsene Wenger’s starting line-up is Alex Oxlade-Chamberlain. The 17-year-old Southampton Academy graduate has been on the bench for all three of the Gunners competitive matches this term and according to Fabianski has the quality to make a difference in the short and long-term.

“You can see in training that he is a very talented player, he’s really good on the ball. Technically you can see that he has a great ability and I think he will be a great addition to the squad. I’m looking forward to seeing him in action.

“When I look at him in training he looks pretty decent. You can see that he is a really good player on the ball, he likes to play the passing game. That’s good for us and Arsenal. The way we play is a passing game so he’s a great addition.”

Fabregas’ departure has not only left a gaping hole in the midfield, but also forced Arsene Wenger to appoint a new club captain. Robin van Persie, previously deputy to the Spaniard, has since been handed the armband in a decision which Fabianski whole-heartedly supports.

“The one thing with Robin is that he really speaks his mind. He is never afraid of saying something to you and I think that is a positive thing about being a leader and a captain.

“He is a fantastic player, he really represents Arsenal well and I think the whole team listens when he speaks. He has big respect within the team and I think that is why he has been selected as captain.”

Time for Fab21 to start pitching in on those assists lol.

I think we’d take assists from anyone at the minute. We’ve been woeful so far…

I’ve heard Wenger is actually going to use Fab as a replacement for Song in the Premier League while he is suspended. But many say flappyhandski would not be the best at the holding role… (this is such a terrible remark I don’t even know why I posted it)

I only noticed your joke after a second reading.

If I was the number two keeper I’d probably mouth off a lot too. He can say whatever he likes cos he’s the least likely to play of all the subs so no responsibility.
Though, what he says is true though.

well, we can get back to the “disrespectful” chanting then.

I agree, Cesc going means everyone has to step up. But how many times have we heard, ” with xxxxxxx leaving, someone will need to step up and take their chance.” over and over again for that last 6 seasons. We need, have needed for a long time, experience to mingle with our prospective talent. Not marquee signings, just good solid strong players to help the younger guys improve. Mata has gone to Chelski to ‘win trophies’ (earn M£GA BUCK$), but what he said is hard to argue with. This Arsenal side don’t look capable of winning the league. I… Read more »

Mata maybe right, but it’s a little tough to swallow, given the team he was on before. “Arsenal and Spurs don’t have ambition”? You said you would be happy to stay at Valencia, for fuck’s sake!!!! A team up to their eyeballs in debt with absolutely no way of paying it off. Portsmouth will win the Premier League before anyone other than Barca or Real win La Liga. “Ambition” and “Valencia FC” should not be used in the same sentence.

As if we needed another reason to hate Chelsea. Forget Nasri, boys: there’s your cunt.

Come on lukasz who’s going to step into a world cup winners shoes rosicky ?Ramsay ?
Rosicky is finished at top level football he has no cutting edge and cheaply gives away the ball . Ramsay isn’t ready to take on the creative mantal

Inspirational. Once more into the breach dear friends, once more. Or, rather, calling upon lambs to accomplish a task only fit for lions. You aren’t helping, mate.

Most of us cried out last year for more signings, they didnt happen, we didnt win anything again and two of our best players left, what if he had bought a DM and a CB last year, would we have won the league, would fab stayed?