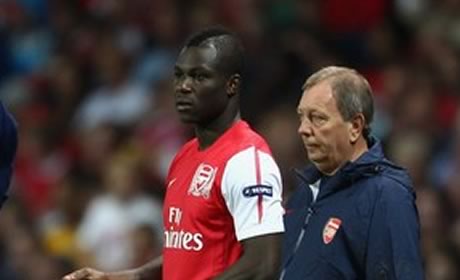 As if the Arsenal manager didn’t have enough on his mind at the moment, midfielder Emmanuel Frimpong wants to give Arsene Wenger a selection headache. Of the righteous kind!

The youngster made only his second first team appearance in last night’s 1-0 win over Udinese, and while he recognises his chance has come because of high profile absences and injures, he’s determined to take it.

“I’ve been training hard to get into the first team and now the boss has given me my chance to shine”, he said. “There’s always the possiblity when big players leave that you can get into the team and I hope that if I get my chance I will take it and show what I can do”

Frimpong praised last night’s opponents but is sure that Arsenal can build on the lead they’ll take to Italy in two weeks time.

“I thought Udinese were a very technical team, they played good attacking football and they put us to the test but hopefully when we go to Italy we can win without conceding and go through. We’ve won today and not conceded but to be fair they could have scored a couple of goals. In the second leg hopefully we’ll show them that we are a good team and win the game”.

The 19 year old could start his first Premier League game this weekend against Liverpool due to injury and suspension. Thankfully he’s built like a brick shithouse and will, hopefully, smash the scousers like they smash mugs.

haha worrying times that we need a 19 year old to start his first game against liverpool…agree that hes built as fuck however!! not too sure bout his rapping skills though lol

A certain Ray Parlour made his first start in an AFC shirt as a young player away at Anfield.

i won’t hold my breath then

I remember it vividly unfortunately. He looked awful lol.

The boy is quality and I’d expect him to play a lot of games this year. Very raw but to me a far better option than the likes of Denilson he’s effectively replacing.

sJ, how old was Cesc, Walcott and many others too numerous to mention? Everybody has to start somewhere and why not against Liverpool? He’s unlikely to play the whole game, but he’s quite useful to bulldoze his way through the ‘pool’s defence!!

The defense is the weak spot for them as well!

micky readman
Reply to  Save 75 cents

Agreed that he needs to start somewhere but not in a game of this weekend’s magnitude. A few years ago most of us were ok with Wenger taking gambles on young players bc of his track record, but as it stands now we can’t afford to take any gambles (not Gibbs on injury, not Chamakh on a hope he’ll return to form, and certainly not on a youngster which Arseblogger stated has 6mins of career football to his name).

Eastmond in the Champions League last year, anyone?

You need to be integrating these players in the cup, not in prem league matches.
Our squad is badly short of experience. Its not just a case of needing 1-2 quality players now, its needing 4-5 players.

I can see him replacing Song in a year. He’s the natural DM not Song, Denilson or Diaby. He’ll be the player we’ve needed in midfield after Vieira left.

Let’s not get ahead of ourselves, eh?

to be fair, saw him in the emirates cup last year before he did his ACL and he looked good quality next to wilshere. not to say I wouldn’t mind seeing parker coming in for a few seasons as some more experienced holding midfield cover/competition for song (especially given song’s lapses in judgement and concentration in the first two games of the season)

Why some supporters build so much hype around these kids that can only play for arsenal in a champions league playoff. This team is way below average, they will be embarrassed in Italy. Liverfool and Manure will beat arsenal, because this team is so feeble just like Arsene Wanker brain

I’m sorry GUNS but Liverpool are no better than us. A draw is the best they will get

GUNS doesn’t sound like an Arsenal fan to me.

GUNS It think there were a few empty seats at the City of Manchester Stadium (Ethiad Stadium or whatever). Why dont you go fill them

Speak to you after Saturday. We will wen.

FUCK OFF THIS SITE THEN YOU FUCKING NONCE CUNT.

I’d rather have him in the holding role than Denilson or Diaby. The boy just needs to time his tackles better. He has the stature to succeed and I’m not worried about him making his debut against Liverpool. Remember SZCZ made his league debut against Man Utd and CL debut against Barca.

Anyone else terrified he’ll play well and therefore give Wenger an excuse not to buy? “He was out with injury, so he’s LANS, if we buy we kill heem…”

Wenger wont buy a defensive midfielder even if Frimpong scored a hattrick of own goals, got sent off and broke his leg.

I believe we have a 17 year old future world class defensive midfielder in the youth ranks just incase Frimpong gets injured. Who needs to buy 🙂

Well we would have the more experienced players if they didn’t all sod off elsewhere as soon as they came to prominence. In a way, I think Arsene is starting to appreciate the value in buying good British players as they are less likely to bugger off “back home” or anywhere else for more money.

Oops, that bloody submit comment button is too close to the text.
Anyway I was saying Frimpong yiddle I Po.

he’s DENCH!! (whatever that means.)

Heskey is bulit like a brickhouse but he is still sh..

If he’s going to follow the Wilshere example then he could be impressive for us. By that I mean a calm, mature performance – not being too eager to impress and giving away fouls.

DMs have such a fine line to walk sometimes, so lets not pile on the pressure, eh?

Everyone’s seen perfect examples in the past of why Wenger has belief in his methods with developing youth. Unfaltering belief, however, can sometimes be dangerous, as we’ve seen in recent times.

Youngsters naturally make mistakes and cost you points during their development, and at the risk of repeating myself, there ain’t no scope for that this season.

I hope frimpong does play on Saturday, and it’s a shame wilshere is injuried because I would of been proud to see two of our own from the age of 9 playing together. Believe me this lad would of played quite a lot last season but had that terrible injury. Frimpong and wilshere would form a better partnership than wilshere and song. Yea I know there both young but the club rate frimpong as high as they rate wilshere.

Frimpong: “I will never leave Arsenal even if I get released I will beg on both knees to stay they gna [sic] have to escort me.”
That’s exactly what I like to see, players who love Arsenal, all the best to Frimpong, looks like a solid contributor

Frimpong is a scrappy jacked Gooner! I love em! Prefer him over a player that may be more technical, but lacks heart. Come on you Gunners!!! As others have said, let’s get behind this team. They may be a young scrappy bunch, but they have heart!

All the best to the lad this weekend, I’m actually looking forward to seeing him up against the Scousers. Great test for him, I think he’ll do well.

Arsenal move for Hazard? Mauro Zarate for £10m? No contact on Cahill? « savagegooner

[…] as they both serve three-match bans. Song’s young replacement, Emmanuel Frimpong, wants to make the most of this oppurtunity. “I’ve been training hard to get into the first team and now the boss has given me my chance to […]

need to sort ur lyrics out mate drop a few words will sound better like this imo…..

Definitely got something about him (apart form the obvious size/strength), but he just looks a little to raw for first team action at the moment.

Still a country mile above Denilson & Diaby though.

Wonder if he could play in defence…

diaby will come good mate, trust me, i rate him hes got great feet and great ability, his time will come….

i thought the 1st time i seen diaby heres the new viera, hes gone back a bit with injuries and form since then but i still belive in abu.

I think Frimpong will be ok. These kids have to start somewhere and with the problems we now have its his chance to make a statement. I think we can have Liverpool if Arshavin is up and firing he’ll give flanagan real issues. Cmon you Gooners!!!

[…] Archduke Frimpong Frimpong III talks about taking his chance. With Song’s suspension, injuries a-plenty and fewer signings than a Theo Walcott book launch he could very well make his first Premier League start on Saturday against the Mugsmashers. And surely any song for this lad has to be to the tune of the Flinstones? […]

To the tune of The Witch Doctor:

French man seen in shop checking out something german at the back. When he got to middle he seen something spanish, then he moved to the front and seen something italian he liked. He put them all in his trolly and went to pay. German £5 Spanish £20 Italian £12 Grand total £37 Checked his pocket and handed over a tenner. Security was called – leave the goods or pay the price. Moral of the story if you need the goods pay the price. Arsene we need the goods our cupboard is bare. Please note that younger players are more… Read more »

[…] The sooner the better because Alex Song has been suspended for 3 matches. We are already without a like-for-like back up for Song so while it was expected, this is bad news. Frimpong is slated to take his place and stake his place in the first team. If he does start, it is his only his third 1st team game. He showed plently of hunger and energy against Udinese, but his inexperience showed in the freekicks he gave away. The youngster however says: […]

I opened the door to this forum there, had a look around, and walked slowly backwards, quietly pulling the door behind me.

[…] Frmpong is the only available personnel that can play in that role and he has said that he’s determined to take that chance. Emmanuel Frimpong didn’t do much against Newcastle but showed himself as a player quick to […]