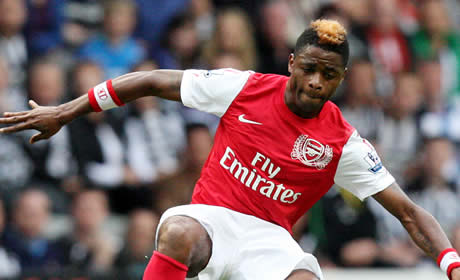 The FA have confirmed that Alex Song will serve a 3 match ban for treading lightly on Joey Barton’s leg during Arsenal’s 0-0 draw with Newcastle last Saturday.

In a statement they said, “Arsenal’s Alex Song will begin a three-match suspension with immediate effect after he accepted a charge of violent conduct.

Song was charged following an incident during Arsenal’s fixture at Newcastle United on Saturday, August 13”.

Song will miss Liverpool, Manchester United and Swansea although he will be eligible for Arsenal’s Champions League second-leg qualifier against Udinese.

he was stupid to do it

He should have completely fucked Barton, that would have been worth 3 games

In all honesty it was worthy of a 3 match ban.

I for one would draws from the next 2 prem games. any win would be amazing, but given the standard of opposition and our paucity of options (at present) any sort of result is a positive one.

Sod that – we should easily beat Liverpool and raise our game enough to beat Man.Utd too. Frimpong will take over from Song, hopefully Jack will be back against Man.Shite and Arshavin will do his stuff (again) against Liverpool. 2 draws will be a big disappointment – in my opinion.

Danny, that’s good confidence. Don’t throw your toys out of the pram if it doesn’t go that way though

A home win and and an away draw is the minimum we need. I’d take vice versa, too. I might even prefer that as I think any points taken off ManU will be worth double. Liverpool will drop more points than ManU over the season.

Mate, playing away at old trafford is a tough match. I’d love to beat them, and since their squad really isn’t that great they seem like a team we should be able to beat (more than chelsea or city imo) but I think I would take 2-3 points out of the next two

Incredibly stupid action by Alex Song. Regardless of the opposing player very stupid. Barton is a thug but, are players should be above that sort of childish behaviour. If this had been another player from another club on one of ours then the howls of incredulity would make many fans hipocrits.

We now go into a difficult period of opposition without an important player in an already thin squad. GRRRRRR

Song could do with the rest to be honest, his brain is clearly tired. Firstly stamping on Barton thinking no one will see it, then getting a 3 match ban for his troubles. Then playing the 90 mins last night totally forgetting what position he actually plays. Maybe he thinks he’s Cesc natural successor in the team.

“Song will miss Liverpool, Manchester United and Swansea although he will be eligible for Arsenal’s Champions League second-leg qualifier against Udinese.”

Was hoping for something funnier to finish off this piece 🙁

Absolutely ridiculous thing to do even though Barton is a cunt. We’ve now got utd and liver who would test even our first eleven. If we get a draw from each match I’ll be happy enough and quietly surprised.

Hey, come the Blackburn game he’ll be a LANS.

Signing Parker (on loan if Wenger doesnt want to throw money around) would be great cover for these three games and for the African Cup of Nations.

If I was a top quality foreign player looking at this match and the way respective punishments have been meted out, I would say “[email protected]#* off” if ever an English team came calling. The FA (and some fans too) seem to desperately want to return English football back to the dark ages under the mistaken delusion that things were much better then. They weren’t.

I hope bartons balls fall off the wanker

See this is a prime example of a person NOT thinking about the team first! He should of known doing anything like that to that blow hard would be seen by the all seeing FA, duh….. With what we have to field during the month of August meaning Prem wise we look awful. I for one do not expect AW to spend on replacements because he only looks for exceptional quality when we all know there is PLENTY of players out there to fit the bill, plenty…. I promise you I’m no doom and gloom’r but this has to be… Read more »

Oh Wenger, oh Wenger, Wish you were a big spender,  Just sold Fabregas, Now time for Nasri & Bendtner. Clichy gone and Eboue too, Time to go out and buy someone new. Defence is our weakness so that’s where I’ll start, Unfortunately not solved by Alex Oxencart… There’s Samba or Cahill,  Or possibly Dann, Even Jagielka if you don’t mind the older man. Further up there’s Jadson and Hazard as well, Whatever happens, do it soon! They need time to gel! No Mata?, no matter, Just find someone good, Who’ll help us win trophies the way Arsenal should. So do us… Read more »

You forgot the “PS Nasri is a cunt “

The entire human race has confirmed that the FA is a fn joke and should serve an indefinite suspension.

Yeah, the transfer seasons not good for productivity.

Brainless muppet, deep shit enough without that stupid act, i really fear for Our season and wengers sanity

it pisses me off that Barton wasn’t punished for man handling gervinho. was song did was sheer stupidity, but I have to question why when both of our players are now banned for 3 games, Barton gets away scot free?? surely the games footage was reviewed prior to brandishing punishments so why leave Barton off? In truth I am not one bit surprised. be it with the punishments, who was punished, or the speed at which they were handed out. the FA have once again shown how inept they are. had this been Man utd, Liverpool or Chelski, Barton would’ve… Read more »

Mooro
Reply to  The hurler

Because he’s Joey. You know Joey – wouldn’t hurt a fly but if he feels wronged he can’t help himself…..according to his cunt of a manager anyway.

If the FA weren’t so endemically incompetent, you could easily see a case for him escaping because he’s not a foreigner….only foreigners dive/stamp on people obviously. Not salt of the earth types like Joey.

Looks like Frimpong could be in for a busy week. Csz too in all likelihood.

shite, just what we fucking need!!….f.a are cunts….

song should have booted barton in the knackers in hindsight, same ban surely!

next time song let the likes of barton get on with trying to fluster you, there game will suffer due to that and your game will improve….

leave the red rag in the changies kid!

nasri the f.a and barton are cunts of the highest order…….

However incompetent the FA is – and they are – I’ve seen fairer decisions in the World Wrestling Federation – Song’s actions clearly deserve a three match ban.   He’s a heart and guts type player who will do something that dumb every once in a while.  He’s never gonna win whatever football’s version of hockey’s Lady Bing trophy (given out anually to the guy most likely to help old ladies cross the street and fail to drop the gloves) is, but fuck that – we don’t need any more players who would. He stomped on Joey, he got a… Read more »

I bet Pardew said to Barton, “go wind them up Joey.”

The result? Two players out for three matches.

To the flintstones tune.

Frimpong
He is frimpong
He’s the third one in his family
He plays
For arsenal
The best team in history.