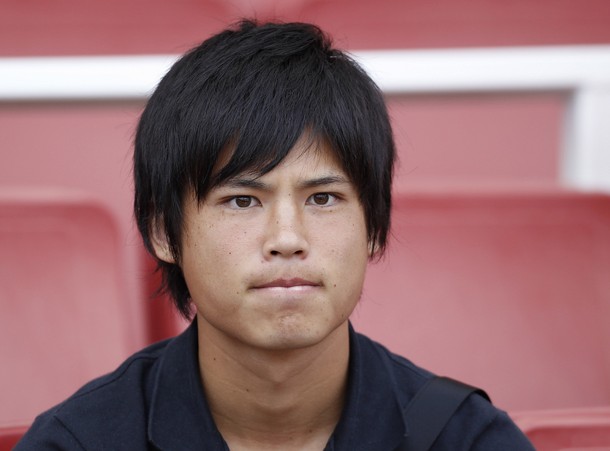 Arsenal have confirmed that central midfielder Samuel Galindo will partake in a second year on loan in the Spanish second division as he looks to gain further first team experience.

The 19-year-old Bolivian proved a promising prospect last year with Salamanca and will spend the upcoming season under the guidance of Gimnastic De Tarragona.

Galindo is the second youngster to have a loan move to Spain confirmed with Brazilian striker Wellington Silva already sealing a deal with Levante. Left-back Pedro Botelho is also expected to further his development on the Iberian peninsula with Rayo Vallecano closing on his signature, according to Young Guns.

Closer to home and 20-year-old goalkeeper James Shea will play for Dagenham and Redbridge this season.  The Academy graduate takes over between the sticks at Victoria Road from Arsenal goalkeeping coach Tony Roberts who has finally retired at the age of 41 after being offered a full-time role at London Colney.

It appears that further loan moves could potentially be afoot before the start of the season, although one player who Arsene Wenger appears determined to keep on his roster is young Japanese international Ryo Miyaichi.

“My plan is to get a work permit for him and to put him on the pitch for Arsenal Football Club,” the Frenchman said of the 18-year-old last week.

It remains to be seen whether the Home Office grant Miyaichi the work permit he was refused in January, but having impressed in Holland with Feyenoord and on the pre-season tour of Asia, it appears Arsenal are increasingly confident that they will seal the necessary paperwork.

Putting the player’s growing reputation to good use Wenger has cranked up the pressure on the Japanese FA to call up Miyaichi to the full national team squad by refusing to release the starlet for an under-22 friendly.

“Arsenal have told us they would be only be willing to release Miyaichi for the (senior) national team,” Japan Football Association technical director Hiromi Hara told a news conference on Thursday.

If Miyaichi were to seal his first full cap it would almost certainly aid his chances of featuring for Arsenal this season.

Pedro Botelho needs to be sold. Last thing we need is more bottlers.

And speaking of bottling, I do hope Miyaichi can seal his first full cap.

Pedro Botelho? He had a fantastic season last term.

i think it was a joke based on his name…..

Does Galindo ever have a chance to break into the first team eventually?

Galindo looked very promising when we signed him. An Arsenal comparison might be Edu, tall left footed with an excellent pass.

Unfortunately last season was pretty much lost due to injury. Hopefully he can stay fit and regain the promise he showed.

Thanks for the response. I’ll be sure to monitor him this year to see how he’s bounced back from the injury

I already love him

I will be disappointed if Miyaichi doesn’t get a work permit. He has a passion to learn and gives his all, he’d be a great addition to our team!

I would pay to see Miyaichi eat nasri with noodles

Miyachi is very, VERY raw… but I do like what I see. I think he’ll suffer playing too early (as compared to Wilshere), but I really think he has “it”.

A lack of work permit is ridiculous. I work in China and I don’t play football for a professional team!

The work permit I think is to stop cheap young foreign players from potentially taking places away from young English players. Please can someone confirm this…..

If anyone is interested, Nacer Barazite just scored a hat-trick in Europa League Q.