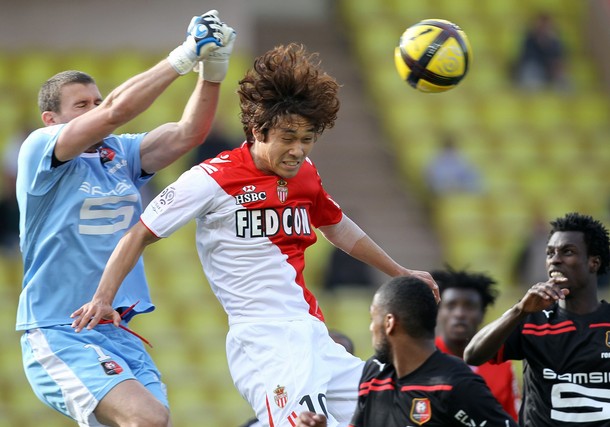 Arsenal have confirmed the signing of South Korean international Chu Park Young in a deal which is thought to be worth around £3.5 million.

Arsene Wenger had revealed in the aftermath of Sunday’s defeat at Old Trafford that the striker would be arriving from French side Monaco after press reports circled that the 26-year-old had called-off a medical with Lille.

Speaking about his move to the Emirates, Park, who has been given the number 9 shirt and prefers to go by the name ‘Ju’, stated:

“I am very honoured and I feel very happy to be at Arsenal. It is a dream to be here and I am really proud to be an Arsenal player. Now I just want to show how good I am and prove myself.

“In my opinion this is a great club, now I have to show what I can do on the pitch. I will do my best, I will never give up, I will show heart, I will give everything and I hope [the fans] will support me.”

Speaking about his latest acquisition, Wenger stressed that the captain of the South Korea national side would bring quality to his squad:

“We are delighted to have signed Chu. He will add true quality to our attacking forces and will be a valuable addition to the squad.”

Park’s place in the Arsenal squad looks likely to come at the expense of Nicklas Bendtner who is thought to be on the verge of a long-awaited exit. The Dane is strongly tipped to join Stoke City, although there has been no confirmation of an official approach.

can u tell me what is DEEEENCH?

…I’s just another way of saying bench, but with a ‘d’ instead of a ‘b’… bench means really good

According to Frimpster it’s means anything good.

It’s how to say “that’s good” if you are a retard.

He’s a Gunner now and has a lot of love for Arsenal so he’s got my full support!

Good buy and he can’t be too bad if the French champions wanted him. But this signing could be a stop gap though as he would have to do national service in a couple of years. But it is the hear and now that counts.

apparently he prefers to be called Ju and not Chu. Hence the JY Park on the shirt

If he makes 10 league starts I’ll be gobsmacked.

seems someone has faith in van persies ankles :p

Watch his video, he will play the Arshavin role on the wing. Can play creative mid as well. He scores goals but facilitates more.

fuck off one john hawley
Reply to  One John Hawley

CRY MORE!!! DOOOOM OH WOE IS ME DOOOOOOM ITS ALL OVER! DOOOOOOOOOOOOOOM

One John Hawley
Reply to  fuck off one john hawley

Not at all. Actually we are only one point worse off against the same teams as last season. Why do we have to fight amongst ourselves and react with fuck off and calling each other cnuts for not agreeing with something that has been said. I merely pointed out that if he was a reaplcement for Bendtner are we also going to play him out of position. If I can’t even make that comments well I let the rest of you get on with it.

Can someone confirm whether RVP and Theo have two years left on their contracts???

GM
Reply to  One John Hawley

As someone with no sources at Arsenal and no personal relationship with the players, agents or negotiating team involved I’m afraid cannot confirm whether this is the case, sorry.

Auslaender
Reply to  One John Hawley

Yes, they do. Which means that RVP will not be here next season. No way Arsene is going to offer a good last contract to a 29 yo with Robie’s injury history

Oh no arsenal gave him the cursed no.9 shirt!

So you noticed too, huh?

“I will do my best, I will never give up, I will show heart, I will give everything………” this I can’t argue with, am sure his work rate will be superb…I hope same ethos rub-on to a certain Russian fella!

RVP and Theo are both in the last year of their current contracts. Just wait for those two sagas to start in January.

No way shit lets get on the bus to Man City and fill Stan’s pockets with some more money !!!

Both players have 2 years on their contracts remaining. thus they should be looking to be re-signed in the next 12 months. However, if I was either player, I wouldn’t sign until I could be sure where the club was going.

I doubt Robin will re-sign. I wouldn’t if I was him.
But then again I’m not him am I.

For all of Arshavin’s talent, he will never help out his fullbacks and tack back, Ju will finally offer us that commitment for the full 90 minutes, and is technically very good, so is a great signing for us. Ju, and Ryo will offer us two extremely hard working wingers, our team needs that urgency and hunger to win the ball back instilled in them, defend from the front, and not stop til the final whistle.

To the tune of ‘much to much’ by the specials.

Amusing but essentially racist and insulting to a man who captains the nation it makes fun of. We’re not Northern.

I don’t think it’s racist to make light of a cultural difference. We don’t want to be too precious.

What do culture differences have to do with football?

It’s not racist, it’s simply a western misconception. I live in Korea, you can eat dog, but it’s pretty hard to come by, it’s actually illegal. As for the player, my Korean friends can’t believe he’s signed for us, apparently he’s a showboating twat. But then, two of my Korean friends support Bolton so what do they know!

Could be our Dirk Kuyt.

Can’t say I know him to well, but hope he does well! If he turns out anything like Park Ji Sung, it’ll be a smart buy.

exactly. if he’s anywhere near a battling, energetic and possitive as park its a top top buy for 3m. i’m sure theres a lot more business to come so i can enjoy this signing.

In an slightly unrelated matter … DEEEEEEEEEEEENCH!!!!!!!

sJ
Reply to  I Bleed Red

I’m to fill with to much joy at the face we have signed him. His record as a forward/striker in France isn’t great 25 goals in 90 odd games in 3 years, doesnt sound to prolific. But if he gives 100% in every game like Park (Man u) I’ll take him over Arshavin any day. I havent seen him play so I’ll reserve my judgement until then, but looking at his stats it looks like a cheap fix to our forward line that needs real quality.

* not filled with to much joy

I relish this signing, coz it’s exactly that, a signing!! But shouldn’t we be looking for midfielders to fill the massive gaps left by Fab and Na$ri!! Especially as the ones we have can’t keep fit for more than 5 seconds…. (yes I’m looking at you Diaby)?

Very good, I like the unexpected change of direction.

great, he is a really good player with a great workrate. I see him as playing just behind RVP or maybe wenger plays him out of position on the left instead of the lazy russian.

its a good signing guys…

per mertesacker would be fantastic addition to our defense, and if we can seal the deal of one or two more players we wont loose with six goals the next 100 years

“PARK, NOW, WHEREVER YOU MAY BE…

YOU EAT DOGS IN YOUR OWN COUNTRY..”

Not quite a second hand Citroen but definitely not a Mercedes Benz.

So when a game is not going our way and we need to throw on a game-changing forward to make the difference and grab a goal we are going to put on Juy? Where is he going to play Park? Up front and centre or by the swings?

Hmmm……is this the best that could be done with the funds available?

To the tune of candy statons young hearts –

Oh young park .. Runs free
He will never be a cunt … A cunt
Like nasri

To the tune of The Specials ‘too much too young’

I hope im wrong, but i have a bad feeling about this one………..

Let’s all get behind the lad

[…] Chu-Young, the South Korean captain was officially unveiled yesterday by the club, and given the no.9 shirt, which is historically jinxed […]