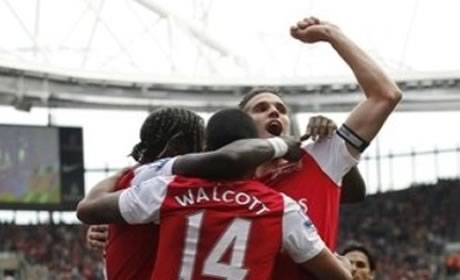 Arsenal won a game, and kept a clean sheet, and scored three goals, and probably should have scored more.

It was all about the second half, as the first was the dullest 45 minutes since time began. Apparently Bolton had a great early chance but my stream went kaput and I didn’t see it and my new outlook on stuff is if I didn’t see it, it didn’t happen.

Arsenal needed a good start to the second half and they got it. After just 38 seconds, Robin van Persie decided ‘I’m not taking this shit anymore, bitch’, took a pass from Ramsey, drove outside the defender and beat Jaaskelainen at his near post. 1-0 Arsenal

It got better for Arsenal then as Bolton had David Wheater sent off. Again it was a Ramsey pass that put Theo in behind, there was some vague contact from Wheater, Walcott fell over, ref gave Wheater a red card. I suppose, if you looked at it objectively, you might say it was harsh but this is an Arsenal site, so fuck them. It’s not as if they haven’t had it coming down the years, the Allardyce stained twatbastards.

Arsenal then began to fire shot after shot at Jaaskelainen who made some very good saves from Ramsey, Arteta and others.

In the 71st minute Arsenal went 2-0 up, again through van Persie. Ramsey played Walcott down the right hand side, he drove into the box, fired in a low cross and van Persie’s cheeky flicked finish was his 100th goal for the club.

The captain had been involved in some handbags with most of the Bolton team while the Arsenal players stood and watched and scoring again meant he was all like ‘Yeah, have that bitches’ and they were all like ‘Awwww’ and he was all like ‘Ahahahaha!’.

Arsenal should have had more. Walcott squandered two brilliant chances, one when he just had the keeper to beat but his shot was tame and easily saved.

It was left to Alex Song to make it 3-0. A Sagna pull back found its way to Song on the edge of the box, he went outside the defender and curled it into the top corner. A quality finish.

The only slight downside was the sight of Theo Walcott pulling up with what Wenger revealed was a sharp pain in his knee, but the main thing is that Arsenal won today.

Three delicious points, served with a side of three tangy goals, topped with a creamy clean sheet sauce.

I love happy match reports from Blogs. So much more comedy and wit.

And not only did we get 3 points we now don’t have the worst defence in the league either.

The mugs towards the end though singing “There’s only one Arsene Wenger…” tainted the day a little for me!
Silly sheep… Ignoring 6 months of lies & humilations for beating 10 men Bolton at home! Ohh dear!

legio
Reply to  The Noise

But it is true, there is only one Arsene Wenger… Unless someone cloned him of course.

The Red and White Observer
Reply to  The Noise

Only One
Reply to  The Noise

nuetral
Reply to  The Noise

I have to say that lots of times I am embarassed for Wenger with some of the things he comes up with at press conferences. It makes me squirm and I try not to watch him too much. I’m also bitter about the blatant bait and switch with regards to summer transfer activity and “only buy quality” line when the team is packed full of distinctly average players that Wenger bought. Anyway, I thought they looked great this afternoon, especially in the second half. Ramsey looked much better, good news what with Jack gone for likely more than half the… Read more »

Dave
Reply to  The Noise

The fans at the game singing “There’s only one Arsene Wenger…” demonstrates what a tiny minority the “Arsene Out” faction is. Get yourself a mirror if you want to know who the mugs are.

“Three delicious points, served with a side of three tangy goals, topped with a creamy clean sheet sauce”

Could not have put it any better.

Gotta admit that the ‘one Arsene Wenger’ chant was pretty irritating as well, but a win is a win and I will take it! Well done lads!!

Only One
Reply to  Good-Bloke

Couldnt have put it better

Arsenal 3-0 up and the fans singing “ONE ARSENE WENGER” is all couldI ever want from a home game.

I also liked the “We are staying up!” chants

great result, let’s hope they keep on coming. i was a bit disappointed that none of our players backed up robin when he was set upon by the drooling mob that is the bolton team, poor show lads. otherwise though, a good win and a damn relief.

The Red and White Observer
Reply to  THENRY

The Red and White Observer
Reply to  The Noise

The Noise
September 24, 2011 at 4:45 pm
Wow fella… you are top of your game tonight.
Just think what we’ve learnt from your input
Your reverence holds no bounds
I bow to you and your eloqent diatribe.

Last time I checked, I said ‘good win & much needed 3 points’… Sounds like I enjoyed the win there!

Kids… You really need to learn how to read before posting!

Well its a much needed win no doubt but we should not get too excited ,let the team put in a run and show their mettle ,we have a long way to go .

We are staying up chants fucking classic worth the entrance fee alone. Sides still aching.

All comments involving personal abuse have been removed

And seriously, grow the fuck up. We won, enjoy it.

Fuck me! We’ve just won by three goals and kept a clean sheet! I must be dreaming!

The noise u crazy yo you real you real crazy. WE WON. yeeeah boooy

Why are you fighting?! We won!

I was at the game today, and I sang “there’s only 1 arsene wenger” why wouldn’t you? You go to support the fucking team and the manager. I’m simply perplexed as to why you wouldn’t. I know the results have been bad, but you have to support the team.

Walcott – ‘Sharp pain in his knee…’ and with our injury luck it’ll be his cruciate and he’ll be out for the season!

Although personal abuse isn’t allowed, what about self abuse?

And I would like to Apologise to the noise for being a bit of a bellend.

I’m going to sound like a right bell end but what’s the deal with AKB? I’m guessing there is some undertone or slight that I’m missing. Blogs if you’d prefer to email me the answer that’s cool.

I just think that pigeon holing fans as one thing and one thing only, simply because they dare to have an opinion, is tedious and divisive and I won’t allow it here.

The reason none of the other players backed up RVP was because fighting would have started and Gervinho or Song would have been sent off. Good discipline in my opinion.

3 points and a clean sheet, nice one lads.

Nice one from the lads today…. RVP is a legend!
Oh, looking forward to when we whip out our Ox-Coq & pound defences…

Song for the night: “Happiness is a Warm Gun”

Love to see the ox released on spurs, something new that they can’t handle and he’s young and without fear hopefully. Have a feeling we Are going to need everything we can find against them next week. The ox may just give us an edge.

If you got to moan when we lose, why won’t you celebrate a good 3-0 plus 3 point win. I didn’t read any comment about how we lose to liverpool & man utd because of red card. So, why point out bolton red card as reason we win?

Loving 3 points for a change and of course the team should be supported. Only complaint I can make about the game is Arsene’s substitutions. I almost always think he is spot on, but I thought every sub today was a poor choice. Up 2-0, at home, against a really poor side reduced to 10 men, and we can’t give the Ox some valuable minutes where there would be no pressure? What about Park? Why do we need Arshavin in the last 15 minutes when we we could give the Ox more chance to bed into the squad instead? Why… Read more »

I think he bought on them players to possibly see if we could create and score more goals. Considering how bad our goal difference is at the moment and how we need to get into positive number as quickly as possible other than that i can’t think of any other explanation.

Yep, I think the substitutions were about consolidation and maybe getting another goal or two. We have to make the safe decisions at the moment

Because this Arsenal team has an amazing ability to implode at any time, and if that had happened people would be bemoaning the substitutions.

One day these bozo’s that slag wenger off will realise………………….

Bolton had one chance, and that was that. Was only going to be one winner.

I’m just curious when we are going to see Chu-Young? Our #9 can’t even make the bench!

A good win and some good beers. Ah…. life have its moments…

Couple of things: 1. Just watched Menu play Stoke and believe me, they didnt look so unbeatable to me. I think they escaped with a point there. And Stokes goal wasnt an own or offside goal. 2. We’ve had a string of bad results and even worst luck…against Blackburn, 2 own goals and an offside goal. We should really put things into perspective people; our team defended really well today and u can see that the defence line is gelling more. We’ve had almost a total change in personnel and in any organization it takes time for new ppl to… Read more »

what does AKB even stand for?