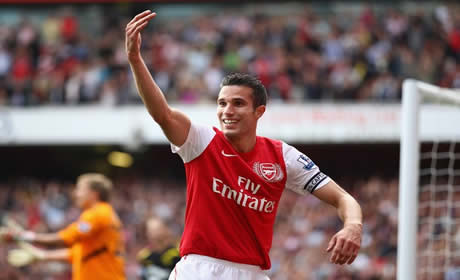 Arsene Wenger has hailed goalscoring hero Robin van Persie after his 99th and 100th strikes for the club today.

Arsenal had struggled in the first half against Bolton but van Persie provided the perfect start to the second period by slamming home the opening goal after just 38 seconds.

“It’s difficult to imagine our team without him at the moment, let’s touch wood and hope he remains with us in every single game”.

“I must say I observe him and he does very well. He’s not a big talker but he speaks his mind”

Robin revealed in the programme today that the players had a midweek dinner/bonding session and if the players need any better example set to them than scoring twice and taking on the entire Bolton back four in a flurry of verbals and pushing then I don’t know what it is.

stats via the mighty @Orbinho

MEANWHILE ELSEWHERE Giggs saw Lenny coming and shit himself.
hehehehehehe……..One inbred-maker was afraid of a inbred…

I loved watching Van Persie standing up to their players by himself.
Slightly worried/ dissapointed none of his team mates came to back him up – but it speaks volumes about his character- not in the thuggish crappy way but in the brave bossman fighter way!

Did you think that would have helped? Very sensible, no cards for Arsenal…

This guy is amazing! He should be up there with messi and ronaldo but the footballing God’s have been so unfair to him by cursing him with perma crockness. Hopefully he stays fit the whole season and proves me right that he should be considered amongst the best.

Come on, Arsenal, offer him whatever it takes to sign a new long term contract. He’s one of the few players we really cannot afford to lose.

And who was the creator? Boom! It’s Eboue!!

Felt so hopeless looking for answers to my qsuteinos…until now.

Thank GOD 4 rvp,lets pray GOD keeps him fit and in form for us to win trophies,n also pray GOD gves us the discipline needed 2 win trophies.AMEN

[…] that but let’s take nothing away from the achievement. Described after the game as ‘magic‘ by Arsene Wenger, he said: It makes me very proud, I’m number 17 in Arsenal’s history to […]

RVP legend well done on your 100 goals, hope he signs new contract, come on you gunners

Why Van Persie should be captain. | Being Arsenal FC Bystander

[…] mention should go to Van Persie, who the Boss lauded, and rightfully so. Our captain has now scored 100 goals for Arsenal,  and has to date scored 26 […]

[…] 100 was the obvious magic moment. But there were also lots more subtle things to take heart […]