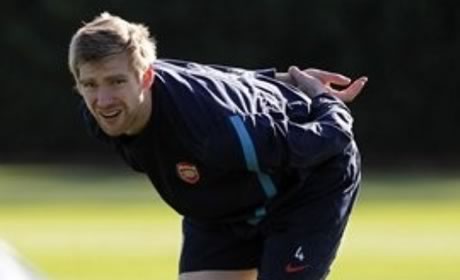 Ahead of the Carling Cup game against Bolton tonight, Arsenal’s Big Friendly German, Per Mertesacker, says it’s crucial that the team continues its progress in the Premier League.

The Gunners now lie 7th, with just four points fewer than they had at this stage last season, and after 14 consecutive seasons in the Champions League the big defender wants to ensure that becomes 15,

The table is very important for us now,” Mertesacker he said to Sky Sports News. “To be in the first four is kind of a target everybody has at this club. In the Champions League we want to go through. It’s a hard wait. I’m very confident and I think we’ll do this.”

And with so many games, the BFG says the new arrivals are having to learn on the job rather than the training ground.

“We have no time to do lots of work together but we have to use the games and work hard as a team. If we have no pre-season it’s a difficult situation but now I’ve had my pre-season and we are doing well.”

Another late arrival, Ju Young Park, is set to take part against Bolton tonight with his only previous appearance 71 minutes in the last round. But Arsene Wenger believes the slow start to his Arsenal career is normal and fans need to be a bit patient with the South Korean captain.

“Some people judged our players very quickly in a negative way and slowly they changed their mind through their performances”, he told Arsenal.com. “I prefer it that way round than the other. Some players make you jump off your seat in the early stages and then disappoint you after. These players will win over all the sceptical people and Park is one of them.

“What you need when you want to be successful at a club is three strikers, three central strikers. We have them and we are very happy with that”.

We all want champions league football.

If we don’t finish top four we bloody well just have to win the CL this year!

You know what wouldn’t be bad? We come 5th, Sp*rs come 4th. However, we win the champions league, an thus deprive them of the final spot. No country can have more than four Champions League places, an the winner gets to defend their title.

That would be slightly delicious, I’d also settle for just comming 4th anyway but you know, swings, roundabouts.

I’d give anything to finish ahead of Sp*rs! Can’t wait for St. Totteringham day!! 😀

We will win the Champions League.
We are the Arsenal!!

Thats what I thought BFG meant

No one is judging J Y Park.. We’ve just not seen enough of him. Well, if he’s sharp in training and hardworking like the Boss says then it’s a good thing! COYG!

Alan Davies and Ian Stone were ripping into him in their podcast a couple of weeks ago. It was horrible, horrible listening. Actually that was the first time I listened to it and it put me off listening to it again. There were three of them (i don’t know who the other guy was) all talking over each other at the same time, all trying to be funny, and it just left me feeling like my head was going to explode. It’s a shame as I quite like the guys on an individual basis. They did really lay into Clive… Read more »

TBF, during the Shrewsbury game, Park played, and appeared unable to trap the ball, since then he hasn’t played.

Anyway, The Tuesday Club is class, Davies himself can get fucking annoying at times but mostly he’s alright and the rest of them are genuinley passionate, pretty funny, proper, gooners.

Well, I think it’s not uncommon that a player might be nervous on his debut and mis-control the ball. One game doesn’t mean he’s shit.
By your glowing review of the Tuesday Club maybe I just caught a bad one that time then. Should I give Jonathan Creek a second chance?

Good to know that pre-season (and learning on the job) is finally over. Now to challenging for the title and champions league (and, of course, finishing above Sp*rs). COYG!

Good to know that pre-season (and learning on the job) is finally over. Now to challenging for the title and the champions league (and, of course, finishing above Sp*rs). COYG!

7 goals in the last 2 months for his country. Some great passing plays too (youtube the Lebanon, Poland, Kuwait and UAE games).

Not to mention a winning goal in the cup last night! He shoots, he scores, he eats labradors park chu young! But in all seriousness some people doubted mertersacker and tore into wenger for not buying Gary Cahill. I know at the start I was skeptical about his pace, but look where Bolton have ended up! Relegation scrap.. In arsene we trust.

Would love to see an attack that ended with Park trapping the ball between his knees while BFG picks him up by the head and throws him into the goal.

Many people think (including Wenger) that the EPL title is beyond us; however, personally, i feel there are interesting turns and twists ahead that will give us an outside chance to be competing for the title – remember, last year? It was MU for a while, then it was The Arsenal, then Chelsea but then MC edged past us. Even Alex declared that the title race was between The Arsenal and MU, but we ended up fourth!! I think there is a lot more left before the climax and I fancy that The Arsenal will have a chance at the… Read more »

I agree. We are pulling out of our tailspin, no doubt about it. 4 weeks ago, the thought of playing the rent boys at the Bridge would have filled me with terror. Not now – we can win that game. Or at least get something out of it. Meantime, ManU – without their best player, Howard Webb – looked piss poor against Citeh last week,. Big spending Liverpool have greatly improved from being abject to being…average at best, whatever the cheerleaders on the MOTD sofa say. And Sp**s, at their very best, barely scraped past us at pretty close to… Read more »

[…] other news, RVP is encouraged by Gervinho’s performance, and Mertesacker is in the mood to fight for 4th spot. Frankly, other than relishing the 2-1 victory which sees us one step closer to the mickey […]