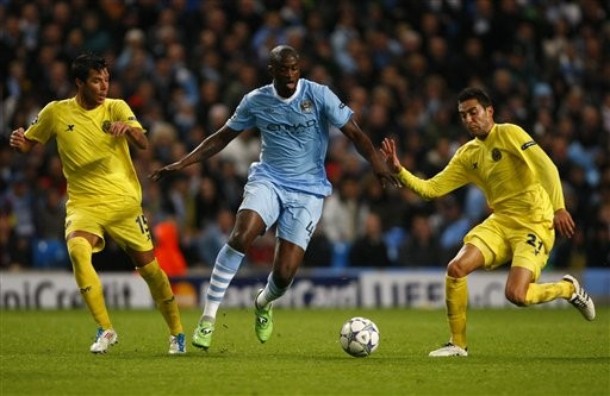 You know that giant, hulking, box-to-box midfielder we’ve all been longing for since Patrick Vieira left in 2005?

Well…whisper it quietly, but Arsene thinks he has found one in the Academy. OK, so he’s not said he’s like Paddy, but rather Yaya Toure who we once had on trial, couldn’t get a work permit for and then watched move around Europe for mega-bucks. But that’s not a bad comparison in the eyes of Arseblog News.

The young man in question you ask? His name ladies and gentlemen, is Chuks Aneke. Write it down, get it printed on a shirt, scream it at your neighbour. Just make sure you remember it.

Speaking to Arsenal Player about the 18-year-old, who made his debut in the dying minutes of the win over Shrewsbury, Wenger boldly asserted: “Chuks is a bit like Yaya Toure – he has body power and good technique.

“We had Yaya here [on trial] and for me Chuks is a bit similar because he can play behind the striker or in a deeper role as well. We will have to see where he will develop, it is not excluded that in the future he will play deeper in midfield.”

So there we go, plenty to get excited about. Let’s hope he’s not a donkey.

Of course, one new(ish) name to make an impact already this season has been Francis Coquelin. The French midfielder spent last season on loan with Lorient and having made his debut two years ago as a right-back has settled as an all-action midfielder.

Talking about the transformation, Wenger noted: “He is more a player who likes to cover ground than a player who starts from the back in a tactical position.

“He likes to be involved at the heart of things. A player’s position has to suit his personality. When that is not the case, in the long-term you have no chance.

“I always thought he would be a player for Arsenal Football Club but he is a little bit in the situation of Jack Wilshere last year – the loan out to a top division club has done him good confidence-wise.

“He has transferred that into our first team now. He was good at the [Under-19] World Cup with France, and he is moving on well and improving.”

Both Coquelin and Aneke are expected to play some part in tonight’s match with Bolton Wanderers at the Emirates.

Double A battery, staying up till this hour to post. Fair play to you.

I think he has a name for the ages: Chuks Aneke. That’s just a pleasure to say. Even if he fails to live up to billing on the pitch, he will out-do the fantabulously names Yaya Toure. Much better than those hard to pronounce names like Aguero (that’s one mouth twist away from a sprained tongue), or Van der Vaart (say it quickly, “vamvervar”), Agbolahor (Agbola-ouch), Sheringham (spit three times). Must say, I’m really looking forward to the Bolton match now – seems like there is far less stress involved, and so we get to see the potentials (Chuks, Ox,… Read more »

the game’s not televised.

Fear not, there must be some stream out there somewhere…we shall find it!

Tickets are still on general sale, just go!! people should stop streaming, the ground looks to be half empty tonight.

the only sam is nelson
Reply to  Frog

[…] be a place for the highly regarded youngster Chuks Aneke. I assume when the manager goes on record comparing a player to Yaya Toure he’s talking about the good side of Kolo’s brother and isn’t planning on sending […]

Game is not televised but there are plenty of tickets left. Come and make some noise to show the sniping media that we support our team through thick and thin.

Nun Chucks Aneke will roundhouse kick us to glory

Carling Cup… serious?? Suck my bat AW… it will be a great chance to see these new fella’s though…. remind me again why didnt sign Yaya??

TomC
Reply to  Vox in Oz

[…] However, Arsene has also given hint that Aneke might start or feature some time in the match, and hyped up the youngster as being a bit like Yaya […]

So 10 times better than DD then.