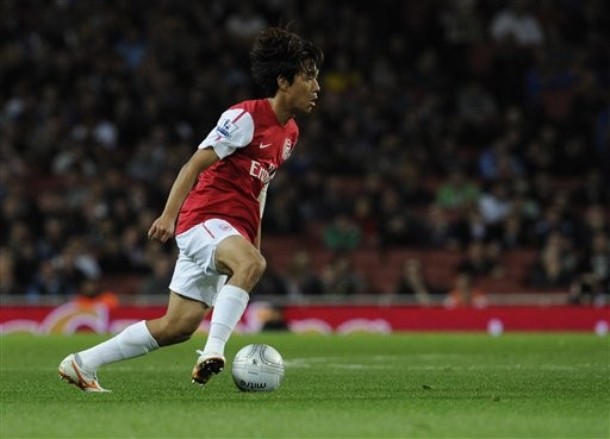 Arsene Wenger insists that Ju Young Park will be a hit at the Emirates and has urged people to judge the player after he has had a chance to prove his worth in the first team.

Citing the initially slow starts made by Thierry Henry and Robert Pires *swoon on behalf of Arseblogger* at Highbury, the French coach maintains that his Korean import will prove vital later in the season with all top clubs needing at least three top strikers.

Speaking to Arsenal Player, Wenger defended his treatment of the former Monaco man on the eve of a likely start against Bolton Wanderers in the Carling Cup.

“Some people judged our players very quickly in a negative way and slowly they changed their mind through their performances. I prefer it that way round than the other. Some players make you jump off your seat in the early stages and then disappoint you after. These players will win over all the sceptical people and Park is one of them.

“I have been impressed by his intelligence and his attitude. He is well-appreciated and rated by his team-mates and by the staff as well – we think he is a quality player.

“What you need when you want to be successful at a club is three strikers, three central strikers. We have them* and we are very happy with that.”

*The cameraman failed to pick up Wenger’s crossed-fingers and little wink at the interviewer.

Ok, I’ll go first, and state the obvious: No, we’ve not been disappointed in him – we just haven’t seen him yet. Put him on the pitch and then we can see if we are disappointed or not.

It does seem odd to save him for the latter part of the season. Does football work like that? I don’t think you can just drop Park into the striker’s role mid-season and expect him to score goals. Anyway, hopefully we’ll get our first serious look at the lad against Bolton on Tuesday.

For what it’s worth, I like the look of him based on his youtube videos that are out there. He reminds me of a young Henry. However, what’s the point of buying a striker that will take 6 months to get up to speed when he can only play for us for 2 years before heading off to be in the military for his country? As far as “having 3 strikers” goes: Chamakh is currently worthless, he wouldn’t make it with a championship team at this moment in time and Wenger seems terrified to give Ju his chance with the… Read more »

Can we lay off slagging Chamakh please? The guy is having a rough enough time of it as it is, and I am pretty certain that no-one is more aware of it than MC himself.

I say give the guy a break. Better still, support him. We know he has the quality, we have seen it first hand. Maybe Gooners should try help him get it back. I don’t think slagging him off on our own forums helps.

He’s a professional footballer. It’s part and parcel of the job mate. And to be clear, I never said I hated him and wouldn’t support him, simply commenting on his current form. Something like 1 or 2 goals in the last calendar year? That’s pathetic. That wouldn’t even be OK in my intramural league…It’s one thing to be out of form, but to be out of form that long without any kind of injury naturally gets people wondering if he’s truly of the quality we thought. The same discussions people are still having about Torres. Just sayin’… But I hope… Read more »

You know when we get raped by injuries we will see Park. Quite soon then I imagine : O

Ya I’m really glad we bought this guy park instead of a proven goal machine like falcao or benzema or ( insert name of striker) rumored to be arsenal bound. We need a proper centre forward in jan.

Or Fabrigas – I hear he has got Arsenal DNA

I remember the boss telling us a certain Eduardo was soon gonna take the league by storm – before his career was ended by a twat called Martin Taylor. Park’ll need some protection when he becomes the world best striker – behind RvP though

The year Eduardo got his leg / Arsenal career shattered he was virtually unplayable. He led the stats for the most fouled player. We were on our way to being run-away EPL champions. and he was on his way to being crowned player of the year. I still find myself weeping every time I think of what happened to Eduardo and the Arsenal. That was for the the moment when fear entered our game and that brilliant young team never quite recovered from the trauma. When a player starts to believe that the authorities will allow players to break their… Read more »

@ GoonerTerry: CORRECTION – ” * that was for me the moment that fear entered our game…

Yeah… I totally agree. Am really upset now. Is that when we had Flaminigas in the middle? Wow.

Hope he doesn’t take as long as Amaury Bischoff did. This guy goes back to Korea to join the military soon so it’s not like there’s a lot of time.

Who is this Bischoff fella, and why bring hm up now?

If Korea win a medal at the London olympics or his national team win something else major , then he won’t have to fulfill his military duties. That is why Park Ji Sung is still playing for Man Ure, the Korea team in 2002 got to the 1/4 or semi finals.

It’s not 100% certain that that will happen, just because it happened once 9 years ago doesn’t mean the govt will do it again.

Besides, they would have to do something outstanding to compare with reaching the semis of a WC.

this guy is crap. can’t remeber even on good performance for us. We shud buy aguero!

He’s only had one performance, and you probably didn’t watch it.
He wasn’t amazing but not many players are immediately for a new club in a new league. Give the guy a chance. He’s captain of South Korea and they’re not bad, so he can’t be.
Remember, we play with a great intensity, pace and stamina, more so than most if not every team in the league so that’s quite something to adjust to.
Though I’m sure, if you went straight into the Arsenal first team you’d be automatically brilliant, wouldn’t you?

[…] against Shrewsbury. Despite the manager’s obvious reluctance to use him since he says the South Korean captain will come good: Some players like Pires and Henry took four, five, six months and they became exceptional players. […]

Park is quality no doubt and none of the Arsenal supporters have had anything negative to say about him, we just want to see him play. A cameo appearance in one Carling cup game and that’s it so far. Hopefully today he’ll have a long spell on the pitch and show his worth. Right now I’d have him on instead of the bad haircut known as Chamakh any day. How many easy chances at goal does he need to score? That header he flubbed in the first half Sunday was horrible.

[…] front, Oxlade-Chamberlain should start, as should Park and Chamakh. Arsene has explained why Park hasn’t started at all recently, but says that Park needs time to adapt to the game. Frankly, how is he going to do […]

This Park guy will prove a few people wrong… can’t believe some of you guys are writing him of fbefore we get a proper look at him!?!

Get in there son ! That is all.

HE SCORED! YAY It was very nice too.

I knew he was real!

i know its his goal wasnt the hardest of all goals but he looked more convincing than chamakh and theo in front of goal. i think wenger needs to play chu young more than chamakh.

To Manu:
Our Park is better than yours.

I have played PES since the early days.

I have signed Park for Arsenal before, while his name was still C. Y. Park, and he scores 35 a season.

I HAVE COMPLETE AND UTTER FAITH IN PARK.