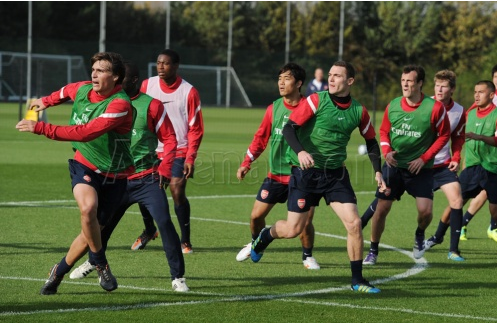 The Belgian international has not featured for the Gunners since the second leg Champions League qualification game with Udinese exactly two months ago, but now appears on the cusp of a return to action.

Vermaelen underwent a small surgical procedure on his right Achilles at the beginning of September with a view to rectifying an issue which had troubled his left foot for much of the season before. The Belgian was restricted to just five appearances between August 2010 and May 2011 and has appeared only three times this term.

It remains to be seen whether the centre-back will be selected as part of the Gunners’ rotated squad for the visit of the Trotters, although with Per Mertesacker and Laurent Koscielny likely to be rested ahead of Saturday’s showdown with Chelsea there is a chance he could be included on the bench. Sebastien Squillaci (remember him?) and Ignasi ‘the hair’ Miquel are the other options available for selection.

TV5 seems pleased with his participation today. Here’s what he had to say on Twitter: “It s good to be out training with the boys again!”

Vermaelen: I have great memories of Arsenal

*squeal* Tommy returns! Things are looking up guys! We’ll be back in the top four in no time!

Be nice to give him 30 minutes or so tomorrow if he’s up to it.

i see sebastian englehart also trained with the team (in the pic). which only means that our best cb is close to return as well.

haha, had forgotten that

Get rid of Squillaci and Djorou in January and buy a good 4th defender. Then rotate between 4 good defenders we have and we shall have less injuries.

Stop being so negative. These are Arsenal Players and we need them all. They have had good games when played with the right combination. Remember Squalichi scored a great winner last seasonfor us. So lay off the players. Support our team bench and all. COYG.

Eeeeer. we had four CB last season. Didn’t quite figure out how we’d wanted it to. I reckon 5’s the amount you want. 2 to be your settled pair, 1 to knock on the door and keep them on their toes and also provide cover along the back four, the other two for emergencies and development.

Hopefully all should be rotated. Bloody difficult to pull off though

i think is a great boost to the arsenal squad… indeed..
so keep it up VAMELEAN… we really love you…
and try to play against CHELSEA……

Chelsea match is on Saturday, not Sunday..

Agree that we need to offload squillaci and djourou n buy a good fourth defender. We also need to buy a serious first team attacking option like goetze or hazard or even mvilla

Never thought I’d say it, but maybe there’s not so much of a need to rush him back with Mert and Kos playing as well as they are. Gently does it to make sure he’s fully fit.

No get him back to smash cashly cole and the racist terry up in one fucking tackle, the verminater

I like the idea of that, but if that doesn’t sound like a damn good Frimponging, I don’t know what is.

funny how the glazerhawks are now the club in crisis

and i did rather piss myself to see demento, who had previously patronised wenger to within an inch of his life after that game that never actually happened, using the exact same excuse wenger did: that they carried on attacking after going down to 10 men, when they should have just sat on taking a beating. the exact. same. wording.

Great news! I hope the Boss will remember a certain number 9 in his squad tomorow.
PS. Piers Morgan’s Twitter digs at the Manure players have been keeping me entartained All Day!! Lol! COYG!!!!

Piers Morgan is a twat.

Piers Morgan is a mega cunt. I didn’t hear him being very supportive o the arsenal 7 weeks ago.

Yeah! Vermination!!!
Kudos to Koscielny and Mertesacker though. They are starting to look very good together now.
This season is getting better. Don’t want to say that corner is turned just yet, but very pleased with the progress. We’re starting to look more of a team again.

If the corner isn’t turned, we are at least on the roundabout of recovery. 😉 Think its great that we’ll have all three of them fit, between now and the new year, games are going to be coming thick and fast – it can only be good for us.

I agree with the sentiment that Kos and Mert are forming a formidable partnership, and perhaps should not be broken up too quickly. But competition for places is the life blood of a championship team (or at least one with aspirations for the championship). Verminator’s return is nothing short of brilliant, and the sooner he gets himself into the rotation proper, the sooner we turn that illusive corner Blogs is so reluctant to talk about. We forget what an absolute fucking killer he is – he just takes no prisoners. I can’t wait until he is back to his best… Read more »

As age as I’m concerned, he has to battle it out with per for second choice at centre half. I think it’s become quite clear lately that koscielny Is our top dog in the middle. Kudos to him, he’s taken a ton of shit from gooners over the past year or so and he deserves to be where he is.

@ Frog: not so simple to say that Per is vying for the support CB role with Tommy and that Kos is the top-dog. No question Kos is playing very well this season but don’t you believe that it is because he has a reliable partner in Mert beside him? I believe that it is Mert who is the unsung hero in the back four…he settles everyone around him; never wanders out of position and so provides the platform for Kos to perform his Terminator role so effectively. Kos is definitely our best man-marker and tackler and needs a partner… Read more »

I agree with what your saying but you also have to take into account that kiss has had a shut partner for most of his arsenal career up till mert. I mean who wouldn’t look like shit playing with the squid or dj as your partner? I like tv5 and feel he’s a good defender. I also think that the most important part of a central pairin is consistency, and with that said, I’m not sold on vermaelins injury record and I’m not confident he can put together a string of 12 matches on the skid. Koss and meet are… Read more »

Frog. Clearly you missed the Liverpool game. Verminator made Carrol look like a 36mil donkey. Haven’t seen such a dominating performance at the back since the good old days of Adams and Keown. The Kos/Per partnership is bearing some fruit, no doubt about it, but Vermaelen is first choice centre back by a long way. Not only that but everyone is missing two very important points: 1. He’s the vice fucking captain. And future Captain if RvP isn’t fit or (god forbid) leaves.. We need his leadership on the field. Neither Kos or Per have that (yet). 2. He is… Read more »

Vermaelen is the kind of guy you go to war behind, no questions asked. Mert and Kos are doing extremely well, but get TV5 back. We are playing every 3 days

We need him back to take the scoring load off of VP’s shoulders. Pretty sure he was leading our team in scoring for a while when he first joined arsenal

Interesting to see the line of defenders in the green bibs!!

Possible back four for Bolton?

I’ll be there supporting the boys. Here’s hoping for more wins and more home draws, these are the only games I can afford right now!

Exactly my thoughts. Isn’t the world of football crazy? Two months ago, we would’ve asked for him-bandaged and all. Good times are here again!

there is no need to rush him back; let’s make absolutly sure he’s fine.

Haha pics 4,5,6 it looks like our imperious leader is auditioning for the ministry of silly walks !

How on earth is that trolling ? It does look like he is doing that in those pics to be fair,..perhaps you arn’t aware of what the ministry of silly walks is; an old Monty Python sketch. Bloody hell if you think thats trolling, the whole job lot of us should all pack our bags and hang out under bridges as of this minute !

My bad – forgot about the MP skit. That makes the comment far less trollish, IMHO. Apologies to Bromley.

What about abu diaby we didnt heard anything about him.

[…] The squad announced for today’s match sees a good mixture of experience and raw talents. Vermaelen has return from injury, whereas Diaby still misses out. Squad is as […]

with the way kos and BFG are playing, he is going to have to be in top form to take his spot back! we have the competition in the back that we needed boys! now lets keep it game by game! and hopefully keep the W streak