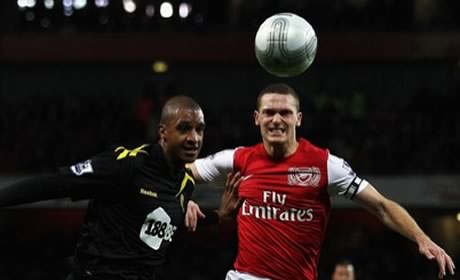 Arsenal fans will have been happy to see Thomas Vermaelen return to competitive action last night in the 2-1 win over Bolton.

The steely-eyed Belgian hadn’t played since the 24th of August, when the Gunners beat Udinese 2-1, but Vermaelen says that being out injured for a long period is no excuse for taking time to find your feet again.

“Personally I don’t believe in that”, he told Arsenal Player. “If I have an injury for a long time I don’t believe in coming back and getting rhythm. I think it’s just in your head, it’s just a mental thing. If you’re a footballer player, if you’re a pro, you have be there straight away, and that’s why I wanted to play today”.

Vermaelen left the field with a few minutes to go which led to some speculation he was injured again, but he played down fears, revealing it was merely cramp. And after the game he was buoyed by his return and Arsenal’s win over the Trotters.

“I feel great. I trained yesterday for the first time with team and felt good straight away so I was confident for today. It was a good game for us, we fought hard, it was a great result, and a deserved result”.

Vermaelen will be in the squad for Saturday’s crunch Premier League game against Chelsea whose captain isn’t racist at all.

He’s a double hard bastard, that boy. No question.

“Vermaelen will be in the squad for Saturday’s crunch Premier League game against Chelsea whose captain isn’t racist at all.”

That made me laugh a bit to loudly at work! Whoops!

Grit, passion, a sense of responsibility to the team and club, steely eyes a rapier shot and a no nonense attitude.., in my next life I want to come back as a Thomas Vermaelen.

Neither he is sleeping with his team mates wives, is he???

The world is a much much better place with Thomas Vermaelen back playing.

If John Terry used my toilet, I would burn my house down in an attempt at disease containment. Skank.

That’s a bit too strong dave, don’t you think so? Anyway, I see your point.

How is the chance he might have used the toilet facility at the Gove?

Euro sport is reporting him as injured anyone know If this is true??

calf strain. sort of. he came off as a precaution as it was feeling tight.

[…] the game against Chelsea, than to lose our best defender for another long time. The Belgian has expressed his delight in making a good comeback, and so are […]

Used to think he would’ve been a better choice for captain than Robin. But with the latter’s performances recently I’m no longer sure. However, that Verminator is a great leader is obviously very clear, even a blind man can see that – and he’s been busy proving that lately by 1.) committing his future to us, and 2.) putting in a great performance last night for someone who have away for a such a long time.

Used to think he would’ve been a better choice for captain than Robin. But with the latter’s performances recently I’m no longer sure. However, that Verminator is a great leader is obviously very clear, even a blind man can see that – and he’s been busy proving that lately by 1.) committing his future to us, and
2.) putting in a great performance last night for someone who have away for a such a long time.

He has a great attitude, hopefully he can stay fit now as he adds a lot to the team.
We are still a couple of players and a few yards of confidence short but things are far brighter recently than a month ago. TV back is a boost. A result against Chelsea will help even more

Tommy V has MENTAL STRENGTH and every other kind of strength. Glad he’s back in action for the team. I’d like to see our back line include our three best CB’s against Chels to avoid this problem of having to choose which one to leave out.

I heard TV5 and Chuck Norris had a disagreement……..

That made me chuckle

Blogs,it’s obvious that the first sentence needs some straightening. It’s as coordinated as man u’s defence against city.

Padwoir, I would want to come back as Dennis. All day long I would be scoring goals from the edge of the penalty box curling the ball in around the goal keepers just for fun. I bet Seaman must have hated training against him yet alone all the other keepers in the Premiership that had to face that majestic boot.

Nun Chuks Aneke, TV and Chuck Norris – we’re the fucking ninjas mark my word. Just give Arshavin some of those death tipped death star death things to fling at non-xenophobic Terry and we’re away

Can we make diaby available to play for the first ten minutes just to give him another chance to kick that twat Terry squat in the mug AGAIN?

Tommy V is the new Tony A….so good to have TV back in the team. Along with little jack he is the most important team member that has been missing.