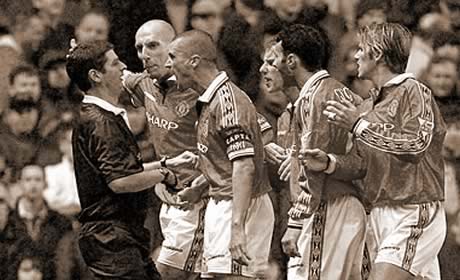 Arsene Wenger has, effectively, accused the FA of caving in like a pack of scared fainting goats when it comes to tackling dissent in the modern game.

Arseblog News seems to remember an edict which suggested that only the captain of a team was allowed to speak to a referee once a decision has been made but clearly this has not been the case as players continue to harangue officials at all times.

The Arsenal manager reckons a zero tolerance approach is needed if things are to get better. “Once you go that way you accept everything, or you go to zero tolerance,” he said.

“The players will always adapt. They know that when they are punished, when they do it, they will shut up. If you say at the start of the season you cannot talk to the referee but once a player abuses a referee and it is not punished, it is finished.”

Many people compare football and rugby in this regard. When a rugby official makes his decision it’s very rare for him to be surrounded by the entire team against whom the decision has been made whilst they shout at him, veins in their necks and heads bulging, whilst covering him in spittle.

Yet this is common place in football despite the fact that a referee has yet to ever change his mind in the face of this shouting. ‘What’s that you say. It’s NOT a pelanty? Oh, ok then!’.

We’ve seen football try and introduce a system where backchat meant the referee could move a free kick 10 yards forward but that failed miserably and is no longer seen, and such is the culture of the game that it’s Arsene Wenger’s belief that players will adapt is slightly optimistic. Of course they will, in time, but it’ll take much longer than people might think. The cry of ‘referee!’, followed by a range of creative expletives, when a decision goes against a player is so ingrained in the game that it could take a generation to wipe it out.

Interestingly, there has been some talk of introducing sin-bins to football which might speed up the process should the authorities decide that dissent has to be stopped. A player talking back to the referee in an inappropriate manner could be sent for 5 or 10 minutes to the sin-bin and if players didn’t learn pretty quickly then you’d have to think they’re even more thick than we already think they are.

However, all this is based on the assumption that they genuinely want to do something about the problem. It’s not as if any of these suggestions are new or radical in any way, they’re just common sense and could have been applied at any time in the last 50 years.

So, sorry refs, it looks like you’re going to be covered in spittle for a little while longer.

* we just liked the title, it has no bearing on the actual post itself though.

pelanty of penalties these days

Looks like Man U(re) to me. In the photo that is.

Going by the title of the post, perhaps a pic of Sian Massey would have been good, can’t speak as to her scent (though I’m sure its a good degree finer than either Mark Clattenberg or Mike Dean), but I’m sure she gets her fair share of dissent – well if your factor in Kevin McNaughton, I’m sure she gets her fair share of being smashed flat too. I think the sin bin idea has got potential, but it would have to be seriously though through, as it could open up a whole pandoras box of potentially idiotic decisions from… Read more »

Please refer to the sacred animals properly as myoclonic goats. The world’s collective intelligence thanks you.

Took some time to figure out the pun in the title…
I think “In-Dissent Proposal” would have stayed to actual post..

Why not just give everybody, except the captain, a yellow card for speaking (too aggressively) to the referee? I guess they’d learn it pretty quickly