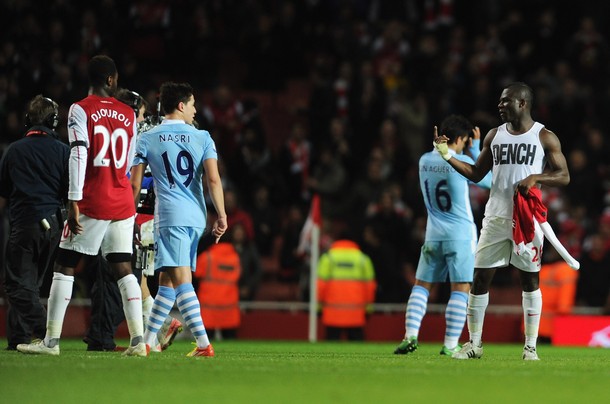 Emmanuel Frimpong admits that he could go out on loan in January if regular first team minutes are not forthcoming by January.

The Ghanaian-born midfield enforcer has been a significant squad member this season, starting games in the Carling Cup, Premier League and Champions League. However, acknowledging that Alex Song, Mikel Arteta and Aaron Ramsey are the current first choice midfield trio, and that Jack Wilshere is still to return from injury, the 19-year-old recognises a need to play in order to improve.

“Obviously I had a decent start to the season but when players like Alex Song are back, along with Mikel Arteta and Aaron Ramsey, it’s normal that they’ll play because they’re more senior than I am.

“Aaron and Alex had to wait for their chances in the past and that’s what happens in football – you have to be patient and can’t expect to be thrown straight in. You need to keep learning and hope that, when your chance comes, everything goes well.

“At the moment it’s hard for me to get into the team, no doubt about that.

“When you aren’t playing, the obvious choice is to go out for a little while and try to get some game time. When January comes we’ll see – you never know how things will go, so we’ll look at it then.”

One quality Frimpong has made clear he won’t be changing, despite aiming to develop his game, is his tenacity in the centre of the park. Learning from his red card against Liverpool, the youngster stressed he still enjoys being the hard man.

“Mistime one or two [challenges] and you run the risk of getting sent off, so I’ve learned from that and know I need to work on making the right challenges at the right times. But I’m still improving.

“It’s important that when I do play, I bring that aggression to the side – Arsenal aren’t necessarily known for that, so I’m happy that when I play I can bring something a little bit different to what we do.”

That ‘aggression’ is exactly what Samir Nasri experienced last night on his return to the Emirates. From the outset the little money-grabbing turdlet found his path blocked by Frimpong and was so completely nullified that he attempted to leave the field of play as a sub despite his number not being shown.

Arseblog News keeps it’s collective fingers crossed that The Frimster can maintain his development and become a long-term member of Arsene Wenger’s plans.

I wouldn’t mind seeing Frimpong go on loan to a team like Bolton or West Brom for the rest of the season. In my mind, Coquelin is ahead of him and can fill in for Song when need be. The only problem is if Song and Coquelin get injured then we will need Frimpong because Diaby will also most likely be injured at that point in time.

Please not Bolton after what happened with their chairman this summer. send him to a team that close to us we can monitor like QPR or Fulham.

Ehhh, it worked for Jack. Lets definatley not send him to QPR to play under Colin Wanker and with Barton, an I’m not sure he’d get the minutes at Fulham, they’re a pretty tight unit.

Obviously a Prem side would be best, but a good championship side wouldn’t go amiss either, like the lad says, game time will count.

How about Everton? They need players and Moyes is a pretty good manager

SWANSEA!!!! they too play sexy football

Being from Swansea, I would love to see Frimpong play for the Swans. They play good football and are desperate for a bite in midfield, sounds perfect to me. I will even offer him free acommodation!

I would like to see him at Norwich or QPR not one of those horrible northern clubs.

Will he get alot of gametime in QPR?

Dont follow them very much, but I doubt they will sideline Barton to make room for Frimmy. How do they play in midfield?

Oh true I forgot about the scrotum with a hitler haircut.

northerngoon
Click to flag and open «Comment Reporting» form. You can choose reporting category and send message to website administrator. Admins may or may not choose to remove the comment or block the author. And please don't worry, your report will be anonymous.

Watch it son lol what’s wrong with the north?

West ham would be good for him, I’ve been going to some of their games this season and sInce they lost Parker they have needed someone like frimpong, he can develop with lansbury. It would also give him vital game time in a extremly competitive championship season.

isnt it better if he could go to a PL-team?
He is definitly good enough.

West ham is a pl team, they have pl players, for instance Nolan, cole, green, noble, and a pl manager. As much as he is a big prick Sam allerdyce is one of the best people to teach him to hone his aggression in the right areas

Didn’t do Jack any harm going to a dirty Northern team, and I’ve got this theory it helped de-mystify their horribleness for us.

No chance he could go to Citeh on loan and make Nasri’s life a waking hell? Every minute. Of every fuckin day.

I say send him to Stoke as a secret agent. He could clog Shawcross in training and nit even get banned.

I do think sending him to a grotty northern club away from his friends would focus him more and make him really see how fortunate he is to be at The Arsenal.

On yesterdays performances, the Frimster and coquelin look to have big futures ahead.

He should go to a Championship side like Forest for a couple of months.

I think it should be to a team that play good football but still have an edge; with managers who can teach him to harness his natural aggression e.g Norwich, QPR, Fulham or West Ham, so that when he comes back he will be DEEEEEENCH…!!!

I bet yr Frogs mate with a name like that! 🙂

That last paragraph is ace.

with song off to the africa cup of nations I think he’ll be needed in our midfield Jan + Feb.

Gutbukkit Deffrolla
Click to flag and open «Comment Reporting» form. You can choose reporting category and send message to website administrator. Admins may or may not choose to remove the comment or block the author. And please don't worry, your report will be anonymous.

There is a small group of people here who aren’t getting that message.

We have had “When Song is away at the ACN….” every third news item for the last 3 months.

I think it is a reflection of the lowering quality of our education system that people aren’t aware that there are countries actually inside Africa….. just like there are in London 🙂

Arsenal 0-1 Man City | Good display, pity about the loss and Frimster’s shirt. | Being Arsenal FC Bystander
Click to flag and open «Comment Reporting» form. You can choose reporting category and send message to website administrator. Admins may or may not choose to remove the comment or block the author. And please don't worry, your report will be anonymous.

[…] He hassled, and bossed the midfield like a, like a boss! If rumours about him going out in January on loan are true, then I say we can prepare to see the Frimster challenging for a first team spot next […]

Qpr are u guys kiddin me ? You want frimster to play alongside barton(CUNT). They cudnt even trash 9 man chelsea. Norwich and Swansea are better options.

Does anyone know what’s happening with Ghana? I’d say African cup of nations would do him just as good as going out on loan.

david seago
Click to flag and open «Comment Reporting» form. You can choose reporting category and send message to website administrator. Admins may or may not choose to remove the comment or block the author. And please don't worry, your report will be anonymous.

he isn’t in the Ghana squad at the moment.

‘That ‘aggression’ is exactly what Samir
Nasri experienced last night on his
return to the Emirates. From the outset
the little money-grabbing turdlet
found his path blocked by Frimpong
and was so completely nullified that he
attempted to leave the field of play as
a sub despite his number not being
shown.’
lolololol.
Classic!

How about Sunderland? Looks like O’Neill will get the job and he’s a man who can teach players a thing or two.

Of course he’d have to keep the urge to point at Bendtner and laugh under control.

Fash
Click to flag and open «Comment Reporting» form. You can choose reporting category and send message to website administrator. Admins may or may not choose to remove the comment or block the author. And please don't worry, your report will be anonymous.

Wat i like abt him is his energy n tenacity. He shld go out on loan to get game time but if we clear out diaby n rosicky, he shld stay so dat we’d hv 6 midfielders for 3 starting berths. Sounds gd enuff for me. Oh n we nd to get rid of denilson as well. He was slacking of b4 he went back hm, and isnt faring well there either!

Of course he could go to chelsea, they need a whole new midfield? so long as we dont sell him to them……

send him to Greece to collect taxes!

Frimpong will come on knockin hehe

Matt
Click to flag and open «Comment Reporting» form. You can choose reporting category and send message to website administrator. Admins may or may not choose to remove the comment or block the author. And please don't worry, your report will be anonymous.

So Liverpool have lost Lucas for the season… Founds like the ideal loan for Frimmers.

You want to make Liverpool better!!!!!!! Sod them. Let them buy some crappy League One midfielder for 20 Million.

If he’s going to go to a Premier League team it should be one that isn’t going to have a chance to edge us out of the top place(s) by fielding one of our own.

Much better to send him to Swansea, Norwich or Everton so that he gets a chance to bother/bully/break a few Manchester(s), Liverpool, Chelsea and Spurs midfielders this season.

why not send him to Norwich or Swansea. Both those teams play good football and need some tenacity. Plus, (besides Holt at Norwich) there are no real cunts at any of those teams

Gutbukkit Deffrolla
Click to flag and open «Comment Reporting» form. You can choose reporting category and send message to website administrator. Admins may or may not choose to remove the comment or block the author. And please don't worry, your report will be anonymous.

He’s only a wannabe turd!

Like last season, he’s going to be a One Shit Wonder again this year.

Would love him to go to Swansea if he had to go anywhere. As long as he gets minutes though it is a benefit to us