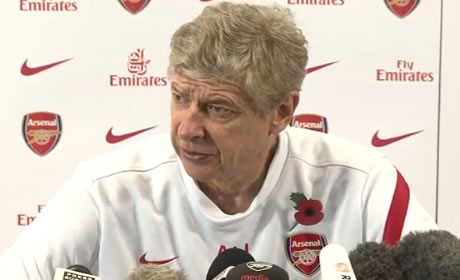 Despite their lowly league position and their struggles so far this season, Arsene Wenger is respectful of the Wigan side Arsenal will face on Saturday.

The last two visits to the DW Stadium have proved frustrating for the Gunners, casually letting slip a two goal to lose 3-2 in 2009-10 and letting 10 man Wigan equalise last season.

Speaking at his pre-game press conference, Arsene said, “They are not formalities. They came back twice in games against us I think, where they showed spirit and quality.

“Wigan are a good team, they are a dangerous side. I think last year was a bit special but overall they had good players. They look like they are coming back with a bit more confidence now and it will be a tough game.”

And the manager wants his team to continue their progress which has been slightly halted in the last week. Playing down talk of Arsenal’s title chances, Wenger said, “The overall view is that after bad start we are in contention to fight for the Champions League places.”

I want Chamakh scoring from a goal kick 😀

Wait, are you talking about an Arsenal goal kick or Wigan goal kick?

I’ll be happy for a George Graham special thank you

I’m for ‘resting’ Ramsey and starting with Benayoun or Arshavin in the attacking midfield position. Also Djorou at right back and Koscielny in for Per. These are games we should not only think of winning, but winning well because the way the season is going, bearing in mind our goal defficiency cause by the old trafford suicide, goals difference may decide a whole lot of things this year: the place for top four, second and third, and hopefully, though less likely, the winner of the league itself.

Ramsey is rested, and is becoming a gun. Once upon a time I would have liked to see if Arsh could weave his magic more consistently in the middle, but the little guy won’t run..

Definitely favour Rambo over Arshavin based on recent efforts!

We will smash these northern monkeys. A brace for RVP, one for Theo, Gervinho will grab a cheeky one and one of the defenders will head home from a corner.

And Andre Santos will dance! 🙂

We are a much better team defensively this year – we can go forward with confidence.

I would love to see the Ox deployed in matches such as this – I reckon they’d be meat and drink to him.

I’ll be happy if RvP “only” scores 1, as long as Ramsey/Gervinho/Theo score. Ramsey’s been getting into great positions, but his finishing’s been disappointing.

Other than that peach against Marseille.

I agree though, the boy needs a breather. He looked shattered against Fulham – not suprising seeing as he hasn’t had a break all season – and the Speed incident must have affected him.

If he were to start on the bench tomorrow, then (assuming he doesn’t play against the Greeks) he should be much more rested for Everton next week.

Come on you gunners!

Agreed. Same with Gervhino. I would love to see ’em score not just for the points but for the confidence boost that would bring to thier already ecellent playing.