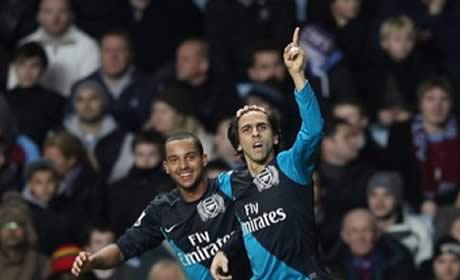 The Israeli international has found his chances limited since arriving on transfer deadline day but has certainly given the boss something to think about when it comes to making substitutions who can make an impact.

“He is well integrated in the group, is a fantastic professional and has a great spirit,” the manager told Arsenal Player.

“He is a very intelligent boy and tonight he did fantastically well when he came on. The changes who came on did very well and stabilised our game I think – Yossi came on and won us three fantastic points.”

Benayoun himself was delighted to have scored his second Arsenal goal, but admitted he has been dissatisfied with life on bench.

“I don’t know if I saw the goal coming but every time I play I’m trying to do my best. Ididn’t play in the last two games and of course you are a little frustrated.  Today I’m glad I got my chance, I got a goal and we took all three points.

He was also keen that the Villa win would spark another unbeaten run.

“I think you can see now that the team is getting together and playing much better. When you get good results you will always get more confidence in the team and hopefully now we’ll start a new run of winning games.”

With Aaron Ramsey looking like he could do with a rest Benayoun’s contribution against Villa means he’s likely to start at least one of the Christmas fixtures.

For me yossi should always be our first choice sub when not playing, whatever state the game is in he will always come on and have a positive impact

Sub? Dude, he should be starting ahead of Ramsey.

Always looks lively the wee lad. Surely a better option then Arshavin at this point in time. I’d cash in on AA at the end of the season and give Yossi the next 6 months to play for his place.

I’d cash in on him in January.

We have enough back-up as it is in midfield.

Wasn’t exactly thrilled when we signed him but his attitude and energy have won me over.

We can only guess 😉

I love what Yossi has done at Arsenal, seems to have a great bond with the team and certainly always puts in a shift. It is frustrating to think that some of the older guys we have let go could of played a role like Yossi has.

Difference is, Yossi wants to work hard for his place and in his profession. It looks like the Arsenal way really works for him and he’s enjoying pass on his knowledge to the younger players. A lot of our ex-older players seemed to want things handed to them on a plate rather than work for them. Bergkamp used to sign the 1 year contract, as is Wengers policy at 32/33 and not 30 as spouted by the media, and prove to Wenger that he should be offered another year and then another year, etc… until he felt as a player… Read more »

i think he’s referring to henry and viera. Henry + eduardo in 07-08 season would have surely won the title for us. But situation at that time was different. Arsenal were financially crippled and arsene was too involved in his project youth.

I think Vieira hs shown his true colours unfortunately by following the money train. Wenger offered him a position on the youth coaching team but he turned him down for his present job. Eduardo requested to leave as he felt he probably couldn’t get back up to the speed needed. Hence choosing a slower league with less pressure to always succeed (no offence to the ukranian league) Henry has always stated that he felt it was time to move to give the younger players a chance as he saw a selfish side in his own play. He always wanted the… Read more »

When there’s so many cunts in football it’s refreshing to have quite a few genuine nice guys in our team. Yossi is up there.

Goes without saying that almost every gooner would prefer him, Rosicky and the Ox above AA23.

Rosicky has really impressed me this season. Even though he’s only had a bit-part role, he’s managed to make an impact whenever he’s come on and always works really hard.

I love Yossi, and definitely want to see him make a permanent move. A much better option than Arshavin.

A good squad player to have, we could use more like that. Why Arshavin is still coming on is anyone’s guess, perhaps it’s to try and keep his transfer value up. Though what he does on the pitch can only bring it down.

It could be that Wenger still intends to use Arshavin as Gerver’s replacement when he goes to the ACN. This would be bad news.

I think we shouldn’t forget that Wenger sees Arshavin for 5 days a week and we only see him for 20 minutes, maybe he looks a lot better in training. But of course what he has contributed to our season so far is not acceptable

Hats off for the pun.

It was Yossi’s 3rd goal for us not his 2nd – he scored his first against Shrewsbury , his second against Olympiacos away and of course the winner last night.

Yea- wasn’t too excited about him coming but with Rambo looking like he could do with a little rest (even gervy in fairness) I’m happy for him to start there, just behind VP. He looks a bit of ljungberg, but mind you Fred’s a ledge.

I am very excited and wet every single time Benayoun plays. Like drenched.

I want the players that play for my team to work hard regardless of form, that’s why I like yossi and have no time for arshavin. As long as they have spirit and the will to work for the fans and the club, fans should and will back them. Arshavin shows nothing ide take yossi over him every time.

The same arshavin who was most wanted by fans in january in 08-09. Ppl were orgasming when he finally signed for arsenal. Now same ppl slack him ridicule him.

Now arsenal sluts want podolski. If he doesn’t signs/perform i can imagine the reaction from all corner.

Ermmmm.. I think there’re more people who agreed to the signing of Yossi. I for one is a fan of him since West Ham. We all love it when we signed Arshavin but thats before we realise he was a lazy meerka, although I do hope he start to perform again. I rather see someone with less talent giving 110% like Jenkinson. It’s not as if he had one bad game and we booed the living crap of him and face it, do you rather pay someone £80k a week when we can offload him for someone that is hungrier?… Read more »

Here we go again with the Football Manager clearouts. You can’t get rid of at least a third of the playing squad and then replace them all without this causing problems. What if the replacements don’t do any better than the players we let go? Take a hit on the transfer fees, go ah well and then do it again? Wenger clearly sees something in Diaby so he won’t be released (and i generally trust Arsene’s judgement), Rosicky has worked his ass off in the games he’s played in and has changed his game to be less technical and more… Read more »

Walcott can learn a lot from Yossi’s attitude.

Walcotts problems are concentration and composure that can only be learnt through experience.
I think Ramsey/Wilshere could learn more as this is Yossi’s favoured position and he’s done it for many years at arguably the highest level. Fighting relegation at WHU to fighting for the title at Chelsea (we’ll forget his time with Liverpool as it did nothing for him).

Anyone remember the game Liverpool 4 – 4 Arshavin. Arguably one of the greatest Arsenal game I ever saw (Along with the Barcelona and Milan matches).
Funny how of the 3 goal scorers, 2 are now a shadow of their former selves and the hero of the night now wears an Arsenal shirt. Always thought Yossi was underrated even at Chelsea, and hope his move could be made permanent.

Walcott’s maturity is my biggest concern. The attitude he had when he was subbed off in the Man City game demonstrates he still lacks maturity. I fully understand why anyone will get annoyed when subbed off, but still, these sort of attitude have negative influences not only on himself, but on us in general, and it is this sort of attitude that can cause internal conflict within the team. Yossi, on the other hand, is composed, mature and patient. Doesn’t complain about the lack of playing time, or about anything at all, really. He just gives it his all when… Read more »

Probably referring to his reaction to getting subbed off?

The thing with arshavin is not with his attitude and i know he cares about ARSENAL just by remembering the last seasons Barca game at home after he scored the winner he didnot stop for the celebration because he was very disappointed that a mistake made by him later could have robbed us of the victory . And i love him for his honesty when in a game(may be wigan? not sure) he just shrugged his head at a ref for awarding him a penalty when the opposition defender had made a good tackle to win the ball that just… Read more »

Do the crowds even sing ‘he’s five foot four!’ anymore? Perhaps if we got behind arshavin a bit more he would improve? Possibly?…

Have to say, I love the character of this years team. I think guys like Yossi, Arteta and the Verm are consumate professionals who are extremely confident without any arrogance or much ego. Guys like Gallas, Nasri and TGSITHOTW, although decent enough players on their day, did not add any positives to the group mentality and were terrible influences on the younger players at the club.

Have to say goodbye to AA lads he’s just not doing it for us at the moment, I think Walcott could be alot better if he just didn’t panic as much in the shooting position :s and not looking forward to us not having VP next season cause of man shittys money 🙁 Plus Steve I think u should put ur CV in for the next mangers job at Arsenal because as good as Arsene is (or was) I still don’t believe he’s spending the money he has on buying worldclass players to keep us where we belong just like… Read more »

i think gooners should give AA chant a try the next time he appears at the emirates.since the team is also in good form it can only be good to encourage a player in the bad books of fans.i totally dislike AA this season but honestly speaking he still has lots and lots of quality.he personally also has a point to prove in the euros….remember it was the last euros which saw arshavins rise….he will want to do well and he loves arsenal and the boss believes him