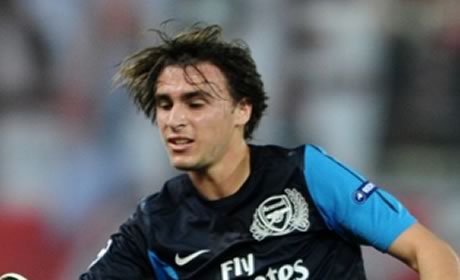 Arsenal defenders Ignasi Miquel and Per Mertesacker are both relishing tonight’s FA Cup tie against Leeds, but for different reasons.

Of course it has,” he told Arsenal Player. “We know it is the oldest competition and a big thing.  If I could be around and play in the FA Cup it would be a big thing for me. If I can get more minutes with the first team it would mean a lot.”

While Mertesacker will make his first appearance in a competition which is well known in his home country.

“The FA Cup in Germany is very famous,” he said, “and it is very good to be part of it – it is a great feeling. Hopefully we will go through the next few rounds.”

Neither is taking the threat of Leeds for granted though, as the cup has a long history of giant killing.

“Leeds are a tough team right now so anybody that plays has to be strong”, said Miquel.

“Any game is hard for you, you just have to get out on the pitch, work hard and do everything as best as possible. It doesn’t matter what team you are playing against, if you want to win you really have to give everything.”

Sentiments echoed by his colleague, who urged his teammates to be decisive tonight, “You have to be very confident from the first moment. Confident that you are part of the Premier League and the Champions League.”

Arsenal will have Thierry Henry on the bench tonight while the manager has to decide how best to rotate his squad ahead of Saturday’s trip to Swansea.

How Have we gone from our centre back crisis to having one of the most promising groups of cb’s in football. Miquel and Bartley have huge potential and its note like any of Kos, Mertesacker and vermaelen are old! Now lets sort out our left back once and for all (a problem even with clichy imo) and we will not be known as defensively weak for many years to come!

Imo our squad is closer to being complete than it has been for a long while. It is a complete freak we are without our full backs but unless gibbs can prove his fitness I think we do need to invest at lb. The only other area that needs to be sorted is the back up striker. Now I dont know if that is going to come from one of the youngsters we have, but if not I would like to see us go for a proven guy from a club futher down the League table. To me it makes… Read more »

Can’t watch this one because its on fucking setanta.. can’t they go bankrupt already!? Good luck to the lads. 3-0 to the Arsenal. Park, The Ox, and a welcome home goal of the bench from Titi

It’s on ESPN here, and ESPN is free this month on Virgin Media, Branson has actually done something useful for once, as long as you’re with Virgin, otherwise you should probably resume service with the voodoo doll.

Most pubs have ESPN, go there. I’m sure you live in a couple of miles radius to a pub showing the game. I had to let my ticket go because I have to work so i’ll be listening to it on 5 Live, you could also do that if you have access to a radio.

Not in the UK lads, Australia. Setanta have the FA Cup games here. I’ll be watching on a stream if I can find one

Can anyone post up a decent stream for this guy?

You can watch it live for free on the “France 4” website, commented by former gunner Emmanuel Petit
C’mon Arsenal!!

for gods sake
Reply to  Plev

wiziwig.tv. if you think i will pay money to murdoch in any shape or form think again. just becuase its not on sky does not mean he wont make money from this. enjoy the match. i recomenmend the Bloodzeed stream but you only get to watch his twitter at half time.

Setanta? What kind of bullshit is that?

Ryan you are a trueLAD. Sweet.

RYAN.GAY.4.AFC
Reply to  GOONER up

come on wenger. let the Ox out the stables!

Time for him to put Leeds out to pasture…

Except that news story has been posted a few times….

several places on that thing they call the internet shows the gunners in action.

loads of decent streams out there, just google it, try ole ole tv or firstrowsports and it should be streaming in your living room

Lol i’ve warned the missus that if Henry scores I might cry!

Am i turning gay??

Yep u are!
But saying that I would cry if Bergkamp returned!!
Am I gay???

Note to the anti-Murdoch brigade. It’s Sky’s high prices that makes the Premiership clubs so rich. Not nice, but very true.