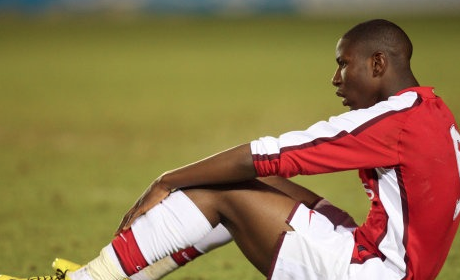 Like many aspects of life, the Arsenal Academy has its ups and downs. The intake of scholars at the start of last season, for example, contained several players who were never likely to challenge for a first-team place. The group above them, however, contains a greater spread of talents, with three players having long been earmarked as possessing the potential for progression.

Benik Afobe, Chuks Aneke and Nico Yennaris have played with eachother for so long that they probably know all of the intricate facets of eachother’s games inside out. The trio rose up the ranks of the club’s Hale End Academy together and now find themselves on the periphery of the first-team squad.

Several of the players that they lined up with at junior levels have since departed, but these three have continued to prevail having always stood out due to both their technical and physical attributes. All three have represented England at various youth levels and have featured in some capacity for the first-team, but, despite the similarities in their career paths, they are all very different types of players.

Afobe, for example, is known for his clinical knack in front of goal, which he has demonstrated at various levels, having first come to the attention of many with his goalscoring feats for the under-16s, whilst also playing a key role in Huddersfield’s push for promotion last season that came perilously close to fruition. He featured for the first-team in pre-season, impressing against New York Red Bulls in the Emirates Cup, but has missed much of the campaign due to injury. However, the 18 year old is close to a comeback and could experience another loan spell before the season is out.

Aneke, who is currently on loan at Stevenage, often operates in the playmaker role and is an efficient conduit between defence and attack. His ability to instigate attacks has long been evident at Reserve level, where he has used his almost telepathic combination with Afobe to devastating effect on several occasions. He hasn’t made quite the same impact out on loan just yet, but, with his deal at the League One side having been extended until the end of the season, there is plenty of time for him to improve in that regard.

Yennaris’ qualities have already been discussed in previous articles, and his adaptability to operate efficiently at right-back or in central midfield have seen him become increasingly involved with the first-team this season.

The three are yet to take to the field together in a competitive game for the club, but, perhaps as early as next season, such an event may happen, most likely in the Carling Cup. It is perhaps stretching the point to suggest that all three will go on to have long-term careers at the club, but they all appear to possess the capabilities to carve out successful careers elsewhere if things do not go to plan. If the above scenario does occur, however, it would be a tremendous achievement for the club’s coaching staff and will serve as a reminder to those coming through the ranks that, although many fall by the wayside, if you have ability and persistence in abundance, you are likely to receive your chance sooner or later.

Thank goodness fr that. A positive Arsenal story. Must be the first anywhere for a million years, well it seems it after recent shit.

There’s plenty of positivity out there, who didnt have a good old laugh today at that old mushy faced bag of cunts? – you obviously have enjoyed that and why not? john terry is still a cunt, and night still follows day.. Sure its a transitional season, and maybe we havent got the rewards over the last (insert number) years that we feel our football has deserved but were still the arsenal and everyone else are still cunts frankly.. Milan in the champions league champions league, FA cup and a decent shout at the top four.. not to mention return… Read more »

Just curious, how many youth team players apart from Bendtner,Wilshere,Frimpong,Djourou have actually gone on loan to PL teams? Because I’d like our players to go to PL teams to gain experience. Utd have benefited immensely with Welbeck and Cleverly .

Works both ways, look at Traore and Jeffers the donkey.

Not sure whether Jeffers can be counted as a youth team player but yes with Traore,I agree.Still would be nice if more of our players get to play the top level. I’d have preferred Vela or Denilson to go to PL clubs so that they could come back and fight for a place at Arsenal.

No he wasn’t but he did go on loan to Everton so doesn’t make much difference. Also Vela went to West Brom last year and failed to impress.

I know Jeffers was shite for us, but he was bought because when he was at Everton he looked like a real class act. I’m still slightly mystified as to how to turned out so crap! Last thing I heard he was scrapping about in the SPL. What a fall from grace!

I can’t think of another player we’ve loaned to a Prem side other than those you guys mentioned.

Jeffers is currently in the Australian A-League. In one game he was so anonymous he was taken off at half time.

Wouldn’t mind seeing Afobe come in for Chamakh. If he’s really as clinical as you say then he should be given a shot. If he can really cut it he will.

I think the issue there is the number of games he’d play – chamakh has only played a handful of games, and at afobe’s age you want to play as much as you can.

but but but..Chamakh has a very good ‘hold up play’

I would love to see these guys make it, unfortunately for Aneke he is in a position with a lot of competition, although besides Diaby (can we count him?) none of out ACM posses his physical attributes. I hope one of the young strikers we have at the moment comes good. Surely out of Campbell, Afobe and Silva one of them must make it and be a decent back up and understudy to RVP. As for Nico I think he will be an extremely useful little player and like Coquelin I could see him becoming a bit of a “Romford… Read more »

I hope your right mate. Not sure Parlour would look on himself as a squad player though. We could do with his drive now. Remember that hat trick, against Newcastle I think. What a ledge.

Parlour is one of my all time favourite players but I always considered him as an outstanding squad player, he is the sort of guy we havnt had in our trophy-less years. The sort of player who can be relied on to do a job when your late in a game or injuries mount up. We have always had a excellent first 11 but I feel it is the lack of worthy squad players that has cost us.

Just a few days ago the club’s photographer Stuart MacFarlane posted a great photo of the three of them along with the rest of the Under 9’s in 2001 here: http://www.flickr.com/photos/[email protected]/6735049719/sizes/l/in/photostream/.

Hmm I wonder why the only three dark skinned players made it….. there’s something about that coach in the middle.

umm… probably because they were better?

Nope definitely because the coach was black…I was joking buddy.

Is that Mark Crossley in goals? He hasn’t changed much…

Great article Jeorge, all 3 have definitely got the talent.
From what I saw of Afobe at Huddersfield last season he could also hold the ball up surprisingly well for someone of his age, and he’s got a great attitude

Very [email protected], hope they all get to play for us though.

Just passing this on.

To the tune of Only Fools & Horses……No income tax, no VAT, just been done by Man City. In the dock all twitchy and pale, Harry Redknapp’s going to jaaaaail….

I reckon “third best team in the city” would fit nicer.

“Benik Afobe, Chuks Aneke and Nico Yennaris have played with eachother for so long….” hehehehe

Yes , I am immature

A good positive story and perfectly timed I think. Good luck to all three of them, it’d be brilliant if all three can break into the first team as the relationship between them$ sounds great!

Agree great to get some hope. Of the other A’s Angha and Ansha ( or whatever) are they real contenders for first team? Be great to be 4 A star rated unless it includes Almunima and AA ( sorry no negativity today love Arsenal)

Please some one! What is LANS ?

Question : How many Junior Gunner Mascots have played for the first team?

Answer : Only 1 that I know …. Nico Yennaris