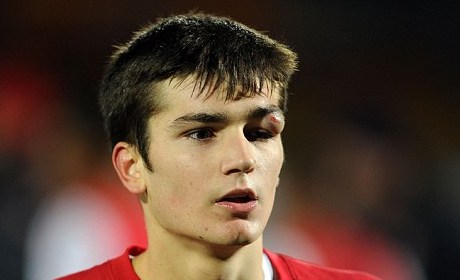 One of the more high-profile youngsters in Arsenal’s set-up, with his transfer from Barcelona last year having evoked anger from the Catalans, Jon Toral has settled quickly into life in London and is set to begin 2012 by being elevated to the Reserve side on a regular basis.

A midfielder who possesses sublime technique and pinpoint passing skills, Toral has shone for the under-18s during the first half of the campaign whilst operating in a deeper-lying position, similar to the one that Jack Wilshere performed in last season for the first-team.

The creator of several goals for Steve Bould’s side, whilst also finding the net twice himself, Toral still has much to work on in terms of the physical side of his game, but his progression to the second-string should provide him with the opportunity to test himself against stronger opponents.

Having made his Reserve debut against Aston Villa earlier this season, Toral is set to become increasingly involved with Neil Banfield’s side in the New Year, where he could soon be joined by fellow ex-Barcelona youngster Hector Bellerin.

Arsene Wenger has been keeping a keen eye on Toral’s progress in recent months and can’t fail to have been impressed with what he has seen, with the 16 year old’s wide array of skills complemented by improving defensive work and an excellent reading of the game.

that pic just show he already has Arsenal DNA , that thing will require a surgery which will cause a hernia problem then a raptured testicle…and he will be out for 3 to 4 months

Probably a mistake to get raptors involved in the surgery though.

I would be pretty pissed if my testicles were caught up in the rapture.

16 year old and already playing in the Reserves.

Should be 16-year-old and already turning up for the first-team I’d say.

whats with the thumbs down for Anon. Cesc was kinda a first-team player at 16. Toral isn’t. I am not saying Toral won’t ever be, he will soon make it and challenge the then prime Wilshere and Ramsey and Brek Shea (I hope)

Looks just like a young Cesc there.Maybe Xavi was right about Barce DNA, all Barce players must be clones and thus share the same DNA to a degree.

SHIT YOOTH SISTEM ARSONAL UR SHIT
WE GOT ADEBAYOR BALE VANTER VART FROM YOOTH SISTEM U SUCK
COMON U TOTENHEMS!

I think I will start supporting Spurs.

You’d fail the IQ test. Yours is clearly too high.

you fit exactly the profile for a spurs fan…congratulations.

stop looking at arsenal sites you spurs scum! youll be nothing soon AGAIN cos redknapp is leaving you! COME ON ARSENAL!

not to mention Modric, Bale & Adebayor – this will be their last decent season for a long long while

Even better if Redknapp stays, then we will see Sp*rs bankrupt in league two in a couple of years…

I’ve lost so much weight since I started supporting Spurs. My brain is now only a half of the size it used to be.

Not quite sure if this comment is steeped in irony, or whether the commenter is lacking chromosones

What you don’t have is a spell check.

We have found the missing link praise be to God oh wait thats all gone now !!!

The more I read downwards the more I start to think the original poster was an Arsenal fan trolling very very successfully.

I really can’t believe so much hysteria and so many people fell for this kind of bait.

I personally don’t blame him, I blame the education system (SISTEM) in the UK.

Rambo Ramsey
Click to flag and open «Comment Reporting» form. You can choose reporting category and send message to website administrator. Admins may or may not choose to remove the comment or block the author. And please don't worry, your report will be anonymous.

Probably one of those fake Tottenham fans who heard about them and said hey I will support them. At that moment there souls were sold to the devil

Although good point about producing Adebayor, Vd Vaart and Bale! The Spurs academy is impressive!

mike
Click to flag and open «Comment Reporting» form. You can choose reporting category and send message to website administrator. Admins may or may not choose to remove the comment or block the author. And please don't worry, your report will be anonymous.

Sorry Tottenham fans this blog is for Champions League club only.

Ha that was a great post, cant even spell tottenham! HA!

WE won more PL title in White Hart lane than Tottenham in their entire history.

This is also a club which has a fucking chicken balancing on a ball.

That was a gem lol

Technically, it’s a “cock” on a ball. Not sure what happened to the other ball/testicle…

since when did greedy come from their youth system. think it was us that got him into the prem then he became lazy. not just with us but Abu Dabhi(spelling) as well

This is why 6 year olds shouldnt use the internet unsupervised. Correct me if im wrong but Adebayor is on loan from Man City, you bought Bale from Southampton, not sure who this Vanter Vart is you speak of? Which one of these is a product of your so called yooth sistem? None. What a douche.

Did your mummy leave you alone with the computer little boy?

Huraa for Totenheim, nekst yer we tro and boy Joey Bartone so he cain eat french fries with mr. van der Fart after the game while Arry troys to become england manager

Go on Sprurs!! what tradition!

Comedy trolling from the illiterate spuuurz fan
Do they have Internet in prison ?

Bet he has “Sperz” tattooed on him somewhere

i bet he had his tattoo misspelled to ‘sperm’ instead of ‘sperz’.

Let the spud have his fun, if God forbid you were a Spud that’s the only fun that you can have.

-Watching their neighbours winning 13 PL titles and playing Champions League football while Tottenham are on the Channel 5 cup playing against the mighty PAOK.

Right lads I think it’s time we gave the Lasagna chef a ring!

The fact that none of you could spot that he was obviously taking the piss is a serious cause for concern.

Indeed. People get too angry on the internet. Just ignore it if it annoys you.

Agreed, never seen so many fall for blatant WUM. The poster does not believe what he writes he just wants your reaction, congratulations guys…

Spurs are a club with a cock and a single ball. The literally don’t have balls! That’s how you know the wont be able to perform when the see the beauty that is champions league qualification. COYG!

Can we use radiation to get rid of his Barca DNA ?

Oh right, I remember laughing at a stupid statement with the handlename “Nasri” and got a few negative votes immediately.

Guess it’s a bit too optimistic for them to realize trolling of this kind.

What the fuck is that shit on his head?

C mno u spurs – you are a retard of the highest order. Blogs – please ban this fecking muppet.

feygooner
Click to flag and open «Comment Reporting» form. You can choose reporting category and send message to website administrator. Admins may or may not choose to remove the comment or block the author. And please don't worry, your report will be anonymous.

Please ignore the troll. We’re better than that.