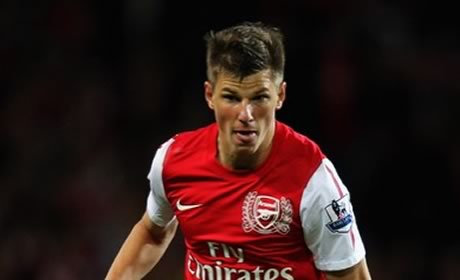 Andrei Arshavin says that Arsene Wenger’s decision to leave attackers on the pitch during last season’s home game against Barcelona paid off in the form of sparkling wine produced in one particular French region.

Speaking to the official site, the Russian said, “We were 1-0 down and we had to break down Barcelona. The boss took a risk and left six or seven offensive players on, and if you take a risk you drink champagne. I think every player wants to be on the stage like this.”

Arshavin has struggled this season, caught in the crossfire of bad form and an untimely Wenger substitution, but his assist for Henry’s Sunderland winner was his third in recent times and perhaps a sign that he can contribute for the remainder of the season.

And what better place to remind people of his obvious, but mercurial talents, than the San Siro?

“Before the draw I wanted AC Milan, I don’t know why,” he said. “Maybe just because it is a nice atmosphere when we play teams like this and you are more excited to play. I like that we have them.

“To be honest I did not see them for a long time in any matches, I just know the players who are playing there. I think from an attacking side they have a lot of different players like Pato, Robinho, and Ibrahimovic, who are all dangerous.

“I think you have to be more focused, yes. Against all Italian teams it is difficult to play because they are all very tactical – all Italian football is like that. They do not give you a lot of space, they try to close down and put a lot of pressure on you in the middle.”

It’s a tough task for this inconsistent Arsenal side, but let’s hope that come the final whistle tonight the players are drinking a nicely chilled cuvée de prestige.

I’d love to see him back at his best again, or as close to it as possible

Agreed. It’s so frustrating that we’ve got a player of such talent and ability, and for one reason or another, we don’t get the maximum benefit out of it.

Thought that pass to TH on Saturday was sublime. I agree with James. A confident in form AA can make the difference. Tonight we just have to be better than AC Milan, and for the rest of the season, we just need to win more games than either Chelsea, L’pool and Newcastle.

This is not impossible, in fact it is not even improbable. Especially if AA can continue to deliver as he did in that cabbage patch last week. We can do this.

I really hope for his sake that, now the russian winter break is over (this still seems to affect him despite him now not playing there for 3 years), he can finally start to get some sort of form back. He’s a bit like Taarabt at QPR, in that when he wants to he can do the impossble but he almost doesn’t have the confidence to think he can do it every time. I’d like him to have a run in the first team as, until his injury, it showed it was helping Fabianski to not be Flapihandski. Ironically, the… Read more »

he seems a bit fragile. In a way, I can think he is a centerpiece in what bergkamp was trying to say in his interview with the telegraph. Arshavin shines when others take responsibility. He is no leader, but a great attribute if the rest if the team are really fighting for it. No coincidence that he finds henry, i think in his brain he thought, well, if i complete this amazing pass im sure henry will put it in. so he didnt go for the safe option, to try and get a corner or such. In a way similar… Read more »

It continues to baffle me how every Arshavin commentator always misses the fact that he’s one of the world’s best 2nd strikers! Played wide, he is ineffective, bored and uninterested. Play him in his preferred position, you will get the best result. In any case, I also do not understand this preoccupation with tracking back. I have seen teams like Spain and Brazil win world cups by offensive superiority. Its not like Arsenal does not have similar ability but is it applied correctly?

in the 70’s and maybe the 80’s but not now. Do you think Man C bought Clichy because he is a great defender? He’s there for his offensive capabilities. If you have both wingers and defenders running at you, you need to defend in similar numbers

Because recently when he has played behind a striker he has still been largly invisible. This could be down to loss of form, lack of confidence, lack of authority (considering he is/was captain of Russia, it seems strange), etc…. For someone at his age, he should be more willing to work for the team in whatever position he’s been given until the time that we are able to play him in his preferred position. He reminds me of the kid at school who could score numerous goals a game but you had to pass directly to his feet. He wouldn’t… Read more »

Yes because Ramsey and Vermaelen scored 4 goals at Anfield and had to play upfront by themselves against Stoke…..

Really getting pissed off at the arshavin haters…

@MAllen, whilst I respect your statement, do you think if Arsenal play City with a hot striker , a cooking Arshavin and effective midfielders, Clichy will bomb forward every time? Leaving a brewing counter-attack behind him? A big team like Arsenal should be able to impose play on opposition like that but alas, the days of Bergkamp, Overmars, Pires and Henry are gone!

@Cygan’s Right Foot- I do understand football is a game of responsibility but some players are never good with shackles and imposing instructions to their game. Doing that will give you a robust institution but not an attractive one. Football is showbiz and needs to be attractive whilst being effective. Arshavin needs freedom to do his staff, licence to have a go at opposition as he wishes , to manifest his talent and wickedness on the opposition, bewitch them, not to carry out a thousand instructions! That kills the beauty of Arshavin and his game. OK, why not let him… Read more »

While I do agree that football should be attractive, I am of the opinion that our best team (that i remember) contained Seaman, Adams, Keown Bould, Dixon and Winterburn. They were solid defensively and that allowed our offensive players to do what they needed to.

Football has changed since those days however, and (no matter how much Arsenal fans hate them) Barcelona have shown the importance of defending from the front to make sure you win the ball back high up the pitch to stop teams getting at your goal.

Anyways , I will sign off by saying I have played football before myself and it is easier to play when you play in your best position and people respect your preferences. You play better when you are happy , better when you have the ball, so you do not have to be chasing someone all the time! Oly misgiving with Arshavin is when hes given the ball away at times but It might be because he was forced to play wide anyway. I know hes paid enough to be played at centre half but money is the root of… Read more »

Anyways , I will sign off by saying I have played football before myself and it is easier to play when you play in your best position and people respect your preferences. You play better when you are happy , better when you have the ball, so you do not have to be chasing someone all the time! Only misgiving with Arshavin is when hes given the ball away at times but It might be because he was forced to play wide anyway. I know hes paid enough to be played at centre half but money is the root of… Read more »

I’m going to take about 7 risks tonight.
I’ll be wasted.

Do you really need that many copies of a board game?

Yes, one for every house.
Now where did I leave my soy latte?

I jest, of course.

Seeing as its you lot and those little turds on half term I’m breaking my post embargo. Big of me eh?!

I’d love to see AA get back to his best but then if not we should keep him anyway. He’s like the new Eboue. Also, I find his intelligence, insight and especially his pragmatism refreshing.

Once retired, he should be kept on as Arsenal’s Equality and Diversity offficer

I say give him some game time tonight. He’s one for the big games. 4 past pool that night, and then that shirt over head after barcunts and he wanted milan before the draw, give him milan, they were meant to be.
Either that or he had too much frustration at not playing and he secretly wanted us out, just to get back at AW. How could he not want APOEL? or bassel.

Arshavin is of the fearless kind who will shine on big occasions. He will unlock the most difficult defence for you, as long as you do the defensive work for him.

love this guy and think that his perceived failures are as much down to arsene and the rest of the team as it is himself. yes, he’s had a bad run but I for one don’t think it’s because he’s not good enough or not trying. it just hasn’t clicked as much as we thought it would, especially after the red-hot start where, let’s not forget, he played a big part in bringing us up to 4th that year he arrived. he’s a unique talent, and it’d be great to see him find a bigger role.