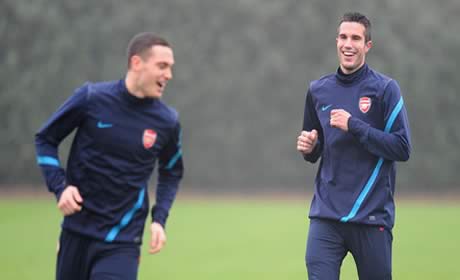 Arsene Wenger says the influence of his captain, Robin van Persie, and his deputy, Thomas Vermaelen, has brought a new energy to the Gunners dressing room.

In contrast to some of his predecessors, van Persie has taken the role of captain by the scruff of the neck. As well as Robin organising off-field events and get-togethers for the players, his wife, Bouchra, has brought many of the players partners together, between them fostering a real sense of team and club spirit.

And the manager is delighted at how Robin has embraced the role, saying, “Robin has grown into a great, great player, a great leader.

“Robin has taken his role very seriously and has become not only a great player but a great leader for the team and credit to him for that. And Thomas is vice-captain so we are bit under the Dutch influence.”

Yeah, Thomas is Belgian but having to come to us from Ajax we know what he means. Wenger also thinks that last season’s game against Barcelona at the Camp Nou, when van Persie was ridiculously red carded, will provide motivation for the skipper as we prepare to face AC Milan tonight.

“Yes, I believe that was hugely frustrating. I believe as well when he was sent off that he didn’t deserve to be.

“It was also a big frustration as he wasn’t prepared to play that game. Everybody said he could not play because of his knee problem. I decided very late to play him. He had to dig deep as well maybe to play the game. But this year he is in a much better condition.”

At the other end, Thomas Vermaelen will face an old Ajax teammate, Zlatan Ibrahimovic, and knows it’s going to be a big test despite the fact he’s more than familiar with his opponent.

“I played with him a lot of times when I was at Ajax,” he said. “When I was playing regularly he had left already, but I had a lot of sessions with him when I was a young player.

“I know his qualities, like everybody does. I played against him a few times, like when he was at Barcelona, so I know he is a strong and technical player, one of their main players. It is up to us as defenders to keep him quiet tomorrow.”

I love the friendship these two have struck up, always makes me think back to that little run-in they had when Verm was at Ajax (think it was during emirates cup?)

Hopefully his obvious Arsenal DNA is enough to keep RVP with us. Failing that, lock him in a windowless room with his new contract, a pen and TV5.

The verminator is a great player. He was badly missed when he was out.

also big admiration for kos. He has really turned out to be a class-act for us and a good example for other players. Confident to have Kos and the verm putting ibrahimovic in a cage tonight

yo! i am with you all. verm too underr ated to the rest of the world but we know what he is. rvp-class!

Goonersville
Reply to  guns and bullets

Yo yo !
I had a white one with fido dido on it

Einstein
Reply to  guns and bullets

Thanks, yo! We didn’t know that.

Wasn’t she one of the Thunder Cats?

Ha ha ha, Milan think the too strong for gunners but, arsenal (gunners) never give it up. The alway go for and the did it.

read an interview with mikel arteta in el país this morning and he was full of praise for his captain..being a great leader on and off the pitch without actually talking too much but setting an example for all of them. and that, at the moment, rvp was unstoppable and really on fire (he literally said ‘está on fire’ … 😀 )

Honestly, I wonder at times why RVP wasn’t given the armband earlier.

Simple, injuries would have limited his playing time thus rendering him an uninfluential captain.

Very pleased with the leadership RVP has shown this season and TV5 is an excellent vice captain.

I also have truly loved watching Henry while he’s been back. Every shot of him on the bench he’s talking with whatever player he’s sitting next to and talking about what’s going on in the game, what should’ve happened (if there was a bad pass or movement), etc. It’s very positive to see rather than the few outliers like Almunia & Squid just huddled under their blankets wishing they were good enough.

The Verm is Flemmish Belgian. Flems are ethnically and linguistically Dutch.
Belgium isn’t a healthy country and the Walloons consider themselves French whilst the Flems believe themselves to be Dutch.

Thus Wenger is most probably correct to call the Dutch speaking Verm Dutch.

And we’ll need them to absolutely walloon the flem out of Milan tonight.
*sorry