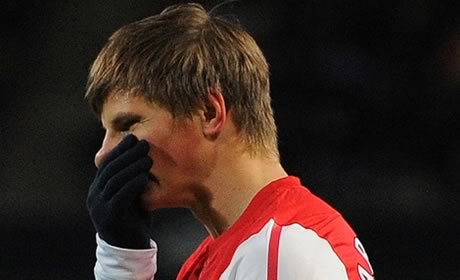 Andrei Arshavin, right up there with Arsenal’s most expensive signings of all time, will turn out tonight for the reserves against Norwich.

The Russian is not alone in being a first team squad member involved however, and it appears that Arsene Wenger wants to boost the match fitness of players who haven’t been called on in recent weeks.

Arshavin is joined in the squad by Marouane Chamakh, Ju Young Park and Yossi Benayoun. The Israeli described his lack of involvement against Sunderland at the weekend as ‘disappointing’, easy to understand considering the way the game went, and while the inclusion of big names is clearly to keep players sharp, perhaps it’s also a sign that he’s considering some rotation ahead of Sunday’s game against Sp*rs.

Tonight’s fixture also serves as a comeback for two young Gunners. Carl Jenkinson returns to action after a three and half month absence due to a stress fracture of his back, while Benik Afobe makes his first Arsenal appearance of any kind since picking up a serious groin injury in September.

The full reserve squad for tonight’s game can be found here.

In other news Craig Eastmond has moved to Wycombe Wanderers on a month long loan deal where he’ll hope to get first team action and become a regular at the local Nandos.

Glad to see Jenkinson is returning

Diaby???? He was suppose to start after three weeks and errr that was around 20th of Jan!!!! After he had small small small muscle problem and come back in ten days, that was errrr end of Oct!!!!!!

Surely Diaby is irrelevant to this article, unless we have a Reserve Medical Centre somewhere.

Was just last night watching the 08/09 season review and wondering where it all went wrong for Arsh. No bad luck, no career ending injuries, just plain lack of commitment on his part.

Such a shame, was really looking forward to seeing him in his prime with us, this is all his own doing though sadly.

It all seemed to go downhill after Russia failed to qualify for WC2010. He seems to have lost his passion for football and almost looks like he’s doing just as a job rather than a hobby he gets paid an obscene amount to do.

Then ironically he stated that Russia qualifying for Euro2012 made him want to work harder! So he basically stated that he lost interest in football as long as Russia weren’t playing in a major tournament. Never mind the club that pays him his salary. No wonder he doesn’t improve.

I feel like when it comes to performance with players like Asharvin is that perhaps their problems transcend that of football and could lie in something more personal perhaps.

I would say that playing him out of position hasnt helped his career at all. When you look back to the 08/09 season you will see that Arshavin was more often then not used as a Striker rather than a wide man because van persie and Dudu were injured all the time and bendnter is shite, but he was devastating. the last time he played there was almost 2 years ago i’d say. His poor performances are pretty much in line with the time Van Persie has been fit and has taken the strikers role ever since. With Ramsey out… Read more »

Good luck Craig. Interesting to see how he copes with League one Nando’s

HAHA. With a name like that, is there a point in commenting? 😛

Who’s this ‘Park’ bloke then?

Some say he is the player that Wenger was forced to buy to raise our profile in the Far East.? Others say he is the player that we snatched from Lille to p*** them off enough so they wont negotiate a fair deal for Hazzard? Perhaps somebody thought he was the Park that plays for the Mancs and we were getting a good player rather than what we got (I still reckon that Dominic Matteo only got picked for England cos somebody asked if Di Matteo was eligible and they assumed he meant D.Matteo – much like the Benson &… Read more »

He’s the ‘player’ who will cost us more than eight million quid by the time he leaves next year (source: AST).

It’s a good thing that we’ve got a manager who has a degree in economics, otherwise we could have wasted money.

With that squad, they had better win (surely!)

You’ve got to wonder what the Arsenal dressing room sounds like right now. First, we had Miyaichi calling it “incredibly tense” and now we’ve got Benayoun, Chamakh, Park, and Arshavin turning out for the reserves. Benayoun, Park and Chamakh, I can understand … -ish. But Arshavin (our unused substitute from both Milan and Sunderland)? And I don’t buy into any ‘fitness’ spin on this. Match practice? Maybe. But fitness can be improved/maintained elsewhere with a diminished risk of injury. Still, I suppose it’ll be worth passively following the twitter feed now that the Champions’ League’s lost its sheen. Hear that… Read more »

Match fitness is different to just personal fitness. That’s why players coming back from injury always play a few minutes here and there before playinf a full 90 minutes.

He should be transferred to any russian club before friday, we need to clear these shitty players out the club..

With just over 3 months left before the season ends, getting rid of squad players would be an awful decision. You need to cover for injuries, which we are getting a lot of right now.

I honestly would like to see Park, Chamakh and AA23 all playing on a front line together with AA23 dropping in just behind Park and Chamakh up front. I say let these guys fight it out and show who’s got the quality and who should be playing with the first team. Lord knows our current first 11 aren’t getting it done (RVP aside, but look who his support is). Hopefully they all get a good 60+ minutes each. Welcome back Carl Jenkinson, glad he’s healthy and can possibly help out the defense and show Theo how to properly cross the… Read more »

Wenger bought Park presumably to commercialise the club’s merchandise in SK.I believe he was never going to be part of the 1st team set up.Wenger’s plunger into the market smacks of a desperate man. He has been given too much time to turn things riound and yet he has not done so..He has stuck to his guns when changes with regard to tactics and player purchase were of utmost importance. I f the gunners go about the game with normal possession and ceaseless passing instead of shooting,don’t be surprised the spuds whack the gunners by three clear goals.The gunners defence… Read more »

why didn’t we go for Keisuke Honda?
Great commercial opportunity and he would bang in some free kicks for us

Being the fashionista that Honda is, claimed said he prefers to ply his trade in Italy…

Honda is not a “top top quality” because he might coast a lot of money and not coast as much as the “top top quality” that is Squiliaci, Chamahk, Park, Beny, DJ, Theo, Diaby, Gibbs and Arsha, those who win for us EVERY year the “top four trophy”.

Walcott should be playing for the reserves.

Actually, think Arshavin would have been more effective playing in the middle against Sunderland than Walcott.

But let’s be honest, an absent Walcott (playing with 10 men) is more effective than Walcott.

What a waste! Am feeling sorry for the guy, only God knows what went wrong with his head?! And Nandos that was funny.

Sadly we don’t have a Nandos in high Wycombe. We are blessed with two KFCs and a Texa Fried chicken though.

I want to see Arshavin come on against Tottenham(he will because Wenger cares more about 4th then the cups). He came on against Sunderland in the league and saved us with that amazing pass which not many current Arsenal players could ever do. I feel that Theo Walcott should also leave Arsenal because he is not a footballer.

hope these boys have a great game, would like to see jenkinson back in action, hes a quieter version of the ox i feel, has good confidence to take on players. would like to see chamkh and arsh involved against spurs, as subs at the least, think we’ll need everyone to bring their A-game if we are to win. Plus we need plans A though C, so our tippy tappy, direct hoofs, crosses and headers, anything else to add to the mix cus spurs are looking like a team.. *sigh* bad times..

I think of him as the White Sagna.

I agree, the white tall one…heh

Good…..make him wash the fuckin’ kit as well.

Arsh will contribute assists (if not goals) if he plays regularly. Yes, I know he’s out of the squad for a reason, but am I the only person who thinks he’s the only player (asides Robin) that is capable of those cute, little defence-splitting passes?

Can only imagine the effort he will be putting in at a cold empty ploughed field in Norwich.

I don’t have a Premier League coaching experience but most of our players will perform better under a different approach. Not all players are meant to play the Arsenal way. We still how well they perform under Steve Bould tonight.

anywhere I can watch this online? need somethin to cheer about

Arshavin got 2 in a 5-0 rout. Park, Afobe and Benayoun with the rest. Highlights on Arsenal Player from tomorrow afternoon.

With Walcott form currently shot to pieces, I wonder if Asharvin will replace him on the wing now.

Nah it’ll be the ox, with Zervinyu on the left. Would love to see Arshavin play where Ramsey currently is, give him a bit of a rest

You know that has no place in tactical decisions at Arsenal.

I hope Arseblog will blog the performances of our reserves squad vs. Norwich.