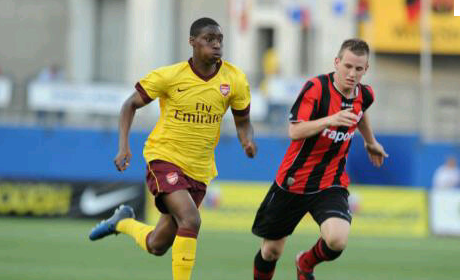 Whether training with the likes of Robin van Persie and Thierry Henry before the AC Milan game, or scoring in two consecutive games recently for the under-18s, this has certainly been a memorable campaign for second-year scholar Jordan Wynter.

The Hale End product featured for Steve Bould’s side whilst still a schoolboy, and was used regularly at that level during his first season as a scholar last campaign, with most of his game time coming at right-back.

This season, however, he has been afforded more opportunities in his preferred deep midfield role and has flourished, breaking up play effectively and instigating attacks. Comfortable in possession, Wynter also possesses good technical ability and, having gone well over a year without a goal, has scored in each of the last two games against Fulham and Chelsea.

The 18 year old was selected, along with schoolboy Brandon Ormonde-Ottewill, to train with the first-team recently, having previously done so a year prior ahead of the game against Barcelona. His next aim will be to break into the Reserve side on a more regular basis, having amassed a handful of second-string appearances thus far.

If he continues at his current rate of progression, then Wynter will surely earn a professional contract in the summer and, with that, more Reserve opportunities should follow.

Nice to see our youngsters on the up. You should do a profile on Josh Rees, he seems to be scoring every game he plays, making a name for himself. Keen to see how he takes his chances.

can suck my fat one