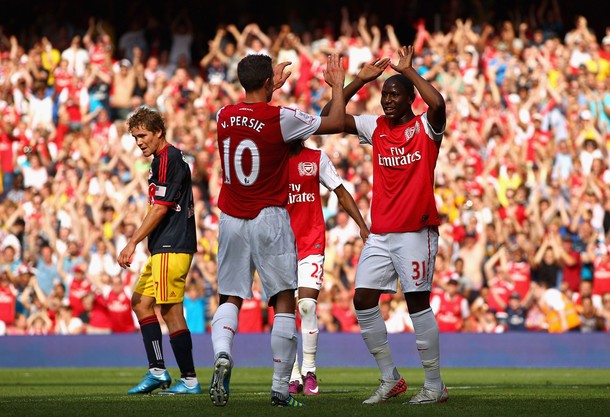 Reading have signed Benik Afobe on loan for the rest of the season after seeking cover for Jason Roberts on the final day of the loan window.

The 19-year-old, who has spent much of the season sidelined with a groin problem, has featured in the last three games for Neil Banfield’s Reserves, completing his first 90 minutes of the year against Liverpool on Wednesday.

A graduate of the Arsenal Academy, Afobe has been tipped for a career at the top of the game by club captain Robin van Persie, with the Dutchman fiercely impressed by the determination of his young teammate to overcome his recent fitness problems. Earlier in the season, the teenager revealed that there had been interest from a number of clubs keen on signing him on a temporary basis, although he was happy to bide his time in North London.

Reading are currently vying for automatic promotion to the Premier League after a stunning run in the Championship and will no doubt be hoping that Afobe’s experience on loan at Huddersfield last season will come in handy during the run-in.

Speaking to the Reading website manager Brian McDermott spoke excitedly about the capture of Afobe:

“We’re delighted to have him, he wanted to come here and that was important because he had other options.

“We know him very well, we have watched him from a very young age. He’s played a lot of games for England right up to the under 19s and then out on loan last season as well.

“He’s a good addition to the squad and will help us with eight games to go.”

I love the lad. Good luck to him.

Have you ever seen him play? He is one of the most prolific strikers we have had in the Reserves for ages…and he bleeds red and white.

A good move, going to a team who are playing well and challenging at the top of the championship. For my money that’s more productive (particularly for a forward) than going to a team struggling at the bottom of the premiership.

Hope he plays well and comes back to force his way into Arsenal’s squads from next year.

Personally, I think going to a Bolton-like club for him is better, the opposition team will all be PL quality (and he’ll get more used to it) while also playing with a hard-working team spirit and one with less technical flair than Arsenal, meaning it will force him to adapt to his environment, meaning he’ll expand his game.

But not all clubs are Bolton-like. Doubt he’ll get gametime if he got loaned to Swansea or QPR, and clubs like Bolton and Wolves already have decent to good strikers…

No doubt there was a condition in his loan that states Afobe must only be loaned to a club with a Nandos in a 8 mile radius. He wouldn’t settle for anything less.

Good luck Benik.
This is a great move for him. A title chasing Championship side. Hopefully he’ll get a taste for success. It’s certainly a step up from Huddersfield last season. He’s on the right track.

Good luck to Benik! Should help Reading out and give him some first team action as well.

Don’t know if anyone else heard about The King flying from the US to London just to visit with Fabrice Muamba. True legend and the definition of class!

Hope he gets game time and bangs a few in.

He’s a great prospect, let’s just hope he get’s some games in the starting XI. Reading have a good youth policy. For example, Gylfi Sigurdsson started his professional carreer there and now he’s scoring in every game in the PL for Swansea. Speaking of that, why not buy that lad to the Arsenal? He’s a real talent and, unlike most of the Arsenal squad, is not afraid of shooting from distance. See for your selves: http://www.youtube.com/watch?v=pdFpMd67BTE
Well this game was a thriller from beginning to end, check it out mates.

[…] the end of the season. Chuks Aneke joins Preston North End in League One, while striker Benik Afobe has joined Championship side Reading. Afobe is interesting, he’s not garnered the kind of hype and expectation that others have, […]