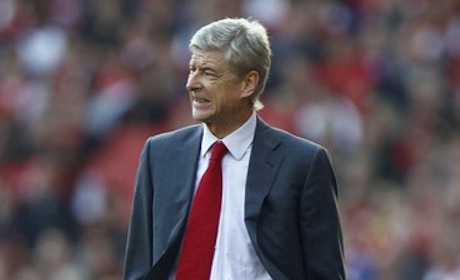 While much of Arsenal’s recent good run can be put down to goals scored, regardless of how late they’ve been, last night’s 1-0 win over Everton was borne out of an excellent defensive display.

The back four and the team as a whole defended cohesively and intelligently, meaning the home side could not capitalise on the amount of possession they had, and Vermaelen’s goal made it a 1-0 double over the Toffees this season.

“We were resilient, focused and with a great desire to defend,” said the boss. “Our defence played very well tonight. I felt it was a bit psychological – we refused to play because we just wanted to keep the score.

“We showed a side of us that usually people don’t know. It was the only way to get a result tonight. It was good to know that we can do that as well. We didn’t panic, we did well on crosses which is usually not our strong point. We didn’t panic and that is good for us.”

And while many were less than optimistic about this team at various points this season, Arsene says he always felt we had the quality to turn things around.

“I was always optimistic, because if you look at our results from October onwards we only had one bad spell when we lost three times on the trot because we had no full backs. The attitude of the team was always good, so I felt we could bounce back.

“We needed to be strong because we were under a lot of pressure and we will need that until the end of the season. Where we come from, we know what suffering means because in some press conferences I had to answer ‘are you playing not to go down’.”

With the Gunners now in third place, there’s a different kind of pressure on us. Playing catch up is one thing, keeping our noses ahead of Chelsea and Sp*rs will be tough and the boss knows there’s a lot of work still to do.

“We know we have a difficult battle in front of us,” he said. “We want to keep going. We must keep our humility and focus and fight for each other.”

Good job lad, I can’t commend you any more than I am commending you now.

Your declaration of being “first” is so important and central to the discussion itself that I have found myself devoid of any care in the world about Arsenal anymore, lest it involves your being first or anything connected to you, because as I have realized, I care agonizingly deeply for you, your well-being, your state of mind, your wishes, desires, everything. Well done sir, you have gifted me a life-changing experience.

seriously, anyone posting these kind of inane bullshit comments ‘first’, ‘third’, etc. should be launched into samir nasri’s giant cunt – which is his face. fucking grow up.

Hey Carlos you shouldn,t be using such childish and crude lanuage here,what
,s your problem ?

Sam you’re on Arseblog mate, the key is in the slogan: ‘it’s fuckin’ excellent’!

We need to keep this defensive resilience and improve our goal scoring ability.
The Verminator will be our second top goal scorer soon!

Yay! St Totteringham’s day is on!

Ides of March, my friend!

I thought St. Tetteringham’s day is the day when it becomes mathematically impossible for the tiny tots to equal our points tally. We still have to wait a little bit for that so that it can be celebrated properly.

I predict 6 more games. We win the next 6 and they lose or draw those same 6
That gives us a 13 point gap with only 9 to play for, anything better will require them to lose all 6 and gain no points

We’re now 3rd and back where should be above the Spuds which at last means there is balance again in the universe. What are the chances of second? 9 games left 14 points behind Citeh with moneybags to come to the Grove………….

yesterdays game at goodison park was similar to one at the grove.
Not just the scoreline but i know the commentators did mention the same line “i have never seen so many offsides in one game.” except that it was us who were the offside team at emirates.
I dont know if it was just me who felt Ramsey looked taller.

This team is really bearing the fruits of playing together for an extended period of time. Wenger always used to say you shouldn’t bring in more than 3 players at once as it would only cause disruption. We brought in 4 (including Yossi) and lost 2 of our most influential midfielders (Na$ri is still a cunt though). Breaks my heart to think of what could have been if the team was playing like they are now at the start of the season. The defeat to Blackburn especially comes to mind. And looking at how shit this Liverpool side is we… Read more »

Don’t long for the likes of Na$ri. In his own words, he was played too much at Arsenal and the Man C bench has done him (and his ever expanding arse) a world of good.
Selfish, egotistical shites like Na$ri, Adebayor & NB52 destroy team spirit. Our recent run of form is largely due to our new found team spirit. We have players who are TRUE gooners as well as employees. It has been a long time since we’ve had that. Let us bask in the warmth and enjoy the moment.

To all Spurs trolls – mind the gap

( aside, that is, from the slim advantage we currently hold. I am keeping all powder dry in regard to this matter, until things are a lot more certain ! )

Great to seegood defensive displays like last night. I wonder has Wenger changed his training plans to include more defensive work. If Kos and TV5 had been a settled partnership from day 1, maybe we’d have coped better without our regular full backs. Grounds for optimism anyway 🙂

Great to see the defence being so commanding, attacking balls on the front foot that previously they may have let bounce. The media reaction to the game says it all about how poorly things are reported. Moyes says they had 5 offsides wrongly given, when tv seemed to show all but 1 were marginal but correct. Then Talkshite report it as if it’s fact and Everyon were so hard done by, ignoring the Rosicky pen because no one actually watched the game for themselves. Teams like Everton annoy me, they have the facade of a tough hard working team but… Read more »

1-0 flattered Everton, in my opinion 3-1 to the Arsenal would have reflected fairly on both sides.

Arsene looks like he’s doing his best Prince Charles impression in that photo.

oh, yeh, and the defence was indeed very good, even though they actually scored a legit goal, but fuck em because Jelavic was a cunt all night.

Exciting times indeed. Looking forward to our trip to the Grove on Saturday.

I’ve only had a fleeting glance at their “goal” ………and Drenthe is onside. But the bloke in the middle of our box looked offside.I don’t think he was ‘coming back from an offside position’. If I was SZCZ I would have been distracted by him, so I reckon he was interfering with play. I think the correct decision was made in dissallowing the goal.

But I haven’t studied it so I’m open to correction.

It feels sooooo fucking good to have overtaken the chavs and spuds in recent weeks.

Midfield Corporal
Reply to  Martin Keown is my hero

No correction required IMO, that’s how I saw it.

I’ve got a problem. It’s about Saturday. It’s about Spurs v Chelsea. We want Spurs to win, don’t we? Or do we? If the Scum beat Chelsea, and if we beat Villa (which I’m sure we will), then we will go nine points clear of the Blues and are almost guaranteed to finish at least fourth. But if Chelsea win, that result will still leave open the possibility that both they and Spurs could finish above us. But I absolutely love watching Spurs get beat – even if it is by another side I loathe like Chelsea. So I’ll be… Read more »

It would be nice if we could avoid a potentially tricky qualifier. So we want to finish third which is possible given the current form en the demise of our North London neighbours.

Martin Keown is my hero
Reply to  Fatgooner

Don’t worry about. Every result will have a positive side to it.

i’m hoping to see a temporal rift through which an enormous rampaging chtulu of unimaginable fearsomeness springs, its hunger for cunty defenders sharpened by aeons without food and it’s loathing of the twitch borne out of being deprived tax for millenia

Chelsea to win, because a: they’re playing Spuds (duh!), b: Chelsea have both CL and FACup games to knacker their dad’s army so are more likely to slip up in the league chasing either/both of those c: they’re playing Spuds and d: mental disintegration – Spuds current run continuing is both hilarious and makes them odds on to finish below Chelsea For what it’s worth if AW is praying for a result on Sat between them, it’ll be the oligarch’s plaything – look at his reaction to english teams being eliminated from europe, it’s all about english teams performing well… Read more »

Carlos
Reply to  the only sam is nelson

also, it would be great for chelsea to come fourth and then lose the qualifier in August.

Adam Watford
Reply to  the only sam is nelson

Presuming we win on Saturday, a draw is surely going to be better for us because it puts us 3 points ahead and that is more valuable for two reasons. a) Spurs may be bouyed but not losing but it also pushes us tantalisingly just on their horizon, an outstretched ‘ arm that just won’t reach ‘ us. Surely that has got to frustrate them and that has be detrimental to their spirit. With the added distraction of the FA Cup ( tragic circumstances aside ), which competition do they plump for ? Losing in the Cup would perhaps deflate… Read more »

We’ll continue our run of form and Chelsea will grab 4th from Spurs. That in itself is hilarious when you consider how far ahead they were.
Europa league is the right place for the Spuds as we can’t have them messing up the CL with their twitching and general shittary.

Ah General Shittary, he was a great military mind.

If the Spuds finish 5th, they will have to eat humble pie for quite some time. It would be hilarious. Also, the media, describing Twitch as the second coming of Jesus Christ himself would look very stupid for considering him as the best manager the premiership has this season.
Next year, I recon they will lose some of their best players to the big spenders. The worst they finish this season the better as the players will be very vocal about leaving.

Old Redknob will still be thebest English manager in the Premier league, even by finishing 5th.

So, I say, FA what on earth are you waiting for ? ‘ Appy ‘Arry will bottle it anyway and stay at Spurs.

There is no problem because there is an obvious solution to this.

In fairness Everton played well last night and probably feel the offside goal was harsh and that they should have got something out of the game.

BUT so was the penalty decision on rosiscky.

If your gonna give CUNTS like stoke bolton and wolves praise all year long for how they defend well you gotta give OUR lads credit also Wenger was right they were great.

Bollocks! We should have been 5-1 up at half-time.