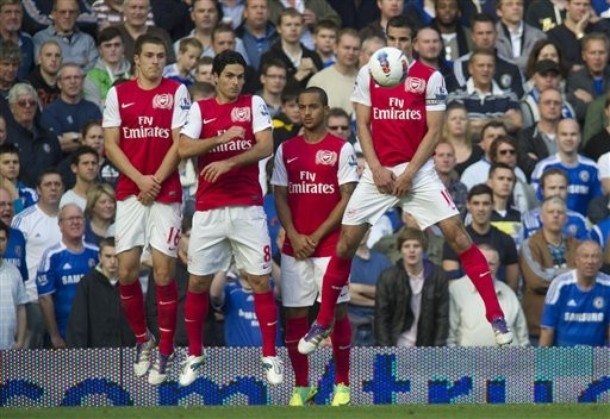 Aaron Ramsey and Mikel Arteta should feature for Arsenal on Monday after Arsene Wenger confirmed both men were back in full training.

While the boss revealed that there were no big injuries following Wednesday’s win over AC Milan he did make clear that a host of knocks and niggles were causing his first team squad problems.

Speaking to Arsenal.com, Arsene stated: There are lots of knocks and bruises but I don’t think anybody should be definitely out for Monday night from the players who started the game.

“[Mikel Arteta and Aaron Ramsey] should be back in the squad. We have to check his [Gibbs] groin but he has a chance.

“[Walcott] has a kick on his hip so that should be OK. Yossi was getting started again on Thursday, I do not know if he will be ready for Monday night.”

With doubts persisting about Kieran Gibbs’ ability to play on a twice weekly basis, the Gunners have been boosted by the news that Andre Santos is finally on the verge of a first team comeback after four months on the sidelines.

Hinting that the next game may come too soon for his summer signing, Wenger admitted that if Gibbs’ is struggling he may have little choice but to play the Brazilian against the Geordies.

“He is back in full training on Friday. He is certainly short [for Monday] because he has not played for four months but I do not really know yet, it is a decision I have to make. We will see first how Gibbs is.”

WTF is with the PIC. LOL

checkout theo LoL.. looks like the only thing missing for him is the national anthem

Its the first annual Who Can Junp Highest While Holding Ones Bollocks Contest. RVP wins, Arteta is disqualified for dropping his balls. And i can’t be sure but I think that might be a cardboard cutout of Theo. Similar to the one that played in the 1st leg in Milan. . . . .

yaaaaaay Andre Santos , the Best LB in the league

I spotted him fondling it a few times in the Milan match.

Good news all round. I look forward to seeing Arteta and Santos back in the first team though I have to admit Gibbs has started to look like a quality lb since his recent return.

He’s always looked like a bit of quality to me. Just hasn’t had the opportunity to display it in any more than two games on the trot.

IF Gibbs can’t play ,Jenkinson or Miquel can

I reckon that, of the two, Miquel looks better on the left than Jenks does.

Good news are always welcome, but when it’s about Arsenal there isn’t any better news than injured player coming back available lol.

missed Santos all these months. showed some great stuff, especially against Chelskeez.

cant wait for santos to be back

new best photo ever.
I also like that I know that we fucked Chelsea in their stinking arses in that game.

worst image ever
I need to rinse my brain out with soap.

I hope wenger doesnt start ramsey & bench rosicky. He needs to play on.

Yeah I agree, I think one of the reasons Rosicky’s returned to his best recently is down to having a decent run of games.
Mind you if he’s carrying any sort of knock or anything it might be better in the long run to rest him for a game.

I hope that so as I think the best role for Ramsey in midfield is the Arteta role, he use to play there before his injury when Fab was our creative/attacking midfielder, he had his best football in that position. If we have to rest one in midfield for this game it HAS to be Song as he has played almost all our games and we need him as CB cover too, DJ needs to sort out his weight , fitness and trim down his body to last season shape. my team will be ………….Zszc…………. Sanga..Kos…TV…Gibs ……Areta…..Ramsey Theo/OX…Rosicky…Gerv/Afobe …………..RVP……………. Subs.… Read more »

I think Rosicky’s safe. Song will have to rest because – like the suddenly eloquent and knowledgeable Gary Neville said the other day – he looks bone tired. He’s been playing 90 minutes for shit loads of games the last few weeks AND apparently he jetted off to darkest Africa for a game during the break, too.

Luckily, either Ramsey or Arteta can do a job in his role.

Arteta has balls of steel.

Good pic. Although personally I would prefer if Theo had the same “not a single f*ck was given that day” kind of composure when approaching opponents’ box.

“starting from the bench”?

I know, right? I mean, they aren’t even benches anymore. They’re plush leather car seats. And why call it a dugout anymore? WHY?

Yeah, it’s as simple as scoring an own-goal in the opposition goal.

Regarding Santos on the Official Arsenal site it says:

Santos is available if he is needed on Monday night to be in the squad. He has been out three months. We played for two months without full backs so we are pleased that we have them back.

Looks like it is on for Monday! Great to have you back Mr. Santos!