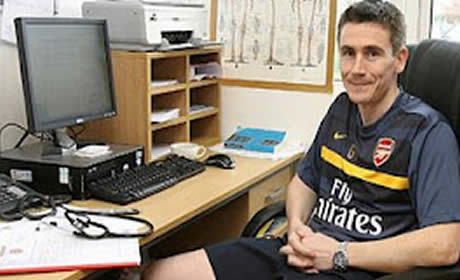 These tests take place annually, usually in pre-season, and often just after a new player joins the club. Speaking to Saturday’s match-day programme, he outlined the screening procedures.

“A full screen includes multiple aspects including a full medical examination, past medical history, past family history and an ECG (Electrocardiogram) which looks at electrical conduction around the heart.

“Electrodes are placed on the players chest and and connect to an ECG machine whilst he lies still. When then repeat the test with the players while they’re pushed to their physical limit on a bike or treadmill, to measure the activity of the heart but this time while it’s working to near maximum capacity.

The club then carries out an Echocardiogram, which examines the structure of the heart, and the results are then studied by sports cardiologists.

Although the sports governing bodies suggest these tests should be carried out every two years, the club ensure that all the players, from first team to academy, undergo them every single year.

However, as what happened with Muamba showed, screening does not always show problems, and the response to an incident when it happens can be the difference between life and death.

“What is critical is the the immediate response and aftercare afforded to the player,’ he said. “The level of training for all pitchside doctors and physiotherapists is extremely high and we all attend annual courses in Advanced Life Support in order to develop our high level of expertise in these situations.

“At Arsenal, alongside our highly trained staff, we have Cardiac defibrillators, Oxygen and Airways available at all times at Emirates Stadium and London Colney.

“While research will continue in depth to try and prevent any cardiac arrests it may be that very occasionally these events will still happen.

“It remains critical that we are prepared to deal with the immediate management of such an incident as the medical teams so clearly were [for Fabrice Muamba].”

This article appears in the Matchday Programme March 24th – and for more information about Cardiac Risk in the Young visit CRY.

Sounds like Muamba’s case was just a freak accident. I heard he’d been screened four times whilst at Bolton, so you’d have thought that, if there was something noticeable there, they’d have noticed it. Besides, the reaction of the doctors at WHL was fantastic, which, as Gary says, is what made the difference. Sounds to me like there’s not much that can be improved upon, bar a ridiculous amount of health and safety checks. I think medical care is at a perfectly acceptable standard, and that Muamba’s case was just a really unfortunate accident, from which I hope he recovers… Read more »

Who the hell is giving this a thumbs down?

Not Spud trolls giving the thumbs down but some Arsenal fans not liking the fact that the WHL physios and doctors are being given the due credit for saving Muamba’s life and making his condition the best they could at the time.

I don’t care what club does what, in the way of saving someones life it really doesn’t matter who it is or who pays their wages. Well done Spurs for your actions that night; for that, you are a credit to football.

I have every faith in our clubs medical staff, they have come in for a torrent of abuse at times, unfairly in my opinion. You can’t legislate for freak injuries, unusual conditions or terrible instantaneous moments of the Muamba ilk, they unfortunately just happen, they are a part of life, not just the game. The only thing that can be done to deal with these kind of things is to have best practices and precautions in place and I have absolute confidance in our teams medical cover, touch wood – their expertise is always around and equally not required.

Have they ruled out blood clots? He could have had a clot which broke away and ended up in his heart. There would have been no way of predetermining this.

I know better than most as about 5 years ago I had a clot in the brain, and only survived (with no lasting damage) because when the shit in the fan (a brain haemorrhage) I had just go to hospital and they put me on life support.

Bloody hell. Good to have you with us still.

The only positives from instances like this and Chech’s is that football clubs can adapt and step up medical care so that if something as bad as this ever happens again the already fantastic medical response will be even better!

That’s basically what happened after the Cech incident. Morinho did his nut over the fact that there wasn’t adequate medical care standing by at the ground and the FA were like “yeah, he’s got a point.”

Now there has to be an ambulance at every game, or something like that.

the only sam is nelson
Reply to  feygooner

I believe Cesc’s condition was genetic, rather than cardiac

certainly if that cunny iniesta was to be believed

(One dislike from Iniesta)

Cygan's Left Foot
Reply to  BC

The Vermintor doesn’t need screening his needs programming. I remember him breaking his leg at Villa, they re-programmed him and played the next game.

What did diaby do to piss GO’D off then???

Fantastic medical crew at White Heart Lane with exactly the right equipment for this massive trauma. I’m glad to see that both the Emirates and London Colney have this equipment, and may it never need to be used!

Glad that we are good medically!

Why is there so many thumbs down to so many reasonable and balanced comments on this thread?

The internet would be a great thing, were it not for the people lurking about on it. The lurkers, if you will.

Trolls. You’ll find them on any thread. In many cases they’re 13 year-olds playing on the computer down in the basement when their mommies don’t know it.

And probably playing with themselves, too.